The ghost of America circa 1979 retains its power to haunt.

America, 1979. Ten grim syllables indeed. One sign of the Me Generation's ascendancy was the vogue for, and faith in, psychiatry as panacea. Through its many flavors and techniques, this alluring semi-science promised the self-grokking and inner peace that had become elusive amidst the brittle secularism of the age and the unfettering of the greed that we could already smell in the air.

A deeply psychological play like Agnes of God might not have been plotted to depend on a technique like hypnotism if it were written today. And Dr. Martha Livingston, the court-appointed psychiatrist tasked with determining a young, visionary nun's competency to stand trial for the murder of her newborn, might not have been written as so indulgently self-analytical.

Despite that dated aspect, the play's overall dramatic soundness makes it still effective, and its theme – faith and unbelief, the scientific vs. the miraculous – resonates strongly in this new century of militant Islam and Dawkinsian atheism. Center Stage Community Playhouse's new revival, staged in a spacious converted chapel, does well by John Pielmeier's claustrophobic, but intermittently funny, three-character play. 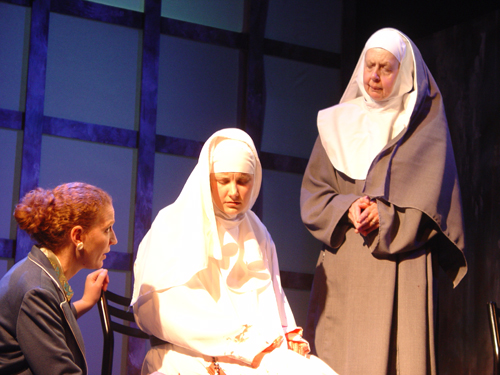 The story was made known to a wider audience through Norman Jewison's 1985 film version that starred Jane Fonda, Meg Tilly, and, in the meaty role of Mother Miriam Ruth, Anne Bancroft. Bancroft's seething performance, and before that, Geraldine Page's famous, Tony-nominated portrayal on Broadway, might seem tough to live up to, but the relatively unknown Pauline Walsh has a grand time with the part here, speedily banishing any famous ghosts.

The play's outward mysteries are straightforward: who fathered Sister Agnes's baby, and who killed it? But the unfolding of the old nun's own character forms a powerful parallel to the whodunit, and Walsh plays that power like a rope through her fingers, easily untangling the script's knottiness, with the able help of Ruth Chiamulera as Dr. Livingston. If, in the end, Mother Miriam is rather more, and rather less, than the kindly, worldly old nun she first appeared to be, we are grateful to have been so artfully misled.

The role of the "holy innocent" Sister Agnes is full of gristle too, and Keri Seymour bites bravely into it. Frightened out of her mind, hemmed in by the demons of her childhood, shifting from denial to release, from small and meek to towering and angry and back, Sister Agnes is simultaneously an ancient archetype – the visionary, stigmatic ascetic – and a creature of her psychologically aware times. Covered in a flowing white habit, with (like Mother Miriam) only the center of her face showing, she shocks and smolders, as does this production, thoughtfully directed by Tal Aviezer. Definitely worth the subway ride to the Bronx.

Performances are Feb. 1, 2, 3, 8, 9, and 10 at Foster Hall, 2474 Westchester Ave. in the Bronx (Westchester Square stop on the 6 train). Fridays and Saturdays at 8 PM, Sunday matinees at 2. General admission $18, Senior and Student $15. $2 discount on General Admission tickets for Bronx Cultural Card holders. For reservations call (718) 823-6434 or email [email protected]  Caution: cigarettes are smoked on stage.

So how did I get here? I mean wind up as a Jewish Cantor? A …