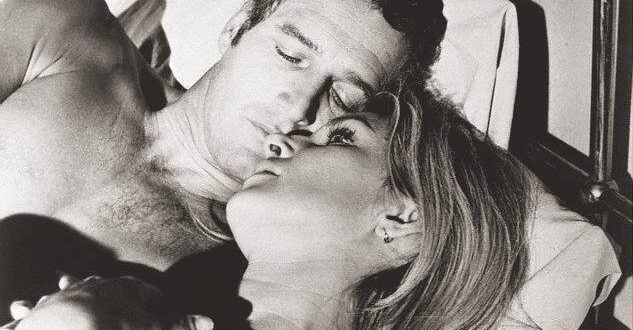 Elena Gonzalvo 3 weeks ago Comments Off on The Last Movie Stars: A Homage to Paul Newman and Joanne Woodward 172 Views

This summer HBO Max broadcasted The Last Movie Stars, a six-part documentary series about Paul Newman and Joanne Woodward, disclosing for the first time several transcripts of interviews with Newman and Woodward by screenwriter Stewart Stern (Rebel Without a Cause, and Rachel, Rachel). Although Newman destroyed most of the recording tapes, Ethan Hawke gathered an insightful collage of narrative fragments that shed new light on the legendary couple’s story. Some revelations—like their clashes of egos and Newman’s heavy drinking—show us how their marriage was a story of intense romance, intense conflict, and serene strength. In 1953, in a Broadway production of Picnic, Newman and Woodward fell in love with each other, despite Newman being married to Jackie Witte, mother of his first three kids.

Painfully honest, Woodward admitted to Stern: “I’m not a natural mother. I hope the children understand that though each and every one of them were adored, if I had it to do all over again, I might not have had children. Actors don’t make good parents.” Newman was convinced that Woodward was the catalyst for “giving birth to a sexual being,” since their association gave Paul Newman more confidence as an actor and sex-symbol: “Newman as sexual object was invented.” After Newman’s divorce from his first wife, he married Woodward in 1958, and they were together until his death in 2008. Woodward, now 92, has retreated from the public eye due to Alzheimer’s.

A new book featuring these lost transcripts from Newman and Woodward will be published by Knopf on October 18, 2022: Paul Newman: The Extraordinary Life of an Ordinary Man—and two daughters of the celebrated couple (Melissa and Clea Newman) have contributed to the project with a foreword and an afterword, respectively. This memoir will offer us new perspectives of Newman and Woodward, both beloved movie stars who also became philanthropic powerhouses. Edited by David Rosenthal, this book promises to focus on Newman’s stream of thought about his career and relationship with Woodward—his dependence on her, the way she shaped him intellectually, emotionally and sexually.

In Lust With Him

When Woodward was asked by Stern about the key of her successful pairing with Newman, she tried to convey their dual complexity: “I was enamored of him. I was in lust with him. I think we saw two entirely different images of each other. He thought I was very much in control, crazed but creative; none of which I felt about myself. And I thought of him as being heroic, smart, intelligent and handsome. None of which he thought about himself.”

The Last Movie Stars is also a quite comprehensive study of Newman and Woodward’s film trajectory, and how some real life experiences oddly were conflated with their film versions, like in The Long Hot Summer, A New Kind of Love, Cool Hand Luke, Winning, or Mr. & Mrs. Bridge. As Newman said once: “Acting is a question of absorbing other people’s personalities and adding some of your own experience. Joanne believes my character in a film we did together, Mr. and Mrs. Bridge comes closest to who I really am. I personally don’t think there’s one character who comes close.”

Shawn Levy (author of a previous biography in 2009: Paul Newman: A Life) wrote: “Paul Newman had an intense discipline that demanded he earned, through sheer perseverance, a place alongside the Method gods Marlon Brando, Montgomery Clift, and James Dean. He was ultimately the one true superstar to emerge from the original Actors Studio generation, the most popular Stanislavskian actor in American screen history.”

Nominated eight times for Academy Awards, Newman won only once, for “The Color of Money” (1986), in which he reprised his iconic role of “Fast” Eddie Felson—in Robert Rossen’s “The Hustler” (1961). Rossen explained: “Fast Eddie wants to become a great pool player, but the film is really about the obstacles he encounters in attempting to fulfill himself as a human being. Eddie needs to win before everything else; that is his tragedy.”

In 1966, Cahiers du Cinéma’s film critic Jacques Bontemps wrote about The Hustler: “in a universe dulled with leveling, the one who wins is not the one who concerns himself with the beauty of the gesture, but he for whom everything poses itself in terms of efficacy of return. Compromise and resignation are required.” As Claude Ollier had perceptively written, what gives The Hustler its staying power is that “one has the constant impression that a sense of indecision hovers permanently, and the final explanations are not enough to dispel it.” Pauline Kael noted: “George C. Scott in The Hustler suggests a personification of the power of money. And there’s a tortured, crippled girl (Piper Laurie) who speaks the truth: she’s a female practitioner of the Socratic method who is continually drinking her hemlock.” Roger Ebert wrote that The Hustler “is one of the few American movies in which the hero wins by surrendering, by accepting reality instead of his dreams.”

Alan Casty analyzes The Hustler in Robert Rossen: The Films and Politics of a Blacklisted Idealist (2013): “In Rossen’s parable of the artist in Hollywood, all are hustlers. The more one hustles and strives, the more he betrays his ideals and dreams. And the more he strives, the more he ends up placing himself in the hands of the moguls whose drive for power rises from an ego that is paradoxically both strong and uncertain. Pool is Eddie’s craft, what he does best; yet, until the very last game, it reveals the most destructive drives within him. His redemption comes not only from what he has won for Sarah, but what he is willing to lose for her. He gives up all that he has left to love. He has paid his debt—by winning and losing.”

The Most Significant Film

During the 1970s, Paul Newman called WUSA (1970): “the most significant film I’ve ever made and the best.” Newman had fought Paramount Pictures, accusing the studio’s executives of cowardice: “There aren’t many smart people who have power,” he declared to the studio’s vice president Peter Bart, “and you have to use your power to advance truth. What’s money and power worth if you don’t do that?” In WUSA, Paul Newman plays Rheinhardt, an alcoholic failed musician who is hired by a right-wing station. Rheinhardt finds his ideological detachment challenged by his lover Geraldine (Joanne Woodward), and by Rainey (Anthony Perkins) who is an idealist fighting against WUSA’s sinister agenda.

Based on Robert Stone’s novel A Hall of Mirrors (1967), WUSA was the biggest flop of Newman and Woodward’s careers. The film was partially censored by the studio, due to its stance against the Vietnam War. In Conversations with American Writers (1986) by Charles Ruas, Robert Stone proffers in Rheinhardt only a moribund perversion of the American myths of individualism and innocence, co-opted by corrupt institutional forces. Stone explains to Ruas: “The affectless person fascinates me. Because of the general rootlessness and transience of American life, that character is, to some degree, celebrated. Not only have we the Frontiersman and the Puritan and the Outlaw, but we have the Sociopath as a major cultural type, and there is a certain reverence for him in American society. I think what I was trying to do in A Hall of Mirrors was to recognize the importance of the emotionally crippled individual in American life.”

Unsure if he must take a stand, Rheinhardt is a drifter with an astonishing capacity for self-delusion. “Rheinhardt represents a kind of dead-end version of American freedom,” Ruas writes. “Rheinhardt may be rootless, affectless, emotionally crippled, but his alcoholism exposes the remnants in him of conventional compassion. He masks what feelings he still has and cultivates coldness as an adaptive strategy. Michael Tager astutely remarks of Rheinhardt that his name sounds like rind-heart, suggesting someone who consciously deadens his emotions to reduce his vulnerability. Responding to news of his lover Geraldine’s suicide, Rheinhardt is moved in spite of himself.”

Ruas adds: “The [right-wing] Restoration Rally thus functions not as a means of revivifying traditional American ideals, but of accelerating a serial process of simulation in which technology facilitates the absorption of the individual into the mass. Preparing himself to speak before the crowd, Rheinhardt momentarily imagines himself conducting an orchestra that might produce redemptive art. Stone elaborates on the impossibility of regenerative violence. Rheinhardt’s peculiar boast is that he can adapt to the cultural coldness. The rhetoric of natural evolution is splendidly ironic for its simulative forms, rather than authentic human ones.”

As an epilogue that we don’t see in WUSA, in the last pages of A Hall of Mirrors Reinhardt’s conscience arises due to having his heart broken over Geraldine’s death. This twist might indicate that Reinhardt will end up losing his self-defense mechanism and, like Rainey and Geraldine, he’ll perish as another victim of an irredeemable system. His affection for Geraldine allows Reinhardt to reclaim back his sense of humanity.

Joy of My Life

The Hustler and WUSA share the anti-hero/misfit and the fallen woman archetypes, besides the romantic notion of being faithful to your principles. In real life, on their fiftieth wedding anniversary, Newman asserted: “Joanne, being married to you has been the joy of my life.” As well as in those films, Paul Newman had found a saviour in his wife and muse, Joanne Woodward.

Reflecting on his tumultuous life and career, Paul Newman said: “I’d like to be remembered as a guy who tried to be a part of his times, tried to help people communicate with one another, tried to find some decency in his own life, and tried to extend himself as a human being.” In the coda of The Last Movie Stars, Tennessee Williams (author of Sweet Bird of Youth, The Glass Menagerie, Cat on a Hot Tin Roof) is quoted: “The world is violent and mercurial. It will have its way with you. We are saved only by love. We live in a perpetually burning building, and what we must save from it, all the time, is love.”

I'm Elena Gonzalvo, a Spanish/French blogger and film/book critic. My favourite genre is Film Noir. My blogsite is Weirdland: http://jake-weird.blogspot.com