It is ironic but somehow fitting that St. Patrick is the patron saint of Ireland, synonymous with all things Irish, when in fact he wasn’t even Irish. Patrick was born around A.D. 390 in Roman Britain to a wealthy family and led a life of casual privilege until he was kidnapped by raiders at the age of 16 and spirited away to Ireland, where he spent more than six windswept, chilly years as a slave tending sheep in the vicinity of Killala.

St. Patrick – The Man Behind Worldwide Celebration of Irishness

Eric Olsen March 17, 2016 Comments Off on St. Patrick – The Man Behind Worldwide Celebration of Irishness 220 Views

St. Patrick’s Day is the most lighthearted, carefree holiday on the calendar, at least in America. A party for party’s sake, bathed in green, awash in alcohol, and celebrated to the tune of spirited and sentimental Irish music, St. Patrick’s Day is the raucous celebration of the very idea of Irishness for the Irish, those of Irish descent, and “those who wish they were,” at least for the day. But very few revelers have any real sense of who St. Patrick was or why he is toasted by millions 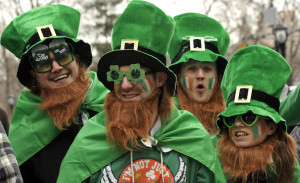 It is ironic but somehow fitting that St. Patrick is the patron saint of Ireland, synonymous with all things Irish, when in fact he wasn’t even Irish. Patrick was born around A.D. 390 in Roman Britain to a wealthy family and led a life of casual privilege until he was kidnapped by raiders at the age of 16 and spirited away to Ireland, where he spent more than six windswept, chilly years as a slave tending sheep in the vicinity of Killala.

There must be something about shepherds and Christianity, for while tending his Irish flocks Patrick had an epiphany and became a deeply religious Christian. In his writings, Patrick claimed that the voice of God then came to him in a dream and told him to escape his captivity and to head to a port where he would find an awaiting ship. He walked 200 miles to the east coast of Ireland, found the ship, and returned home to his family.

Get Thee to Ireland

Back home Patrick had another dream. This time the voice told him to complete his religious studies and to return to Ireland. After 15 years of study, Patrick became a priest and departed for Ireland to shepherd the Christians already there and to evangelize the still-pagan majority. Already conversant with the native language and customs, Patrick took a page from the Christian missionary playbook and worked to integrate Christian meaning into Irish customs and symbols. 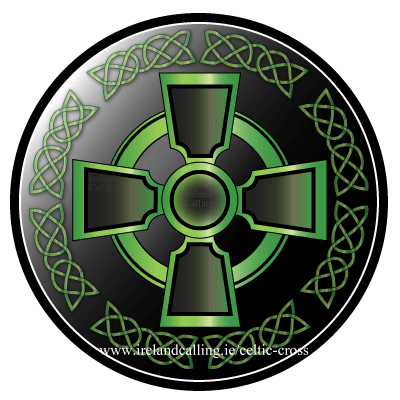 He grafted the powerful pagan Celtic image of a sun onto the Christian cross, creating what is now called the Celtic cross. He co-opted the bonfires of spring in honor of pagan gods toward the reborn Christ at Easter.

Most famously, Patrick used the shamrock, the native Irish three-leafed clover, to illustrate the Holy 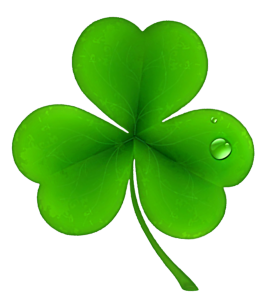 Trinity of Father, Son, and Holy Ghost. This fit in very nicely with the traditional Irish reverence for threes, as symbolized by the trinity knot or the triquetra, standing for past, present, and future woven into an unending pattern. Other key “threes” in Irish tradition include earth, sky, and sea; the ages of man; and phases of the Moon. The shamrock also introduced the color green into the Patrick/Irish mythos, and of course green is the most obvious color of spring.

“Why did it have to be snakes?”

Perhaps the most famous celebrated associated with Patrick in Ireland is his banishment of the snakes, chasing them into the sea after they attacked him during a 40-day fast he was undertaking on top of a hill. The only problem with this myth is that there were no snakes in Ireland, then or now. The icy waters that surround the island are too cold for snakes to make their way from Britain or the continent. The only “snakes” that Patrick drove from Ireland were the symbolic snakes of pre-Christian pagan belief and superstition. 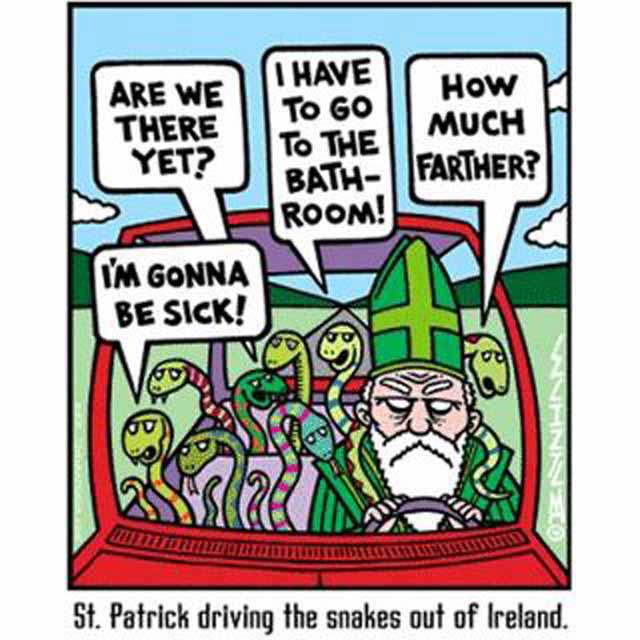 Patrick, who eventually became a bishop, was very successful in converting large numbers of the Irish to Christianity and his sensitivity to Irish customs, language, and traditions generated much good will and greatly smoothed the path. He died on March 17, somewhere between 460 and 493 A.D, and, much like St. Nicholas, his reputation and mythology burgeoned over the centuries. By the seventh century he was already the patron saint of Ireland.

Originally a solemn feast day to commemorate the life of the saint, St. Patrick’s Day picked up its party image in Ireland fairly early. After the church service, celebrants were granted special dispensation to eat meat and drink alcohol, the lone break for such festivities during Lent. While most of the religious connotations associated with the holiday have fallen by the wayside, the party aspect has exploded into the worldwide celebration of Irishness we know and love today in honor of the Irish saint who was Irish only in spirit.

The Macabre Adventures of St. Nicholas

'Single-Handed: The Complete Collection' is great television for those who like their police procedurals a little on the dark side.