I came, I saw, I conquered. Or, it conquered me, because I'm definitely a Talismaniac.

I admit it, I’ve played Talismania for a week and now I am a Talismaniac. Created by PopCap, Talismania is a perfect fit into their puzzle game lineup that includes other favorites such as Bejeweled, Dynomite, and Rocket Mania.

PopCap, while not creating the puzzle game genre, has unquestionably perfected it. As with all of their games, the concept of Talimsania is incredibly simple and yet is incredibly hard to get good at. That, and, like all good games, it’s incredibly addictive. While available in a free version, this review is of the complete, or “Deluxe” version of the game.

The story for the game is that the player needs to help King Midas end his curse and rescue his daughter. This is done, at least nominally, by traveling from town to town and restoring various temples, cottages, ships, and the like. All of the restoring is done in between levels (and requires nothing of the player, save watching the screen). 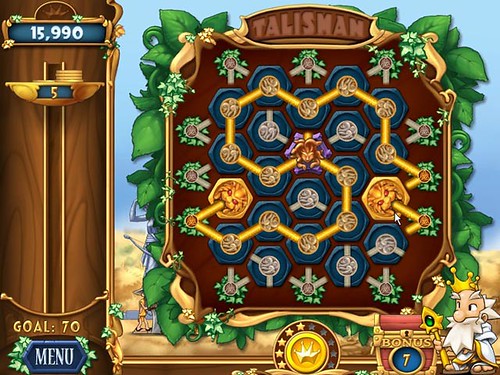 The levels themselves require the player to turn pieces on a board so as to connect the light coming out of two talismans of the same color. In between the hexagonal talismans are similarly shaped tiles through which the light can be moved (each tile has specific in and out points for the lights).

By spinning the tiles around, the light can be forced in different directions so as to create a bridge between the talismans. Once the bridge is created, all the pieces in which the light has traveled are converted to coins. After enough coins have been built up the level is over and Midas helps restore another point of the city he’s currently in. 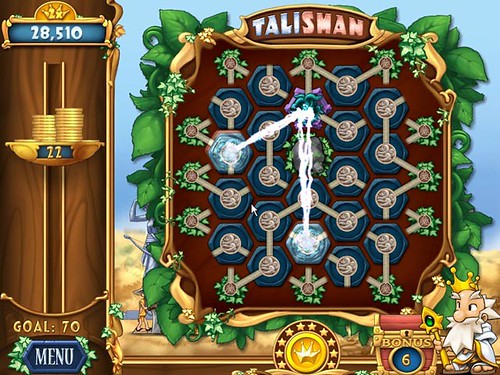 Of course, it’s not quite that easy. Depending on the length of chain the player builds, and how quickly it is built, the next set of talismans that appear on the screen will be either bronze, silver, or gold. The more gold ones obtained, the more points the player gets, and it also allows for the portion of the city constructed at the end of the level to be of greater value (bronze, silver, or gold) as well.

On top of that, there are various enemy and bonus pieces on the board too. Some of them convert regular tiles into special ones that will not change over to coins once destroyed. Other pieces freeze the player’s end-level bonus or give extra coins, etc.

When first played, only “Story” mode is accessible. This is the basic game mode, with untimed play, in which the player gets to see the story associated with the game between levels. Just as I was beginning to think the whole game was a little too easy, I finished the levels at the second location, and unlocked “Hero” mode. In this mode, the levels are timed, which makes it all infinitely more difficult.

Game play is self explanatory, and little informative “hints” appear throughout the early levels in order to delve more deeply into the nuances of the bonus and enemy pieces as well as chain length, talisman colors, and other finer points. 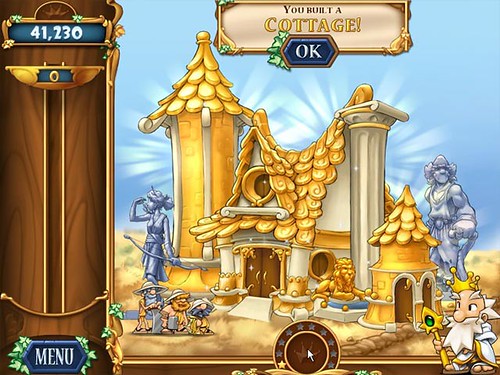 One of the best features of the game is that it has the ability to save, so that it can played in short stints as quick breaks or in a longer session. There are hours of game play included, and without the save feature the end could not be reached.

It’s a simple, fun, addictive game that requires hours to master and frankly it’s time that I start playing again.