The Who's Live At Hull 1970 is a worthy, if non-essential, companion piece to the greatest live album ever made.

Between Pete Townshend’s book, the upcoming Quadrophenia tour, and a flood of reissues and otherwise newly unearthed material this year, 2012 has become something of a goldmine for fans of The Who. 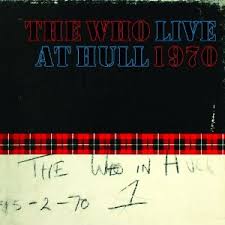 Live At Hull 1970 joins a long list of new Who releases that includes the recent Live In Texas ’75 DVD and an upcoming boxed set of all the band’s studio albums.

But this release stands apart from the others – not only because it captures The Who during what most acknowledge was their peak period as a live concert act – but also because it was recorded the night after the legendary Live At Leeds show.

Regarded by many as the greatest live rock and roll album ever made, The Who Live At Leeds is, if nothing else, going to be a tough act to follow, even by the same band who created it. Live At Hull 1970 is a worthy, if non-essential, companion piece to that classic.

As the story goes, both performances were recorded for the planned live album, but the Hull tapes were either lost or deemed unworthy of release. There are even rumors that some of John Entwistle’s bass parts heard here, actually came from the Live At Leeds recording, and were duplicated in later studio overdubs for this album.

The main thing you notice about Live At Hull 1970 though – particularly if you own the deluxe version of Live At Leeds released decades after the original single disc album – is that the setlists from the two performances are nearly identical. The biggest difference on Hull is the omission of “Magic Bus,” which was a standout on the original Live At Leeds album. That one is sorely missed on Live At Hull 1970.

But there are other noticeable differences between the two. The version of “Shakin’ All Over” here includes parts of “Spoonful” in the middle, which are missing from the Leeds recording. The blazing, fifteen minute version of “My Generation” heard here is also – incredibly – even more ferociously played than the one heard on Leeds. Townshend simply takes his slash and burn power chording to another level here, and Entwistle and Keith Moon don’t miss a single beat in matching the ensuing pyro note for chaotic note.

Like the deluxe version of Live At Leeds, the second disc here is devoted entirely to a complete run-through of the rock opera Tommy. As was the case there, Tommy takes on a much edgier, rock sound live than on the studio album. Keith Moon is also nothing short of astonishing here. On the extended instrumental parts like “Sparks” and the “Overture,” he pounds the crap out of his drums like a wildman.

That said, making comparisons between these two performances from back-to-back nights, though perhaps a bit unfair, is also inevitable. Mostly, they are so slight as to be almost non-existent. But hardcore Who nerds will certainly notice the differences in recording quality. Those weird little clicks you hear between some of the tracks for one thing. Those are actually the sound of Keith Moon’s sticks hitting the rims of his drums.

If The Who Live At Leeds is considered by many to be the greatest live rock and roll record of all time, the performance here is so close that you could almost mount a decent argument for Live At Hull 1970 as a strong contender for the number two spot. That’s how close these two recordings sound.

Some fans will also argue that Live At Hull is the better performance, due to its rarer, more obscure status compared to the much more celebrated Live At Leeds. But it’s basically the same show.

A one-of-a-kind 1967 Who album reappears in an excellent five-CD edition. Also, two singer/songwriters who deserve a listen.