Heavy on the funky-jazz guitar, it's layered and intricate.

The Rhythm Syndicate is the self-titled debut CD from this Cleveland, Ohio area band with a long-standing reputation for their distinct brand of the blues at popular Northeast Ohio clubs such as Fat Fish Blue, The Savannah, and Northside.

The band is comprised of Pat Sandy, lead vocalist, guitar player, and chief songwriter for the group; Kevin Dyckes, tenor sax and bass guitar; Angelo Ciu, lead guitar; John Yencha, drums; and Doug Hopkins on tenor sax and clarinet. Even though this is their first release, the band has been performing together for more than ten years. The result is a tight sound and a chemistry that is undeniable. Contained herein are twelve original songs, with an innovative style and approach, delivered with a unity and grace that can only come with experience and an intimate knowledge of those you play with. 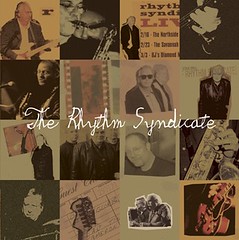 The album opens with a very traditional sounding instrumental called "Barfly Blues." It's laid back and well executed but a bit mellow for a kick-off track. It sets a tone for something completely different than what follows. The second track, "Too Much Information," which is probably my favorite on the entire CD, kicks it into high gear. It's full of attitude and is simply fun, as well as a better indication of the overall tone of the CD. That's not to say "Barfly Blues" is disappointing or even lackluster, it just may have been better placed near the end of the album as a wind-down track.

"Crawdaddy Walk" also stands out and showcases Sandy's vocal talents as he effortlessly delivers on this one. Maybe not unique in topic – the song pays homage to a woman – it is distinct in its approach and style while staying true to genre and form. And what exactly is that form? At its heart it's the blues, but it's been seasoned with a bit of jazz, a touch of swing, and a whole lot of soul. The years of performing in front of a crowd come out loud and clear as they have a fine tuned rhythm that calls you to the dance floor.

Another highlight of the album is the incredible and emotive tenor sax work on "Sunny Day." The track is heavy on style and the solos shine like a star between the catchy vocals as they accentuate the guitars and drums. The song, like most of the CD is upbeat and fun. As you might expect, "Funk-o-matic" is another song that highlights the sax as it was co-written by Kevin Dyckes and Pat Sandy. A four and a half minute instrumental, it certainly lives up to its title. Heavy on the funky-jazz guitar, it's a layered and intricate tune.

All in all The Rhythm Syndicate is an album that would be enjoyed by anyone who appreciates the above mentioned genres. It's true to form, while still being contemporary and fun. Information on the Rhythm Syndicate can be found on their official website including news, concert dates, and a photo gallery. If you find yourself in Northeast Ohio in the coming months, check out The Rhythm Syndicate for yourself at the following locations: