Refreshing alternative rock that reminds us of a time before the rise of angst-ridden boy bands with ironic names.

The Oohlas are former Everclear drummer Greg Eklund on lead guitar and vocals, his brother Mark on bass and vocals, and Ollie Stone on guitar and vocals. They have recently added Luke Adams on drums for live performances, but Greg played the drums for Best Stop Pop. The volume of guitars and vocals cause the waves of sound to crash against the ears in a way that only mid-90s alternative rock can do. The Oohlas present a retro sound with a refreshingly modern approach that reminds us of a time before the rise of angst-ridden boy bands with ironic names.

The first track begins with a slightly industrial wail and clank bleeding into guitars and vocals from one of the Eklunds. It is an odd choice to put "Gone" as the lead song for an album that is essentially introducing the band to listeners outside of their Los Angeles area fan base. The theme of the song is that everyone the writer knows has left him (or her – I was not provided the liner notes for this review), and he doesn't care. It is sung with emo-ish tenor, and could be Greg Eklund's anthem of "I'm not in Everclear anymore and I don't miss it. Really." Or it could be about something else entirely. Since it is the lead track, one is left to assume that it is meant as a former band/friend post-breakup song.

By alternating tracks between male and female lead vocals, the Oohlas have kept the sound fresh on this album. This is handy since most of the lyrical content appears to consist of stream-of-consciousness or journal content. Aside from the occasional peculiar or amusing line, nothing really reaches out and grabs the listener by the collar. The music is undeniably engaging, but the lyrics are disappointingly not at the same level.

"Across the Stars In Blue" has one of the most entertaining yet odd lyric on Best Stop Pop: "Some pretty titty shaving kitty's gonna charm the world, but I'm just charming the love of my girl." It is possible that I have misheard the lyric, but it is such an amusing mental image that I hope I am right. The line leaves me with an image of a fluffy house cat holding a razor and chasing after a scantily clad woman with a blue starfield in the background. 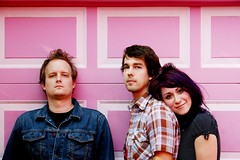 The song with the best hook is "Small Parts." Despite the happy-go-lucky feel of the music, the lyrics paint a picture of a person in the midst of a mental breakdown. Still, one cannot help but sing or hum along when the chorus comes around.

The whole album is very radio friendly, and I suspect that the band will have no trouble breaking out into the national mainstream music scene where songwriting is not as important as a tight sound and attractive band members. In that, the Oohlas have already succeeded.