Versatility. It comes in handy in many walks of life, but may be most essential of all in the performing arts.

It's easy to laugh at actors straining to become singers and models desperately trying to become actresses. But they do such things not for our ironic amusement, and not (though it often seems this way) out of pure vanity, but because they want lasting careers in a field where popularity is fleeting. It's not easy.

For the independent musician, versatility is just as important. Burning cooler, he's less likely to flame out quickly, but he pays for his store of potential energy by not making much money. Versatility for him means being able to front his own band today and work as a sideman tomorrow; to perform solo, to write, to play covers or traditional music, and to play multiple instruments – all while self-marketing and hustling. It's not easy.

Yet a performer, whether star or journeyman, needs to make it look easy. The singer, songwriter and virtuoso string player Fionn Ò Lochlainn and his acoustic ensemble did just that last night at Joe's Pub, celebrating the release of Fionn's first solo CD, Spawn of the Beast. A fine artist on guitar, mandolin, piano and vocals, and with a batch of powerful original songs, he will be touring with Billy Bragg in the coming year. Right now, settled in New York, he's promoting his new disc with a January residency at Rockwood Music Hall, which in its brief existence has become New York musicians' favorite small room to play. 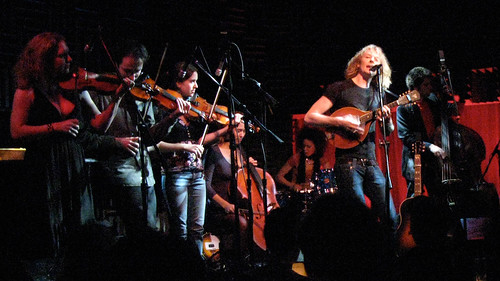 For the CD release party, a bigger venue was needed, hence last night's packed show at Joe's Pub. Fionn is one of those wholegrain performers whose work and presence can't be separated. Celtic soul, singer-songwriter acoustica, and Frampton-esque rock star magnetism fuse in his stage persona, a mix that's surprisingly well captured on the CD.

In concert, Fionn's piping rock tenor occasionally plays second fiddle (so to speak) to his zooming handiwork on guitar and mandolin when the latter requires him to look down and away from the microphone. But his generosity as a performer makes you root for him no matter what. Able to masterfully steer a tight band that, amazingly, has only rehearsed once, while at the same time pulling in an audience much of which doesn't know his music, Fionn makes a virtue of multitasking.

Happily, Fionn's songwriting and interpretive ability can keep up with his devilish musicianship. The CD opens with three of his best originals: the dramatic "Walk My Way," the lovely "Waterside," and the insistent "Racing Against the Time," the last of which in concert became a mesmerizing, accelerating train ride. Drummer Cindy Blackman (of Lenny Kravitz fame) and bassist Orlando Le Fleming (Jane Monheit) propelled the more rhythmic songs, while a powerful string quartet that included fiery cellist Natalie Haas and her violinist sister Brittany (who played on Danny Barnes's Get Myself Together CD, which I reviewed last year here) provided added shots of soulful, sinewy musicality.

Fionn played a couple of songs by himself, including an a capella version of Black Sabbath's "War Pigs" which is becoming a signature tune for him. Other non-originals included a delicate version of Stevie Wonder's "Big Brother" and the exquisite "Green of the Grass," written by Fionn's father, Ruan Ò Lochlainn (who worked with Roxy Music, Ronnie Lane, and Jethro Tull among others). Fionn's large talent enables him to make a big, rock-influenced sound and an equally substantial artistic statement using only traditional, acoustic instruments and keening, crystalline vocals. His original music leaps off the stage, and the CD reflects that energy as well as a studio recording can be expected to. He plays traditional Irish music around town as well, and plans to host a variety of guests at the upcoming Rockwood residency, Thursdays in January.

Song samples are available here; the CD is available at shows, and online here.