Hit the Lights video comes out in advance of a new album that mixes punk spirit with pop substance.

“Earthquake,” the first video from the pop-punk rockers Hit The Lights’ upcoming album Invicta, has hit the net. Shot at a variety of stops on the band’s recent fall tour, the tune tones down the grit and fires up the pop. It is about as accessible as you can get while keeping your punk credentials, and it is a fairly accurate representation of the kind of music you’ll find on the new album. There are songs that lean further to punk, and songs that lean more to pop, but nothing that really goes all the way in either direction. Omar Zehery, Hit the Lights’ guitarist, explains, “The songs definitely have pop elements to them but we made a conscious effort to make sure they weren’t too polished either.” Front man Nick Thompson adds, “We weren’t trying to shy away from pop-punk, we just tried to be ourselves and write honest music.” What they produced is a menu of new material that is sure to please old fans and likely to produce new ones. If it doesn’t quite reach the grandiose goal Thompson says the band was aiming for—“the goal for this record was to be epic”—it does manage its lesser aims. “We just wanted everything to sound powerful and for it to be the type of album you can listen to over and over and hear different things.”

Album opener “Invincible” uses the band getting psyched to take the stage as a metaphor for attempting to achieve great things. It is the kind of anthem sure to get audiences on their feet at the beginning of any concert. “Tonight we jump from greater heights; we’re invincible, and it starts/Take the stage, feel the blood rush through your veins, take a chance.” “Oh My God,” which closes the album, is about as close to classic punk as the band delivers. “Oh my god,” the song ends, “I’ve found Hell in you.” Other punk-leaning tracks include “Gravity,” “Take Control,” and “Float Through Me,” which opens with some interesting guitar work and percussion.

Prettier—and I use the word advisedly—songs like “So Guilty,” “Get To You,” “Faster Now,” and “Should’ve Known” would have a hard time passing as punk. Other than a power passage or two, they could well be the stuff of American Idol pop/rock. Not that there’s anything wrong with that; they’re simply a far cry from the punk aesthetic. 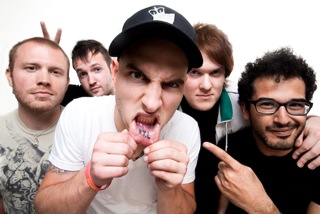 If you’re looking for Dead Kennedys, you might want to look elsewhere. But if you like your pop/rock with an edge, or if the Sex Pistols take it a bit too far for your taste, you may want to give this new Hit the Lights album a listen. Sample the “Earthquake” video to get a good idea of what the rest of Invicta is like.

Listen to 'Fuck These Fuckin' Fascists' by The Muslims and feel hope for the future; great music and great ideas will always make a better world.