German jazz bassist releases an eclectic disc and a half. 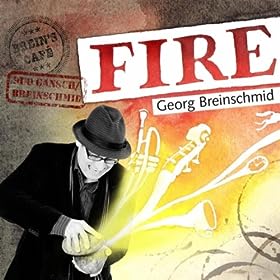 It’s hard to know what to make of Georg Breinschmid and his new album Fire.

Although he began as a classical double bass player and at one point played for the prestigious Vienna Philharmonic, his publicity indicates he has for many years devoted himself to jazz. If you check out his work on iTunes, you’ll discover classical work and jazz, but you’ll also find his 2008 album Wien Bleibt Krk labeled world music and his 2010 Brien’s World identified as singer/songwriter. Then, if you plug in this newest album, good old iTunes has decided Fire is country and folk.

The trouble is that once you listen to the album, you will more than likely have no better a pigeonhole to shove Breinschmid in than iTunes. There are 14 tracks on the album, plus a bonus disc with four additional “rarities,” and the only thing all 18 tracks have in common is nothing. When you get right down to it, iTunes is right. If you want a category, try all of the above and add a few more as well.

Not only does Fire defy generic classification, it mixes live performances with studio recordings. It mixes tracks by two different combos: Brein’s Café, a trio which includes Frantisek Janoska on piano and violinist Roman Janoska, and a duo with trumpeter, vocalist and all around partner in crime, Thomas Gansch. It mixes original vocals and instrumentals. At times the music is very serious, at times playful, and at times downright absurdist. When you think you see what he’s doing, he does something else. In some sense, that is what jazz is all about—doing something that’s different from what’s been done before. So in the end, if you have to put him somewhere (and you really don’t), jazz is as good a place as any.

That said, the man and his cohorts can play. Brein’s Café’s live take on “Suite 7,” which runs about seven-and-a-half minutes long, is filled with virtuoso solo work by each of the musicians, and there’s even a little scat singing. The duo’s “jaBistdudenndeppat,” a title which the notes explain refers to the various time signatures among other things in Viennese dialect, offers some free form trumpet jamming from Gansch and even a shout out to Beethoven with a little bit of the “Ode to Joy,” albeit with tongue planted firmly in cheek.

You can get a stylish ballad like “Spring” played with elegance and a raucous polka like the album’s opener, “Schnörtzenbrekker.” You can get some smooth Latin jazz in “Little Samba,” and a little Hungarian folk music in “Nota/Csárdás.”

“Jazz-Gstanzln” is a long, humorous seemingly improvised vocal, which gets plenty of laughs from the live audience, and probably deservedly so. But for those of us who don’t speak German, it is a bit annoying. It is translated in part in the notes, but it is also explained that the live version “contains a variety of mistakes,” so what we are reading is unfortunately not what they’re hearing. What they gain in spontaneity from the live performance, warts and all is fine, but it would be in on the jokes.

The duo and the trio come together for the comically allusive “Musette pour Elisabeth,” with its parody of Viennese operetta. Indeed, musical allusions and echoes run throughout the album—whether Beethoven or “Dark Town Strutter’s Ball,” you’ll recognize a snippet here and a snippet there. You may not always be able to identify the music, but if you know, you heard it before. Used sparingly, it’s a nice technique.

The two ensembles also get together on the bonus disc to play the title song of his 2008 album. The disc also has a Café Brien live performance of “Post Bop” recorded at a benefit concert for Japan in 2011, an alternate version of the lengthy narrative vocal “Herbert Schnitzler,” and some outtakes of “Die alte Englemacherin.”

Music Reviews: Jazz and Beyond from Bassists Kyle Eastwood and Georg Breinschmid

Two recent releases from bassist-bandleaders show how jazz continues to thrive in the most disparate of musical "cultures," even with its relatively small, specialized audience.