The sweet, sweet sounds of synthesizers and ethereal pop vocals made even better with witty lyrics.

My love affair with synth pop began some years ago when the general manager at WRFL handed me a few CDs and recommended that I play some tracks off of them on my show. The sweet, sweet sounds of synthesizers and ethereal pop vocals hooked me immediately, and from then on I kept an ear to the airwaves, hoping to find more of the "right stuff" that makes this music so addictive.

Over the past few months, I have discovered that the Boston-based trio Freezepop has the "right stuff." Their new album, Future Future Future Perfect (Cordless/Rykodisc), has been on constant rotation in my "favorites" playlist, to the point that it has woken my muse to write a few pithy words about it.

The album begins with a riff that sounds like it came straight from a video game, which for some, it may seem that it has, since "Less Talk More Rokk" is a bonus track in the Guitar Hero II game.

The distorted synth sounds might make you wonder if your speakers are starting to go, but soon you'll find that this riff is one of several that pass through your mental jukebox whenever you think of the band. Although the songs are varied enough to be distinct, the sound created by the blips, beeps, synthy chords, and drum tracks, combined with vocalist Liz Enthusiasm's deadpan delivery ("let's get this party started, yo"), result in a consistent presentation throughout the album. 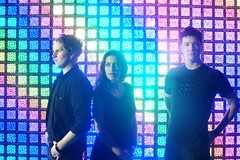 All of the above would be enough to hook me, but Freezepop have gone one step further and written witty, ironic, and real lyrics that break down the fourth wall to connect with the listener on a level unlike most pop music.

From lyrics that embrace the fun that makes pop what it is ("Pop Music Is Not a Crime") to the pain of deep thoughts and feelings that cannot be expressed as well as one would hope ("Thought Balloon"), primary songwriters Kasson Crooker (a.k.a. Duke of Pannekoeken) and Justinne Gamache (a.k.a. Liz Enthusiasm) paint mini scenes or individual portraits with their lyrics that are then animated by the music. Third band member Sean T. Drinkwater (a.k.a. Other Sean T. Drinkwater) is also credited for penning a few of the tongue-in-cheek tunes on Future Future Future Perfect, including "Brainpower," a tribute to bands that must have come up with their names after a few too many cans of PBR.

Fans of synth pop music, if you are not already listening to Freezepop, I command you to go to your nearest music retailer of choice and purchase a copy of Future Future Future Perfect. The combination of synthesizers and wit will be more than you can resist.

Ruiner is a dark, exhilarating game that feels like it's been pulled from legendary author William Gibson's cyperpunk nightmares.