The coolest box-set of the year. 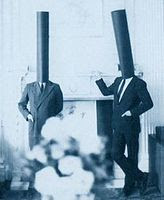 Although Wire are a relatively well known group, whose debut Pink Flag was released in 1977 – Dome remain something of an enigma to many. When Wire went on hiatus in 1980, Bruce Gilbert and Graham Lewis began recording as Dome. Their music was very different from the “art-punk” of Wire, but no less fascinating by any means.

Between 1980 and 1983, Dome released Dome 1, Dome 2, Dome 3, and Will You Speak This Word: Dome 4. When Wire reformed in ‘84, it was Dome’s turn to go on hiatus. Their silence was finally broken in 1998, with the release of Dome 5 -Yclept. The five albums that constitute the Dome legacy may not have set the charts on fire, but they all contain some amazing material.

One big fan is Peter Rehberg, founder of the Editions Mego label. In the five short years of the label’s existence, EM have released an impressive array of new and re-released material – but nothing quite like the Dome 1-4+5 box set. EM are known for issuing what is loosely defined as “electronic” music, but showing a remarkable eye towards symmetry, the Dome set is an old-school LP box. While there is a downloadable version available for those addicted to such nonsense – the big, beautiful vinyl package is the one that counts.

Once upon a time, cover art was a major component of an album’s appeal. In some cases, the artwork was better than the music contained inside. This is certainly not the case with Dome, but the amount of care EM put into the packaging is impressive to say the least. The set includes newly-designed artwork by David Coppenhall, reproductions of the original Atelier Koninck posters which accompanied Dome 1 and Dome 2, an insert with sleeve notes by Howard Jacques and Neil Martinson, as well as unseen photos from the era. An inspired touch is the match-box to put wooden matches in, to shake – along to the tunes of Dome.

Extravagant packaging or not though, we eventually must set it aside and consider the music, and what Gilbert and Lewis put together as Dome is a different animal than Wire to be sure. But for those who enjoyed the artier side of Wire, Dome is a must. I suppose you could call it post-punk, but in all candor – Dome sounds like nobody else I have heard.

“Cancel Your Order” is the opening track of Dome 1 (1980), and it does evoke some of the edginess of early Wire. They very quickly veer off from the familiar with “Cruel When Complete” though. This, and much of the rest of the album, is spookily meditative and suggests some strange things afoot in the studio. And the studio itself functions as the third member of Dome. Both Gilbert and Lewis have mentioned how much time they spent indoors recording. In fact, they seem to have lived there for the better part of a year. Their first three albums were all recorded during a 12-month period, leading one to wonder if they whether they ever ventured outside at all.

From the opening notes of “The Red Tent I,” which leads right into “The Red Tent II,” Dome 2 (1980) feels like a perfect continuation of the first album. Then we come to side two, which is the closest anyone had come to the icy perfection of side two of David Bowie’s Low yet. In fact, I think the Bowie homage was blatant, although Gilbert and Lewis would probably deny it.

Side two of Dome 2 opens with “Ritual View” which is as bright a tune as Dome ever wrote. It is for all intents and purposes “Rebel Rebel” as heard through a distant, extraterrestrial’s AM radio. From there we are plunged into some incredibly clear, and unforgivably cold tones via “Twist Up,” and most especially the 7:20 “Keep It.” If anyone ever wonders why there is a longing for the days of albums being programmed specifically as separate side-long entities, this one should explain it.

Dome 3 (1981) is something else again. By this point, Gilbert and Lewis had well and truly lost it. They don’t even pretend to relate to the outside world anymore. They were like the living embodiment of Eraserhead at this point. The music is mostly atmospheric, with some chanting. An idea of how removed they were from the rest of the world can be provided simply by listing some of the song titles; “Ar-Gu,” “An-An-An-D-D-D,” and “Ur-Ur.” Dome 3 is a masterpiece on a level I cannot even begin to comprehend.

Dome 4 – Will You Speak This Word (1983) upped the stakes considerably. Side one consisted of one song, the 18:15 “To Speak.” This was dangerous, Topographic Oceans territory, but the duo were fully aware of what they were doing. The track is built in sections, the opening of which reminds me of nothing so much as Frank Zappa’s fusion-influenced “Big Swifty” from Waka/Jawaka (1972). From there they utilize a number of various elements, and chant is incorporated to a much larger degree.

These four albums represent a musical vision that is unbelievably powerful, original, and impossible to replicate. I think the titling of the box set reflects Peter Rehberg’s understanding of this. Dome 1-4+5 is a pretty clear indicator that the 1998 Dome 5 – Yclept is a different animal completely.

After Dome 4, Wire reformed – and even had something of a hit in 1988 with “Kidney Bingos.” As far as anyone knew, Dome were done – and had left quite a legacy with those four albums in their wake. Honestly, Wire didn’t have much to say after A Bell Is A Cup, Until It Is Struck (which hosted “Kidney Bingos”) anyway. Anyone remember the god-awful Manscape from 1990?

Prior to this box-set, Yclept was the rarest of the Dome recordings. Mute had kept the first four in and out of print for years, but Dome 5 came and went in a flash. The album’s appearance here marks its first-ever vinyl release as well. The music was very obviously recorded piece-meal over the 14-year gap between Dome 4 and 5.

As one might expect, it is a mixed bag. What sounded fresh and exciting on Wax Trax! in 1988 sounds horribly dated now. Remember a;GRUMH anyone? If not, “Virtual Sweden,” and “Because We Must” will put you right back there. In contrast however, “Making A Meeting,” and “Gebar” sound like classic Dome. There was a trendy drum-machine sound that even Dome fell into for a moment, but by the time of the later recordings, they had gotten their wits back, and had returned to making music of depth and substance that defy the era they were recorded in.

So yes, it is a mixed review for Dome 5, but the music speaks for itself. Dome 1-4 is indescribably essential. Dome 5 is a bit of a bonus. The box set is not exactly budget priced, which is in line with so much of that wonderfully snobbish appeal that albums like these, and those of The Hafler Trio (and others) had back in the day. My guess is that anyone who owns the original 12-inch aluminum film-canister version of PIL’s Metal Box already owns this. But if ya don’t – then click here, because I doubt if you are going to find it at Hot Topic.

This sprawling and colorful indie film chronicles the lives of dozens of 30-somethings as they attend a post-punk festival.