At the risk of being a Johnny-come-lately, I would like to join the chorus in praise of what the South Korean film industry has been achieving in recent years. Films like Bong Joon-ho’s award winning Mother (2009) and Kim Ji-woon’s I Saw the Devil (2010), have received plenty of critical attention, both for their absurdist mash up of violent themes with wacky comic elements and their fundamental technical skill. These are film makers who have studied the kinds of things Hollywood has been doing so successfully for years and found a way to do them one better. They can compete effectively with our local product aesthetically, and they would more than likely find a greater popular audience if it weren’t for issues of language. 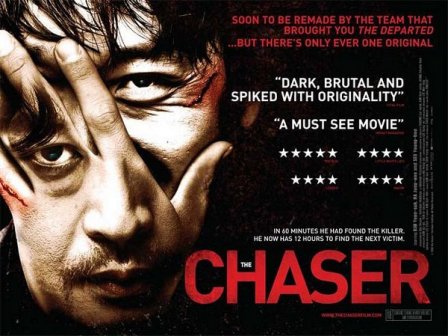 If, on the other hand, you can live with subtitles, there are some mighty impressive films waiting for you. Take for example Na Hong-jin’s 2008 thriller, The Chaser. This is a film which combines equal parts recognizable Hollywood tropes with innovative twists enough to create something both comfortably familiar and entertainingly novel. There are fast paced foot chases, but unlike Daniel Craig speeding after cars on foot in Casino Royale, in The Chaser people actually have to stop to catch their breath.

There is a cute little child who gets attached to the hero, but who doesn’t quite get away unscathed. There are vicious fights which actually leave bloody marks on people. The hero is a cynical ex-cop who has become a pimp, while the villain is a youthful homicidal maniac who seems to go about his business with a childlike innocence. Prostitutes ply their trade but the only nudity is the middle aged paunch of one the customers. This is a film that plays havoc with your expectations.

Like many of the other Korean films, it creates an aesthetic that mixes the horrific with the absurd; that combines Keystone Kops comedy with Chainsaw Massacre gore. It gets you smirking at ridiculous policemen by the dozens falling over each other as they go off in all directions, most of them wrong, until you are suddenly faced with the ominous results of their ineptitude. It doesn’t shy away from bloody violence. The squeamish will clearly need to turn away. It is macabre in the best traditions of the grand guignol.

If the ineptitude of the authorities is also intended as a political critique, as some have argued, it is a critique that may well have some resonance for American audiences as well. Police are not only inept, they are less interested in bringing a serial killer to justice than they are in using his capture to cover up their failure to protect a local politician from an irate protester. They are willing to break all the rules to protect their reputations, but even with violating all sorts of civil rights, they are unable to do their job effectively. And after all, the most effectual character in the film is a pimp. This is a picture of a social order that has gone in the wrong direction.

The Chaser was director Na Hong-jin’s directorial debut. He has since added the critically acclaimed The Yellow Sea to his filmography, a film in which he uses some of the same actors he used in The Chaser. Kim Yoon-seok who stars as the pimp plays a mob boss. Ha Jung-woo, who plays the serial killer, stars in the 2010 film as a cab driver in search of his wife and framed for a murder he didn’t commit.

Blu-ray Review: ‘The Wailing’ – Director Na Hong-jin Puts Us Through the Wringer

Make sure you have enough time on your hands and sit back and enjoy the ride of "The Wailing."