"We as humans are fascinated with being scared," says Ford.

Interview with Teresa Ford, Founder and Editor of Ethereal Tales

Ethereal Tales is a fantasy print publication based in the UK showcasing the fiction and art of talented writers and artists. Though not exclusively focusing on horror, the magazine does consider dark, scary stories. In this interview, founder and editor Teresa Ford talks about the creation of Ethereal Tales, what makes a good story, the state of the horror market, and some of her favorite horror books.

Tell us a bit about Ethereal Tales, Teresa. How did it get started?

It was one of those things where you just start chatting about something and nine times out of ten nothing will come of it, I mentioned to my other half that it might be cool to start a zine. I write and confess that one of the reasons to start it was so that I could 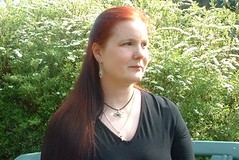 put one of my stories in, as well those of like minded writers. The next day I bought a domain name and created the website, striking whilst the ideal iron was hot as it were, and I also told my family and friends what I was going to do…so that I couldn't back out of it.

My idea was to create something for anyone interested in fantasy fiction, a place were mythical creatures roam and magic still exists. I also want the website to become a community for writers, artists and readers to be able to contact each other… be it to give feedback on the work of others, or collaborate on future projects. Whether my vision will be realised or not I don't know – but I will do my best to make it work.

What type of horror fiction do you consider? Are you open to submissions?

Submissions of all type of fantasy tales are welcome, not just horror. But horror is

welcome, as long as it is not horror for horror's sake. By that I mean give me a story about strange beasties and magical goings-on which just happens to have horrific elements, and I will be happy.

If you could narrow down to three the elements that make a great horror story, what would those be?

Make me like or have sympathy for the main character. If a reader doesn't care about them the horror will be so much less.

Make the character believable. If a reader can find something in your character to relate to then when horrific things happen to that character the reader will feel the shock more.

Give us a twist in the tale, and not just the way horror films do these days (why does the bad guy always get up again no matter how many times you hit/stab/shoot him?). If you can make the reader unsettled by an ending they weren't expecting you have done well in my opinion.

What are the most common flaws you encounter when reading submissions?

I haven't had that masses of submissions so far, but based on those I have received I would say that one problem I have is that stories are sometimes aren't what I would call a short story, they seem as though they are actually parts of a longer story and leave one looking for the next page. Even if a story is short it needs a beginning, middle and end.

Do you think the horror fiction market has declined, reached a plateau, or is still climbing?

I don't feel qualified to answer this question as to whereabouts the market for horror is – all I will say is that I think there will always be a market for horror no matter which type is in vogue at the time. We as humans are fascinated with being scared, and as long as we live in our safe comfortable lives I feel we will always search out books in which to immerse ourselves and experience the thrill of fear.

How hard is it to market and promote a small horror publication like yours when faced with the competition?

I don't consider Ethereal Tales to be a horror zine, it is more of a fantasy fiction publication, but I imagine the situation is the same. As I am still new to all this I can't give you a complete answer to this, but I know it won't be easy to get the zine known to the wider public, but hopefully through my contacts on various forums, MySpace, and word of mouth I will gather enough readers to make it worth continuing to print Ethereal Tales for many, many issues to come. I am not looking to make a fortune from this – it is more about meeting people, making contacts and having fun. I hope that will come across in the contents and feel of the zine and the community I hope will grow around it.

Could you tell us about the advertising and promotional opportunities Ethereal Tales offers authors?

Those who submit stories and artwork to the zine and get their work accepted for publication will be given the chance to have their details and website links added to the contacts page of the website. Through this (and the site forum) I hope that writers, artists and those interested in their work will be able to network. Getting the word out about yourself and your work is always a battle, and I hope that links to Ethereal Tales will help all concerned to do this.

Which authors, in your opinion, will be remembered as the best horror writers of the 20th Century?

Well, as this is purely my opinion I would have to say that I think Stephen King is the best and widest known horror author. Not only has he a vast sum of work to his name, but so many of them have been made into films. Whether you think film adaptations are good or bad, it must be said that film helps to get these stories out to a wider population. Those who might not read the book would watch the film. To me he is a master of horror and has given me many a scary moment in both book and film versions.

I would also like to add that both James Herbert and Poppy Z Brite are also authors I will remember for different reasons.

James Herbert's The Rats was the first horror book I ever read. A grubby copy passed around the playground, with both its sex scenes and horrific descriptions being a focus of our interest, left a lasting impression on me.

Poppy Z Brite was so different to me when I read her books – for its visceral horror and gothic elements I would say she is one to be remembered.

Thank you, Teresa, and good luck with Ethereal Tales!