"It seems to me that the horror writer understands him or herself more intimately than he should."

Interview with Mark LaFlamme, Author of The Pink Room and Vegetation

Mayra Calvani October 14, 2008 Comments Off on Interview with Mark LaFlamme, Author of The Pink Room and Vegetation 118 Views

Mark LaFlamme is an award-winning crime reporter and columnist at the Sun Journal in Lewiston, Maine. His weekly column, Street Talk, where he often compares editors to bats, spiders, extraterrestrial slugs, and "other beings too diabolical to describe," has been named Best in Maine and Best in New England. In 2006, LaFlamme was named Journalist of the Year by the Maine Press Association. In this interview, LaFlamme talks about his books, writing, and what's inside the mind of the horror author, among other things.

When did your fascination with the 'dark side' begin and when did you start writing horror?

What dark side? I'm a perfectly well adjusted young man who dreams of pink ponies and marmalade skies. I whistle while I walk. I stop and sniff flowers at roadside. I retreat only occasionally into the basement to devise new strategies to raise the dead. 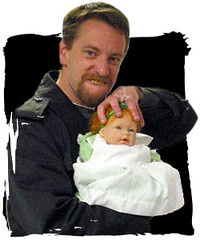 If I have such a gloomy nature, it was certainly born in youth, which was often turbulent and marked by uncertainty. When I was six, I discovered my father dying on a roof, the victim of a brain aneurysm. I don't think I've viewed the end of life quite right since that experience.

What were some of your favorite horror books and/or movies as a teenager?

I started reading Poe when I was preteen. I didn't grasp all of it of course, but I quickly grew fond of his tone. I read a lot of S.E. Hinton, Rumblefish, The Outsiders and such. I discovered Stephen King soon enough. I watched almost exclusively horror movies. Halloween was my first big wow.

Tell us a little about your books, The Pink Room and Vegetation. What was your inspiration for them?

The Pink Room was my second novel and the first that was published. Its beginnings are prosaic at best. I had insomnia. Every night, I tried to play a mental movie in my head to lull me to sleep. I saw a man walking down a dark road in the middle of nowhere. Car pulls up, windows goes down, and a man inside says: "We know you've been inside the house. We want to talk to you about that." I'd been reading a lot about string theory at the time. And I'm always thinking about the irrevocable nature of death. The three concepts got together, had a party and wrote a novel.

Vegetation originated even more mundanely. I was in the backyard having a smoke when a little ivy tickled my ankle in the dark. I jumped and tried to flee and ran face-first into a lilac bush. Plants were everywhere and they were out to get me. I went inside and consoled myself with corn on the cob. It occurred to me that if you offend the kingdom of plants, brother, the whole world really is out to get you.

Having read these novels, I find The Pink Room very strong in atmospheric elements while Vegetation, though also dealing with the supernatural, is more focused on the protagonist's dark psyche. Which novel was more challenging to write?

I identified a great deal with the character Jonathan Cain from The Pink Room. He is a man mourning his dead love and willing to do anything to bring her back. I liked him and I enjoyed advancing his story. In Vegetation, the lead character was Bertram Luce, a pompous and wealthy man. I don't think I'll ever be either of those things and I despised him. Still, because of that, it was fun to set the world of plants after his butt night after night. Vegetation was challenging mostly because I knew nothing of flora going into the story. I had to learn from the ground up, so to speak.

Your latest book, Dirt: An American Campaign is more realistic in that it doesn't have the supernatural elements present in your previous works… though some would argue there's nothing more horrific than a presidential campaign. What compelled you to write this particular story and was it easier to write because of your newspaper reporting background?

My reporting background didn't help at all. I write crime and largely ignore the clamor of politics. That was a real problem when I decided to tackle an American run for the presidency.

I had this half-dream about a man digging up his dead wife in the middle of the night. There was nothing more elaborate about this dream. Just that image: a very determined man with a shovel, digging a square hole to his bride. I liked the image a lot and eventually asked myself what kind of chaos such an act would bring about. At the time, I was reluctantly getting into the Hillary vs. Obama fight and really enjoying the campaign strategies of both. I started studying political strategy, learned a ton, and decided to introduce my grave-robbing protagonist to the concept. The result were some really great characters, some that the reader will love, some that they will loathe. I think that's the success of the book.

Dirt was just released, wasn't it? Was this a promotional move to coincide with the presidential election?

I was taking my sweet time getting Dirt to market. Richard Hoy from Splinter Press took a look at the manuscript and decided immediately what he wanted to do. Let's take the presidential candidate from the novel and start running him a real world campaign, he said. Suddenly, Frank Cotton was everywhere. He has his own website (www.cottonforpresident.com), his own lawn signs, bumper stickers, an entire staff. He even gets into fights with reporters. Sometimes I forget what is real and what is fiction. I should probably worry that with so much uncertainty among voters, Frank Cotton might get elected. If it happens, I'll let Mr. Hoy worry about it.

What do you struggle with the most when writing horror? What comes easier for you?

I don't always want to write horror. The struggle is to avoid elements of it when trying to writing something more mainstream. It's very difficult when you have become accustomed to going dark by default. I try to write a straightforward story about nice people doing nice things and suddenly, someone is dead and being eaten by dogs. Troubling.

What's inside the mind of the horror writer?

Mostly alcohol, I think. It seems to me that the horror writer understands him or herself more intimately than he should. He understands his most base impulses, his weaknesses, the dangerous parts of his insecurities. I really believe that horror writers — or anyone who is driven to just write and write and write — has become so self-aware, his only hope of escaping madness is to bleed it off; to apply all those frailties to characters on a page.

Are you a disciplined writer?

Extremely. Some of that was developed as a reporter, where there are deadlines and no chances to put off writing for a night. I come home at midnight each day and write at least 2,500 words whether I want to or not. Some of my best writing happens when I least want to do it.

Describe a regular day in your writing life.

I'll get up, drink a pot of coffee and write a column or feature story for the paper that's due the following day. Then I'll go into the newsroom and write three or four stories about breaking news. Breaking news is easy and a great way to develop a sharp and concise style. Brevity is, and all that.

I come home late at night, annoy my wife for an hour or so, and come into my writing room. I'll try to read what I wrote the night before and tweak it. Then I go at producing new material, stepping out for a smoke every half hour or so. I keep the TV on while I write but the volume down. I keep the window shades drawn because I don't want to look out there and see a pale face staring in from the dark.

Do you have any favorite horror books or movies you'd like to recommend?

My favorite horror novel is King's Salem's Lot. I just can't help myself. It's so sinister and so beautifully written. Almost poetic, even though necks are being sucked.

What do you do on Halloween? Do you dress up?

I take the entire week off each year and do something crazy. I did Salem, Massachusetts, a few times. It's like Mardi Gras on the big night. I recommend going a week earlier, instead. I've been to Poe's grave a couple Halloweens in a row, Sleepy Hollow, that kind of thing. I write scripts for "The Haunted Forest" in Williston, Vermont, so I've been out there the past few years. It's amazing seeing one of your scripts acted out in the middle of the woods.

My ultimate Halloween destination is Transylvania. In the meantime, I have plans for the Winchester House in San Jose and Gettysburg. I may combine a trip to Gettysburg this year with the trip to Vermont. And oh yes, I dress up. Last year, I was a cannibal clown. The year before that, Andre Linoge from King's "Storm of the Century."

Please tell them I need to pay for an expensive medical procedure and to please buy my books. Or if you want to tell them something truthful, tell them that I would love to hear from anyone who reads my work, whether they love it or hate it. As a journalist, I've always remained extremely approachable, answering every call and every letter I get with enthusiasm. I'd like to be the same as a novelist. Also, I'm very lonely.