About half of Sierra Leone’s population lives in hunger. This West African nation receives aid from Catholic Relief Services (CRS), including school meals funded by the USDA McGovern-Dole program.  Daniel Mumuni,  the director for the McGovern-Dole project for CRS Sierra Leone, updates us on this vital program.

How many children are receiving school meals from CRS in Sierra Leone?
CRS’ Sierra Leone program is targeting about 32,000 students. Additionally, the program is feeding upwards of 900 community teachers, and 500 cooks, who also receive take-home rations as incentive for cooking the meals. We are operating only in Koinadugu District.
Can you describe the impact of the meals in terms of child nutrition and class attendance?

The program is greatly impacting schools and communities. One community opinion leader describes the meals as the “school bell.” Like the school bell, which motivates students to attend, the provision of a healthy lunch has encouraged students to persevere. In fact, the latest national primary school results showed high success rates among students benefiting from the Food for Education program in Mongo Chiefdom. We’ve heard from top-performing students that their success in the classroom is a direct result of the support from McGovern-Dole, and that the meals help them be more focused on their schoolwork. What’s more, since the end of the Ebola crisis, the McGovern-Dole program has contributed to increasing school attendance and retention. We found that from January to December 2017 there was about a 20 % increase in attendance as a result of the McGovern-Dole support.

Are the school meals funded by the United States McGovern-Dole program?

Yes– CRS is the award implementing agency in Sierra Leone.

Is there enough funding to continue the meals the rest of the year?

Yes, there is enough funding for this year to keep our activities going. However we are concerned about the significant cuts in the administration’s FYI8 budget to foreign assistance programs helping the poor, and that would halt funding for McGovern-Dole altogether.

How can someone help CRS in Sierra Leone?
Sierra Leone is one of the most deprived countries in the World, ranking 181 out of 188 countries on the 2016 Human Development Index. Having survived a decade of civil war and the recent Ebola crisis, the country, although resilient, needs support in several sectors, particularly, education, health, and agriculture to recover.  Americans are helping Sierra Leone right now, through tax dollars going towards foreign aid.  Foreign aid only makes up 1% of the budget, but has such a profound effect on countries like Sierra Leone.
CRS continues to seek partnerships from various sources, including the U.S. Government to respond to the urgent needs of the country.  CRS is also implementing a Farmer-to-Farmer/Feed the Future program that seeks to build up their agricultural capacity and introduce new farming techniques, in part by bringing volunteers from U.S. farm communities and elsewhere to Sierra Leone.  This program is also threatened by the budget cuts the Administration has proposed. CRS is proud to be working in partnership with the US government through the McGovern-Dole Food for Education program, and other programs, and looks forward to sustaining the relationship.
(Visited 46 times, 1 visits today) 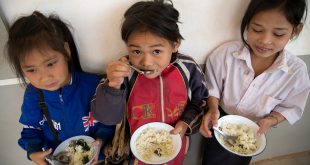 The Trump Administration's 2018 budget proposes eliminating funding for the longstanding McGovern-Dole program that funds school meals in impoverished areas in Laos and other countries.