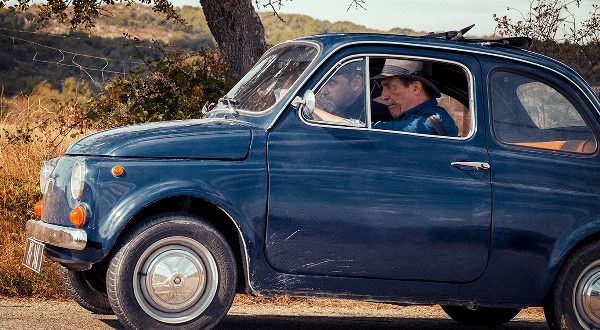 Film Review: ‘The Man in the Hat’ Starring Ciarán Hinds

Lately, actor Ciarán Hinds (Game of Thrones, Justice League) has played villains or adversarial characters in film and television. It’s not very often that he portrays a genuinely nice person, as he does in his latest film, The Man in the Hat. Hinds plays the titular character, who is driving through France in a blue Fiat and having a series of adventures along the way.

The film marks the directorial and screenwriting debut of composer Stephen Warbeck. (See my interview with Warbeck about the film.) His portfolio as a composer has an impressive array of works including plays An Inspector Calls and Translations as well as films Billy Elliott (2000) and Shakespeare in Love (1998), for which he won an Oscar. Longtime friend John-Paul Davidson served as a co-director and co-writer on the film with Warbeck.

The Man in the Hat catches one’s attention right away in that it has much less dialogue than what audiences today may be used to. Hinds has only a couple of words to say in the film. The music, facial expressions, and gestures are all major components in driving the story along and creating some great comedic moments.

Asking yourself, “What’s going on?” was an exercise in curiosity and wonder, rather than of frustration. When other characters speak or a song comes on, it feels like an ideal time to probe the significance of a shared tale. The best stories are told by the hotel proprietor (Brigitte Roüan) and the biker (Maïwenn).

The Man in the Hat is the main character. We never learn his name. When we first meet him, he’s having dinner at a café. A Citroën Dyane pulls up nearby and some men step out to dump something large into the water. The Man in the Hat assumes he wasn’t supposed to see that happen and leaves town in a hurry. The only difficulty is that the five men in the Citroën never seem too far behind!

The Man in the Hat carries a photograph of a woman with him. We never learn of her name or story either. At a bridge, The Man in the Hat drops his hat by accident and has to fetch it down below from the water. He meets a fellow referred to in the credits as The Damp Man (Stephen Dillane), who wears wet clothing and looks incredibly sad. Hearing the squelching sounds in that scene made the encounter feel so awkward as I watched it. The Man in the Hat is primarily concerned with rescuing his hat, but there’s a hint of curiosity in both men’s expressions, as if more should be said.

Mission accomplished, albeit a little wet now, he continues on. Later the two meet again and this time, The Man in the Hat offers Damp Man a ride. I really didn’t know what to make of the Damp Man at first, but he ended up being a very nice character, too. He’s a great example of what a simple act of kindness can do for a person who seems to be in a rut.

The vignettes run a broad range of topics, including watching bulls in a ring, losing a shoe, car trouble, seeing a new crush, and a case of mistaken identity. They were all cute and heartwarming in various ways. I was not expecting the two farmers (Sam Cox and Didier Bourguignon) to diagnose the car trouble and recommend a fix without using words. Rather, they mimicked fast engine sounds and were answered by The Man in the Hat’s more reasonable and cautious engine sounds.

The film has subtitles mostly throughout. However, there are a couple of instances when there aren’t subtitles during songs or dialogue. I could scrape by on what I remembered of my foreign language courses from college, but I think it could be challenging for a fair percentage of viewers here in America.

The camera work highlights the beauty of the hills, curved tiny roads, and the arches of the bridges along the journey. Those shots were incredibly executed by the directors and cinematographer Kanamé Onoyama. In a couple of instances, the crew utilizes red lighting for a night scene and singers are seated in the back of the Fiat, giving it a music video vibe as Hinds mouthes the words of the song. It’s not clear to me what it represents exactly, but it had a cool dream-like quality to it.

The Man in the Hat is an interesting and enjoyable film to watch. While it’s not a silent film, its minimal reliance on dialogue helps the viewer to concentrate on what else is happening in a scene. Some of the best moments in a friendship or an important encounter aren’t necessarily the words, but might arise from a shared look, laughing at ourselves, or a helping hand. The film is a reminder of resilience, personal growth, and friendship, things we need very much in the world today.

Kaleidoscope Entertainment presents The Man in the Hat in selected cinemas from September 18, and it’s available on cigital platforms from October 19, 2020.

Pat Cuadros is a frequent reviewer of all things Washington, D.C. She also covers events in Canada and London. Highlights in her work include articles on Daniel Davis, Fran Drescher, Ian McKellen, Derek Jacobi, and Ndaba Mandela.
@PCuad24

Film Review: The Slow-Burn Creepiness of ‘The Nest’

Film Interview: Stephen Warbeck on ‘The Man in the Hat’

Oscar-winning composer Stephen Warbeck shares how he made his directing and screenwriting debut.