A seal's imagery would be "read" just as though it were text.

We like to think of branding as a modern invention — a part of our sophisticated media age, something you might even have to study to understand — but back in what we used to call the "Dark Ages", they were just as aware of the usefulness of creating images of themselves for others to absorb. The technology to do it was a little more basic. All it required was a suitable carving or cast and a lump of wax, and you could send your self-presentation around the world, or at least around Europe, where its imagery would be "read" just as though it were text.

According to "Good Impressions, Image and Authority in Medieval Seals", a small but nicely formed and informative exhibition now at the British Museum, by about the year 1100 people recognised the authority of seals. So you get a tiny lead pilgrim flask of about 1185 from the shrine of Thomas Beckett at Canterbury. It would have been used for a mix of holy water and a drop of a saint's blood. The back has a seal design showing the saint's murder and in Latin "Thomas is the best doctor of the worthy sick". Simple but clear, and apparently very effective branding.

It wasn't just saints who had their own brand, or even kings. Richard de Lucy, Chief Justiciar to Henry II moaned, "It was not the custom of old for every lesser knight to have a seal, they are proper only for kings and great men."

Gosh, even women got into the branding game. My favourite is definitely that of Elizabeth of Sevorc (right), who is unusually shown on horseback, sitting tall and proud on her fine steed. Unusually, there's no mention of her male relatives in the inscription. She was definitely asserting her status as an important, independent, almost certainly land-holding, woman. 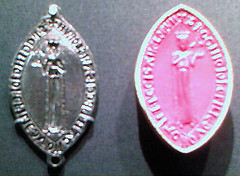 You didn't even have to be that grand to have your own brand. There's a much humbler seal, made of lead rather than the fine gilt bronze of Elizabeth's, of Christine de Waig (left). She's described as "daughter of Roger", and the piece is dated 1200-1300. Even though she's identifying with a man, the exhibition suggests she might have continued to use it, to assert her identity separately, even after she was married.

Of course royalty pulled out all of the stops. One of the most brilliant, shining pieces here is the seal of Isabella of Hainault, wife of Phillip II of france. She died aged 21 in 1190 and her seal was buried with her in Notre Dame, enabling the silver to maintain its brilliant silver lustre. 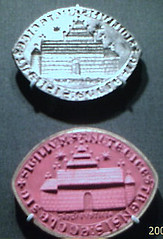 Bishops' seals, however, seldom survive, for they were usually broken when they died as a security measure, much as we cut up a credit card today. They were usually pointed ovals rather than round as easier to fit in a figure. Those of their cathedral seals could, however, be used for hundreds of years. Such institutions could be very conservative about this image they were presenting to the world. A beautifully preserved seal from Chichester Cathedral (right), dated to the late 1100s, shows a building in AngloSaxon style.

For those more "with it" than your average cathedral, there were fashions in seals. The legend found around most seals, explaining its owner and his or her importance, was originally in Latin, but by the 1300s a display of wit, in French or English, took the place of the formal legal formulations.

Not everyone who needed to know about a seal could read, so extra measures were called for. On the seal of Sir Gilbert Wae, Sheriff of Oxford about 1375, an ox peeps out from behind a castle and there is a stretch of water, a ford. Hence: ox-ford… just imagine the peasants cackling over that when his messenger pointed it out. Who needed literacy?

The exhibition continues at the British Museum until May 20. Free.