With True Blood's fifth season now available on Blu-ray, DVD, and download, catching up is easier than ever. 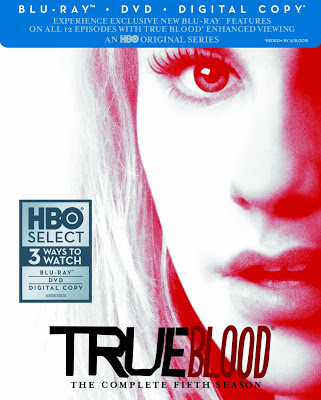 For lovers of HBO’s True Blood, eagerly anticipating the upcoming sixth season, a great way to pass the wait is to relive the most recent batch of episodes. With True Blood: The Complete Fifth Season now available on Blu-ray, DVD, and download, catching up is easier than ever.

Season five, like many recent years of True Blood, is a season of disjointed stories. As the cast has expanded and grown, the tales have stopped lining up with each other so neatly. We have all of our core characters, and they are all served throughout the year. But they don’t necessarily come in contact with one another, nor will their challenges be connected, which is actually quite cool, allowing for a larger picture of the world.

A major arc in season five revolves around Vampire Authority. We are introduced to this group, supposedly the leaders of their species, but not surprisingly, there are fractures among them. Vampires are an unpredictable, dangerous, spirited group, and anytime a number of them come together, they are bound to bicker. Toss in a religious cult which seeks to control the authority, and you’ve got quite a mess.

It’s not surprising that our favorite fangers fall into this mess. Bill (Stephen Moyer) and Eric (Alexander Skarsgard) are both smack in the middle of this, although their loyalties are shifting, and sometimes it’s hard to tell whose side they are on. While some viewers may have liked one of these two men more than the others throughout the run, allegiances may shift based on this season’s story. Matters are only complicated further when Jessica (Deborah Ann Woll) gets involved.

Combined with the followers of Lilith (Jessica Clark), a return by fan-favorite Russell Edgington (Denis O’Hare), and the fantastic newcomer Roman (Law & Order: SVU‘s Christopher Meloni), the vamps not only make up a huge portion of each installment, but is certainly one of the most fun arcs, with a twist ending and major consequences to be explored next year.

Not that every vampire is anxious to get involved in the civil strife among their kind. Tara (Rutina Wesley), recently turned, has a lot more to worry about than political allegiances. Luckily, she has Pam (Kristin Bauer van Straten), her maker, there to assist. Pam may be reluctant to help Tara, but the dynamic between them is a true joy, and really adds something fresh to True Blood.

While Bill and Eric are off with their own kind, this leaves Sookie (Anna Paquin) to get into her own trouble, unmolested by her would-be suitors. Fans of True Blood have been divided by the addition of fairies to the story, but given that this is Sookie’s heritage, it makes sense to explore it. Considering her status as a magnet for danger and conflict, of course plenty of that is present as well, but without her vampire protectors this time. Though Jason (Ryan Kwanten) is around, since this concerns him, too.

Thankfully, the season provides some meaningful development to many of the supporting characters this year, too. Sam (Sam Trammell) tries to fend off those who would reveal the existence of all supernatural creatures to the public. Hoyt (Jim Parrack) dives into the bigger players’ circles. Andy (Chris Bauer) has more than one woman to contend with. Alcide (Joe Manganiello) deals with who will lead his wolf pack. Lafayette (Nelsan Ellis) is haunted by his dead lover, Jesus (Kevin Alejandro). All of these people have story in the past, but they really get beefed up this year, making for a more rich, complex tale.

The exception to the praise-worthy list of threads is Terry’s (Todd Lowe) bits. Despite the inclusion of guest star Scott Foley, seeing Terry run out on Arlene (Carrie Preston) to battle a fire monster is very disappointing. The plot doesn’t unfold all that smoothly, and the character fails to come across as noble, as he should. However, one bad story out of all of the others listed above isn’t too shabby, and it’s still a pretty strong season overall.

As usual for an HBO release, True Blood: The Complete Fifth Season has quite a few extras that should make fans happy. Interviews with writers of the show give insight into each and every episode. Five audio commentaries allow the actors to weigh in, too. Episode six, arguably quite pivotal in the season, gets further exploration and discussion. “Authority Confessionals” allow us to get to know some of the new vampires, “True Blood Lines” details many of the characters’ connections, and “Enhanced Viewing” contains reminders of past and future events, as well as giving depth to the details. And there’s more.

True Blood: The Complete Fifth Season is available as a seven disc combo pack that gives buyers Blu-ray, DVD, and digital copies of every episode. In an age where media is in flux, it’s really cool that one purchase would be accessible across many platforms, and HBO should be lauded for putting out such sets, as they have also done for other series. It’s really quite a great idea.

In short, The Irishman, with its combined efforts of genius artists, reflects like a unique gemstone faceted to strike in directed light the most stunning, unique colors. Look for its glorious release on Netflix in November.