A new Pooh feature finds its way, directly, to DVD.

DVD Review: Tigger & Pooh and a Musical Too

Disney's latest direct-to-DVD release, Tigger & Pooh and a Musical Too is a moderately enjoyable trip back to the 100 Acre Wood, even if the title and box art is a tad misleading.  The hour-long film is based on the CG-animated Playhouse Disney series My Friends Tigger & Pooh, which means that playing the role of human counselor to the animals in the Wood s a young American girl named Darby, and not the traditional Christopher Robin.  If that's the sort of thing an adult can learn to accept they might be able to have fun with the film; for children, I don't imagine that it makes much of a difference.

Despite what the box art implies – it shows Darby, Lumpy (a young Heffalump), and Pooh performing on a stage –  and title corroborates, no musical is put on any sort of stage in the 100 Acre Wood.  Instead, it is the film itself which is a musical and features seven new songs.

The story finds Rabbit being made mayor of the 100 Acre Wood for his brilliance in organizing a picnic.  Rabbit is, by nature, an officious and efficient organizer, and while he may have done an excellent job with the picnic, the power of being mayor goes 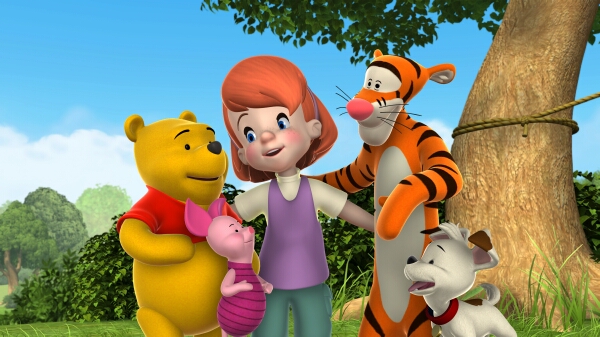 straight to his head.  Rules are created for everything and begin to govern even the smallest part of all the animals' lives.  Hardest hit by the rules is Tigger, whose bouncing is strictly limited.

When things between Rabbit and Tigger erupt, the 100 Acre Wood is split in two (oddly, no mention is made that there are now two 50 Acre Woods, a point I surely would have highlighted).  Rabbit rules one half and the animals who live there, while Tigger takes on the other half.  Things become bad in both parts and – this really isn't giving away any sort of surprise – by the end of the film the halves are reunited and everyone has learned a valuable lesson.

Pooh aficionados will instantly recognize that Rabbit has long had issues with Tigger's bouncing and has before now attempted to curtail it.  In the original Pooh movie, The Many Adventures of Winnie the Pooh (still the high water mark for the series), Rabbit attempts to make Tigger get lost in a misguided attempt to curb Tigger's bouncing.  In this film Rabbit seems to have forgotten the lesson he learned there – you just can't take the bounce away from Tigger.

Despite Rabbit's amnesia, the Tigger & Pooh and a Musical Too is a moderately enjoyable little visit back to the 100 Acre Wood.  The story feels a lot smaller than some of Pooh's big screen films, and personally I would rather it was a Christopher Robin containing work, but the "Super Sleuths" – Tigger, Pooh, & Darby tend to solve problems as a group of detectives –  which take up a big part of the Tigger & Pooh series are kept to a minimal amount of screen time here, which is for the best.

In terms of bonus features, the disc contains a sing-along version of the film, a Rabbit-based game (which does feature a musical and clearly is where the box art picture of a stage comes from), and a Kenny Loggins video, "Underneath the Same Sky," which is a 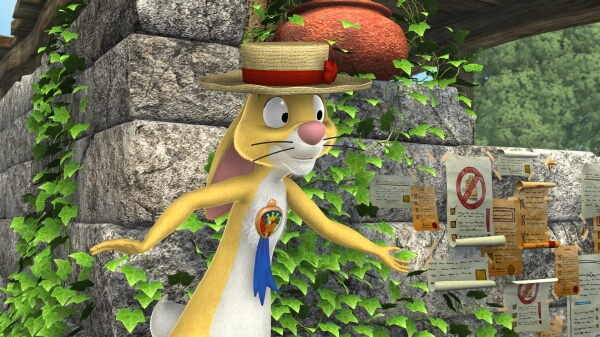 song featured in the film.  None of the bonus features are terribly intriguing, and while some of the songs are enjoyable, I don't see very many people (even children) wanting to sing along using the subtitles.

Anyone going into this movie with the expectation that it will be anything more than an extended version of an episode of the Tigger & Pooh series will be sadly disappointed.  However, taking the series as a benchmark for what to expect, many will actually finish watching this quite pleased.  The movie certainly has some very enjoyable moments, even if it doesn't fully have that Pooh magic.

Here is a clip of perhaps the best (and certainly the most musical-like) song in the film: