The enhancements in this collection make even the worst episode more palatable.

Several times in the Star Trek – The Original Series: Season Three Remastered featurettes, the interviewees mention that the third season exists mainly because the fans demanded it, and not because the studio executives thought they could make any money off of it. The show was moved from Monday night prime-time to late Friday night, facing certain death in that time slot. Producer Gene Roddenberry had left the show in all but name by the third season, mainly over a dispute with the network, and most of the writing staff departed with him. The season was plagued with some of the most infamous episodes in the entire series (i.e. "Spock's Brain" or "Turnabout Intruder").

Season Three is also known for the first interracial kiss on television, between William Shatner as Kirk and Nichelle Nichols as Uhura in the episode entitled "Plato's Stepchildren." In the featurette, "'To Boldly Go…' Season Three," Nichols talks about the scene and how it came about, largely due to Shatner's ingenuity, despite the objections from the director and the network. It's a story that may be familiar to many, but I never tired of hearing about it, particularly from Nichols herself. 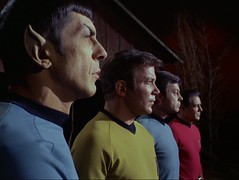 The remastered set does not show the episodes in the order in which they originally aired, and I cannot determine any reason to the new order. If you are interested in watching the episodes in the proper order, you will have to hunt around for them across six discs. This seems to have been the case as well with the previous, un-remastered release in 2004. In fact, the contents of the remastered collection appears to be nearly identical, with only a few notable differences: Both the production art extra feature and the commentary by Michael and Denise Okuda on two of the episodes are not included in the remastered collection. However, the remastered collection contains two featurettes not previously available. Namely, "Captain's Log: Bob Justman" and "Billy Blackburn's Treasure Chest: Rare Home Movies and Special Memories Part 3."

The latter is a feature of the remastered collection across all seasons, and is an entertaining look behind the scenes of the original Star Trek series. Blackburn is an actor who played a number of un-credited roles in the background of many Star Trek episodes, as well as standing in for other actors and providing voice-overs. He enjoyed playing the role of documentary filmer, and recorded over an hour of behind-the-scenes footage on 8mm and Super-8 home movies, of which we are given just a taste in this feature, mainly focusing on the filming of the third season. This is a rare and relatively unfiltered look at the actors, directors, and other people involved in the creation of Star Trek, and is, in my opinion, the most interesting featurette in the set.

There are three types of fans who will have some type of interest or disinterest in this collection. The fans who are interested in preserving the original format of the show will not enjoy this collection because many of the visual effects are enhanced (i.e. more realistic starfields) and/or altered completely (i.e. the Romulan warbird style ship in "The Enterprise Incident"). 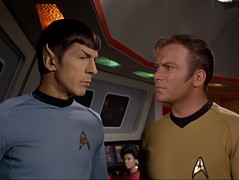 However, fans who are excited to see their favorite show given a bit of a facelift while still preserving the original intent will be pleased. The visual enhancements, for the most part, are not noticeable unless one is obsessively familiar with every detail of the original format, and in most cases, they stand out only against scenes that did not clean up quite as well. The third type of fan who will be interested in this set is the collector who must have every release, particularly if they have as many differences as this one does.

Most of us watched these episodes via their original broadcast or the syndicated reruns on old television sets. At my house, it was an old TV set with grainy reception — we didn't have cable until 1991. Anything on DVD is already heads and shoulders above what was available to the casual viewer until recent years. Now that most American consumers has (or wants) large, high-definition television sets, it is reasonable that we should also want our favorite shows to look their best on them. In this, Star Trek – The Original Series: Season Three Remastered has succeeded.