Last Exit and Red Cockroaches ... present grim, challenging views of the world ... unsettling, but so is the world

Two new releases from the Heretic DVD label showed up in my mail to be reviewed today. Not having anything else happening I decided to treat myself to a double feature and watch them one after the other. That may not have been one of my wiser decisions.

Heretic films specializes in independent films that are “Inventive and cutting edge: scary, violent, gory, and sexy…” Probably not an ideal combination for a calming afternoon double-header, but I didn’t really want to watch them after dark. The thing is that both movies had far more substance than most movies that are churned out by the Hollywood machine these days. 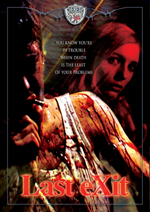 While Red Cockroaches is a futuristic psychological thriller and Last Exit a film noir type look at people on the bottom rung of society’s ladder, they both share a commitment to gritty reality and honesty that is missing from a great deal of film making these days. For those of you who still think of “Sundance” as the epitome of independent film making, these movies will be an eye opener.

Nigel, the protagonist of Last Exit is a multi-time loser down on his luck. Forced to flee his native England because of bad debts to a loan shark, he marries his on again, off again Danish girlfriend and settles in Denmark. Desperate for money he takes a series of jobs storing stolen goods for a thug called the President.

Thus begins his descent from the bottom rung into the pit. He begins a torrid love affair with a prostitute named Tanya (Gry Bay) that alienates him even further from his wife and sucks him deeper into a world of deceit and violence. Even the sex he enjoys with Tanya becomes increasingly surreal, augmented with bizarre light shows and projected images across their bodies.

Director David Noel Bourke has created a pulsating, tension-filled Copenhagen; short, choppy editing, hand held cameras, dissonant music and unreal lighting combine to augment the feeling of a life spiralling out of control. The only times that Nigel and we get any relief are his visits to Jimmie, the existentialist pot dealer.

If such a thing could be said to exist in Last Exit, you could describe Jimmie as comic relief, but in reality he is more like a calm pool in the rapids that are carrying Nigel over the edge. He tries to tell Nigel what he needs to hear to find his way out of his turmoil, but Nigel won’t listen and eventually his final plunge is assured.

The acting in Final Exit is surprisingly good, with the cast able to be convincing in their roles, without the usual B-movie bad acting mannerisms. Morten Bogelius as Nigel is especially capable in his depiction of the ultimate loser. You can see in his eyes the fact that he knows, no matter what he says, does, or thinks, that he is lost. It’s just a matter of time before it falls apart completely.

There are a couple of scenes of violence in this movie that some people might find overt, including me, but it’s not a gore-fest by any stretch of the imagination. The violence is not gratuitous, as it does fit into the scheme of the movie, but if you have a weak stomach there are a couple of times when you should keep your DVD player’s remote handy.

Red Cockroaches, on the other hand, has little on-screen heavy physical violence; all of the violence in this movie is done to your brain and perceptions of life. Plot twists and red herrings abound, with tidbits delivered via television commercials and interviews so that we get our information in the exact same manner as the movie’s characters.

Our setting is at some future point in New York City’s timeline. There are rumours that the acid rain has gotten so bad that it is causing human mutations to occur. Flying cars dot the horizon, but there is still street traffic as well. As the movie progresses the situation in the world seems to be deteriorating on par with the disintegration of the main character’s life.

When we first meet Adam he is drifting. He’s involved with a girl whom he doesn’t seem to really care about, he has a job that means nothing to him, and he’s as bland and boring as anybody can be. One day he catches sight of a striking young woman on the subway platform. They make eye contact, and he is quickly enthralled and walks over to meet her, but by the time he gets to where she was, she’s gone. Mysteriously, right where she was standing a human tooth has appeared.

Without having even talked to her, she seems to have already started to affect his life. He breaks off his relationship with his girlfriend and begins to reassess where he’s going and who he is. The very next day the mysterious woman shows up at his apartment inquiring about the roommate wanted advertisement that Adam had placed. In the end she decides not to take the room and leaves.

On a trip out to his mother’s we find out that Adam’s father and sister both died ten years ago in a car crash. As his mother has reminded him that it is the tenth anniversary of their death, he decides to visit their grave on the way back into town. Mysteriously the woman is there also. They start to have sex but are chased away by a minister. Again she appears to vanish into thin air.

Adam receives a panicky phone call from his mother and rushes out to her house, only to find the mysterious woman there. She is claiming to be his sister. She and the father had been in France at the time of the accident and she claims that the French authorities had kept her alive in a coma for nine years, and she has just awoken recently.

Lilly has already convinced their mother of who she is, but Adam doesn’t want to, and can’t believe this strange woman is his dead sister Lilly. Unfortunately for him and his confused desires, she is able to supply irrefutable proof of her identity, by knowing things that only Lilly could have known.

The problem is that Adam hadn’t been thinking of her as his sister, and isn’t able to get those thoughts out of his mind. Lilly doesn’t seem to be discouraging them either. She acts in a deliberately provocative manner, which results in what can only be described as a type of consensual rape.

Lilly had wanted this to happen so that she could have the excuse to reveal a secret. When they had both been children their father had sexually abused her while Adam had watched. She both hates Adam and wants him to devote himself to her. Eventually he makes the choice, and they become lovers.

All around them the world is getting worse: the city of New York is now sounding alarms whenever it looks like rain so that people can seek shelter because the effects have gotten so bad; mysterious red cockroaches have shown up everywhere and nobody is sure where they came from or what they mean; and children are starting to disappear. Is there some connection between the three happenings, and even more mysteriously could Lilly be in some way connected?

At one point when Lilly is out of the house Adam comes across the tooth he had found on the subway platform. When he breaks it open with a hammer he discovers a small red insect-like creature had been living inside.

Red Cockroaches takes us into places where we don’t want to go. Incest between a brother and sister is one of the big taboos of our society. This movie asks us what would you do, could you pull back if you found out the woman you were obsessing about turned out to be your sister? What lengths would you go to in order to make the relationship work?

We can see the toll this is taking on Adam. At the beginning of the movie he is neat and tidy. He dresses well and takes care of himself. As the movie progresses he lets himself go. His hair gets long and unkempt and he is paying less attention to the rest of his appearance.

We get the feeling that there’s still more to Lilly than meets the eye. Why is she involved with her brother, especially after she has almost accused him of being complicit in her abuse as a child? Is she out for revenge, or is she just confused and messed up from her years in the coma, and the sexual abuse? Either answer would explain her behaviour; half coquettish, half stay away from me or I’ll kill you.

Director Miguel Coyula has done a masterful job of putting this puzzle together, and leading us through the maze of emotions and secrets. He has also done a fantastic job of integrating computer-generated elements into the live action. The virtual and the real blend together almost seamlessly, so that when a flying car flits across the screen it looks like the everyday experience its supposed to be.

His two leads, Adam Plotch and Talia Rubel as Adam and Lilly respectively are called upon to do some difficult and emotionally draining work. Any number of their scenes could have disintegrated into overacting and melodrama, but they and the director have done a fine job of keeping it as real as possible.

Both roles call for degrees of subtlety that would be difficult for many actors to handle, but these two do valiant work in difficult circumstances. Some of their scenes together could not have been easy to perform, and they should be given credit for doing them in such a credible manner.

Like Last Exit, Red Cockroaches deals with subject matter that is far from mainstream and not for the delicate. But instead of being worried about squeamishness, I would worry about the emotional burden placed on the viewer by this movie.

Some may find the end of the movie leaves too many questions unanswered, but relationships like Adam and Lilly’s go beyond rationale; anyway on the back of the DVD box it says something about Red Cockroaches being the first of three movies, so maybe the answers are still forthcoming.

There’s a fine line between violent gross-out B movie flicks, and razor sharp independent movies that go places studio movies wouldn’t dare. Both Last Exit and Red Cockroaches manage to stay on the right side of that line and present grim, challenging views of the world. They might be unsettling, but so is the world. CORRECTIONS:LM