This may be one of the funniest discs I have heard in ages, but it's also damn good music

It’s always nice to see some musical stylings revived. Obviously there are some like Disco that are better left dead and dormant, but there are others which have been long overdue in making a comeback. Well following in the footsteps of the original Jewish Urban Cowboy, Kinky Friedman and The Texas Jewboys, straight from the wilds of Toronto comes, singing of the joys of a good shivtz, Rick Moranis.

Best known for his contributions to exporting Canadian culture abroad via his collaboration with Dave Thomas in the creation of the Mackenzie brothers. Those plainspoken chaps served as major cultural diplomats for Canada during the 1970s. We were taking our first tentative steps onto the world stage and they blazed a trail that will never be lived down or forgotten.

Like all good prophets Mr Moranis spent some years in the wilderness searching for inspiration: ten years in New York City raising his kids and listening to their music. It was revealed to him that the time was ripe for someone to strap on the spurs and mosey on down to the eight track to record and try to match the glory of The Kinky’s “Asshole From El Passo”

The results of his labours can now be heard in glorious stereo in the thirteen tracks contained in his first testimonial The Agoraphobic Cowboy. Before anyone dismisses this project as a putdown or an attack on country music, let me be quick to reassure you. Mr. Moranis’ love of this genre couldn’t be more obvious. He may be using it for satire, but he’s not making fun of the medium.

Making fun of himself for having the presumption to make a Country and Western album maybe; making fun of city dwellers, fame and paranoia: definitely. But if you have any doubts about his genuine affection for the music, they’ll be dispelled when you hear the quality of the musicianship demonstrated on this recording. I don’t know if I’ve heard finer picking and strumming since listening to Lester Flatt and Earl Scruggs. These guys are hot. 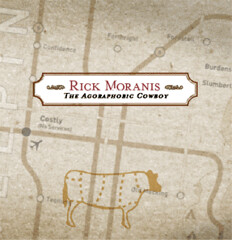 I was hooked form the opening song; a plaintive cry for fulfillment in life, “Nine More Gallons”. Who couldn’t identify with the forlorn appeal of: “It’s hard to pull an empty load/Even if you’re stuck/Seventeen more wheels/ And I’ll have me a truck” Or the awareness of self that slips through with: “Fifty one more cards,/And I’ll be playing with a full deck.”

The songs continue on in this slightly self-deprecating vain throughout the whole disc. Setting himself up as a sort of universal every man who sings about the foibles of the world, he is able to capture and laugh at the oddities of contemporary urban living.

“Press Pound” offers a variety of voice mail options, from pressing one if you’re single to pound key for a restraining order, for your love life, “Mean Old Man” sings the blues about life in a Jewish men’s club where the joys of a sauna are curtailed by the mean old man of the title who is a little enthusiastic with eucalyptus branches, and of course the theme song of our agoraphobic cowboy, “I Ain’t Goin’ Nowhere” itemizes all the reasons for staying home from satellite T. V. to bomb scares.

Of course no CD would be complete without a bonus track, and no country album complete without one song about trains and the The Agoraphobic Cowboy is no exception. But only Rick Moranis would think of combing the two into one song called “Bonus Track”. Tacked on at the end of the album, he sings about all the trains he’s travelled on and that one track that leads home to where his heart lies: “Cause I’m riding on the bonus track”

Moranis’ best creations over the years have been his subtle ones. Gentle satire that peaks out from behind a deceptively ordinary character or seemingly normal circumstances has long been his trademark. His ability to never mug for the cameras but to play the character straight makes the material he presents all the more successful.

The Agoraphobic Cowboy is no exception in that musically it is played completely straight, and with a great deal of respect, and the kick lies in the lyrics alone. Rick Moranis still has an ear for the ridiculous and a satirist’s knack for pointing out some of our sillier habits.

What separates him from so many of the pack is that you never get the feeling he’s doing this with any malicious intent. By making himself the central figure in the songs we know he’s suffering right along with us. This may be one of the funniest discs I have heard in ages, but it’s also damn good music, so even if you buy it just for the humour, don’t be surprised to find yourself tapping your toes right along with songs.

If you want to buy The Agoraphobic Cowboy you’ll have to mosey over to Rick’s web site. You can also sample the wares and read some of the lyrics while you’re there.

Music Review: Tuatara – The Here And The Gone

Take an unforgettable trip with Tuatara and Coleman Barks...