Rebecca Pronsky is a new and exciting vocalist who bears watching.

One of the hardest things to resist when reviewing a musician that’s new to you is comparing them to someone you’re already familiar with. Although it makes your job easier by providing a frame of reference for judging the person’s work, it is also unfair because it means you’re looking to try and pigeon hole them within predefined boundaries instead of letting the work speak for itself.

Rebbeca Pronsky, thankfully, makes it easy to not compare her to others, for the simple reason that she is carving out her own niche. After listening to her six song E.P. The Early Hours I was hard pressed to come up with a contemporary pop artist she resembles, let alone one who I would want to compare her too.

Her musical arrangements owe more to jazz than pop, folk, or rock. When it comes to jazz music my vocabulary is woefully lacking for describing a person’s sound, but Rebecca’s songs swing smoothly and sway to their final destination instead of being propelled by the singular beat of blues based rock.

That’s not to say she is either laid back, or another mellow middle of the road lounge singer. Her songs have an emotional edge that breaks through the usual wall of cool that surrounds so many female jazz vocalists. The band on The Early Hours takes their cues from her and while maintaining a jazz feel, there’s an urgency to their playing that accents the intensity of her voice.

Take for example “Sorry Baby” the final cut on the disc. The rhythm guitar and base keep a steady pulse underneath the vocals and lead instruments, that not only drives the song, but pulls the listener deeper and deeper into its emotional depths.

Ms. Pronsky’s voice is distinguished for its strength and expressiveness. It can issue a bold challenge as it does on the first cut “Border Town”, soar off into the stratosphere and come right back down to earth with the ease of riding an elevator, or, as it does in “Waterways”, be as yearning and wistful as it can be strong and powerful.

While her phrasing shows jazz training, she brings a folk sensibility to her presentation. This allows for a combination of technique and emotion that separates her from so many female vocalists today. Her vocal range is impressive, but she does not use it for unnecessary pyrotechnics, and is sensitive to the needs of the material and the flow of the music.

Rebecca Pronsky doesn’t need to dazzle her audience with technique, and is a mature enough performer to have the confidence in her voice to let it be part of the material, rather than the centre of attention. People are going to pay attention to her singing without her having to resort to cheap theatrics.

The Early Hours is Rebecca Pronsky’s second release, it was preceded by a 2002 solo album called Milestone, but this is your first chance to hear her on disc fronting her full band. You can listen to tracks from her CDs before you buy and check her out live at a variety of upcoming gigs.

There is no Amazon.com link for Rebecca’s album The Early Hours but it can be purchased through her site. 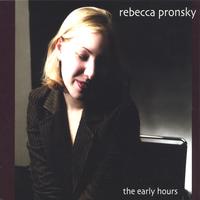