Tracie Morgan is one secret that needs to be blabbed all over North America.

Yep, Tracie Morgan. She’s the best-kept secret in Kingston, Ontario, Canada. I’ve lived in Kingston now for almost 16 years and I’ve seen her singing and playing her guitar ever since I’ve lived here.

Clubs, coffee houses, street corners, anywhere you can play a guitar and sing — Tracie has been there singing her heart out. Yet for some reason she’s still a secret. While others of less dubious distinction have gone on to achieve recognition, she’s continued to remain undiscovered. 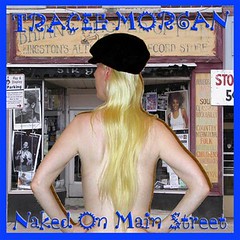 Well she won’t be able to keep hiding her light under a bushel once people listen to her latest release Naked On Main Street currently on sale at CD Baby and reputable download sites, like iTunes, near you. Once you hear this disc you’re not going to forget the name Tracie Morgan in a hurry.

First of all there is her voice, it can challenge you with its strength, seduce you with its husky, sultriness, and pierce your heart with its sharpness. Whether through choice or economics she is the only vocalist (except for electric guitar on one track and harmonica on another, she’s also the only musician) and this only serves to demonstrate the diversity and range of her voice as she harmonizes with herself on every track.

Then there’s what this voice can sing. Driving rock and roll on “Orphans and Ghosts,” teasing blues on “Black Cat, Blue,” hard questioning on “Babel”, and poetic resonance on one of the best covers of Leonard Cohen’s “Lover, Lover, Lover” I’ve ever heard. Helen’s face may have launched a thousand ships, but this siren’s song would have diverted them from their task long enough to at least have bought copies of her CD.

[ADBLOCKHERE]Maybe I’m exaggerating, but can you blame me? Think of what passes for women vocalists these days — squeaky voiced sex toys that squirm around on stage, more interested in being provocative than singing. Or the other extreme who are oh so very serious when they sing about meaningful things like “love,” “heart,” and other equally important new age emotions that have no relationship to the world we live in.

Tracie Morgan’s voice is real; when she sings about love it’s with lines like “you say I will be with you forever except for all those times I can’t be found.” No great illusions there, but no self-pitying whine either. We all make choices and have to live with the results, whether in love, work, or any aspect of life that you chose to dwell on, and Tracie’s songs are real enough to live in that world.

But it’s not a world devoid of humour either, because life would sure be boring if we were serious all the time. “Black Cat, Blue” is not only a great blues song but also an ode to bad luck and all the forms it comes in. It’s not often that a songwriter can make fun of herself with such style and flair, but Tracie manages it here with great aplomb.

When it comes to Leonard Cohen songs I have to admit to a little bit of possessiveness in regards to other people doing his material. They either do pale imitations of his atonal delivery that only he can carry off, or they treat them like delicate little flowers, instead of the muscular poetry that they are.

Tracie doesn’t shy away from any of the emotions in “Lover, Lover, Lover,” whether real or implied. The guitar, percussion, and vocals combined prove equal to the challenges faced when covering a song that’s as identifiable with its writer as this one is, and allows her to come out the other side looking as good as she did going into it.

It’s still Leonard’s song when she’s done with it, but Tracie makes it hers temporarily, and grabs our attention right from the start, holding it all the way through. Leonard may not be here right now, but listen to my version, she seems to say, and it’s well worth the listen.

Naked On Main Street is more than well worth the listen, it’s a great disc from a great performer, one who’s been hidden away in a backwater town in South Eastern Ontario for too long. Tracie Morgan is one secret that needs to be blabbed all over North America.

You can listen to mp3s of “Rain” in either broadband or if you’re like me, primitive dial up, at her web site, where she includes links to places to buy the disc. Do yourself a favour and get in on the secret before everyone knows all about it.