Sometimes I am amazed by the number of truly incredible musicians out in the world plying their craft while flying under most people's radar. Many of them are people who are referred to as sidemen – those unheralded men and women who provide the licks for their more renowned band mates.

They are the ones who stand just out of the spotlight in the videos or during the concert, but without whom the music would suck. Occasionally they will be called forward for a solo, and their names will be announced to an unhearing crowd, then they will fade into the background again.

Once in a while one of these people will take it upon themselves to step out of the shadows and launch his or her own career. Some end up not being able to sustain what's needed to carry a show on their own and go back to being supporting musicians, but others burst out of the shadows and develop a solo career.

Walter Trout started his career as a sideman in 1973 after moving out to Los Angles from New Jersey. He became one of the token "white boy" players in the predominately black blues clubs, backing people like Pee Wee Crayton, Percy Mayfield, Deacon Jones, John Lee Hooker, and Big Momma Thornton. 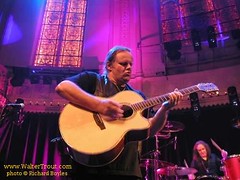 In 1981, he stepped out of the clubs and into the bigger venues when he was asked to join Canned Heat. He was with them until 1984, when he took the next step up the ladder by joining John Mayall's Bluesbreakers. He and Coco Montoya were the featured guitarists for the next five years.

It was in 1989, 16 years after starting out professionally in the clubs in Los Angeles, that he stepped out into the spotlight on his own. Signed by a Danish label and touring agency, he quickly established himself as a major star in Europe playing festivals, large venues, and getting radio time. He release nine recordings in Europe in the 1990s, each one more successful than the last.

His first domestic release in North America didn't come until 1998, and he is only now becoming as established here as he has been in Europe since 1990. At some point I'm sure he will become an overnight success over here, this amazingly hot guitar player appearing as if out of nowhere, after more than thirty years of hard slogging and great playing.

People ask me if they should call my music blues or rock, I tell them they can call it 'Fred' if they must have a label…the blues shouldn't be a museum…the music ought to constantly expand and be alive. (Walter Trout)

Fred is probably as good as anything to describe the music of a man who can play as fast as a thrash metal head one minute and be squeezing soulful sounds out a National Resonator guitar the next. His most recent release on Ruf Records, Full Circle, aptly demonstrates his capabilities by reuniting him with some old friends and comrades from the music wars.

Coming full circle, he's invited those he used to sit in with in clubs, arenas, and concert halls to share the stage with him and his band. So John Mayall is along for two tracks of high-octane blues-rock on "She Takes More Than She Gives" and "Highway Song". Deacon Jones and his B3 organ are along for "After Hours" and James Harman blows a mean and slow harmonica on "A Busy Man."

In 1974, Harman was one of the first people who Walter ever climbed on stage with in a bar – at the time he told Walter he might want to "slow down and get to know some those notes a little." On "A Busy Man" Harman, and Walter do just that, and we see that he can wring just as much emotion from a song one note at a time as well as he can burn the house down.

It's not just old home week on Full Circle as some younger and contemporary musicians are brought into the fray as well. A trip up to Toronto Canada was necessary to record with the Jeff Healy Band for "Workin' Overtime" for some more supercharged guitar work.

All in all, Full Circle features 12 tracks of some of the most amazing contemporary and traditional blues/rock/Fred music you can hear in one collection. Walter Trout loves to play fast and furious, but he's playing each note as if his life depends on it, so unlike some speed merchants, you can still hear that the music is what's important to him, not being a star.

Perhaps that comes from being in the background for years, where the only reason you're playing is because you love to play, but whatever the reason, that love shines through loud and clear on this CD. The guitar work for these songs was done live in the studio. There were no overdubs and mistakes were left in on purpose because they were more intent on creating the experience of having two guitars playing and facing each other than on creating perfection.

Walter Trout may not be the household name that his more celebrated friends are, but what he lacks in fame he makes up in integrity and talent. Full Circle is a guitar lover's dream album, and Fred fanciers will like it, too. I highly recommend going around the circle with Walter and his friends, it's a trip well worth taking.