But, for the Internet to become a true "mass media" like TV or radio, access needs to be made ubiquitous.

High-speed Internet access is transforming not only the presentation and delivery of media and information, but also the way old school, “walled garden” company AOL conducts its business.

Nielsen/NetRatings’ reported recently that the total number of U.S. home broadband users exceeded 102 million in May, an increase of 30 percent over the same period in 2005. 72 percent of all active U.S. Internet users (42% of all Americans) now use broadband, up from 57 percent last year and 33 percent only three years ago. Workplace broadband penetration is even higher: 90%.

It has finally dawned on a huge number of Internet users that to get the most out of their faster, cheaper, wildly capacious multimedia machines we used to call personal computers, they need broadband access to turn the digital stream from a trickle to a torrent. And, with speedy connections to websites for such multimedia fare as audio and video files, games, online photos, and the like, users are devoting more time to their computers. The average PC time per person among active Internetters has increased approximately five hours from 25 and a half hours a month, to 30 and a half hours a month since February of ’03, according to another Nielsen/NetRatings report.

As a result, the NYTimes reports today that in two weeks AOL chief Jonathan Miller will present a proposal to the board of Time Warner Inc., owner of AOL, calling for total transformation of the company from its 17-year-old Internet access service to an ad-supported, free, web-based service company.

This plan will require the board to accept lower profits at first until the advertising revenue grows to compensate for the loss of subscriber-fee revenue, around $2 billion per year. AOL lost nearly 850,000 subscribers in the first quarter of ’06, bringing its total down to 18.6 million. AOL had 26.5 million subscribers in 2002, so the writing is clearly on the wall. 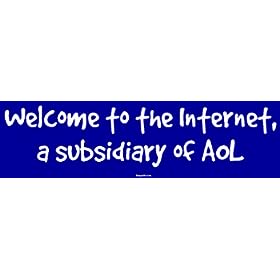 Per the proposed new plan, most of what AOL offers users — content, software and AOL.com e-mail addresses — will be available to all Internet users for free. Exceptions will likely include some advanced virus protection and parental control software, and telephone customer service will probably be reserved for paying users.

AOL looks to sprint forward in page views and ad revenues via the new plan, greatly accelerating the move toward an ad model that began last fall when the company started promoting the new AOL.com site, which features most of the content the company had offered previously only to paying subscribers.

“The relaunch of AOL.com has been the fresh start they needed,” Jeff Lanctot, a vice president with Avenue A Razorfish, an online advertising agency, told the Times. “It caused the marketing community to give them a second chance after a number of years of being a frustrating, hard-to-work-with also-ran.”

But they aren’t there yet. “It appears they are attracting more eyeballs to the service than they are losing from subscribers, but it is not significantly more,” David Cohen, a senior vice president at Universal McCann, a media-buying agency, said. “It does not appear to be a home run, but it is directionally positive.”

AOL has had recent success with new video-oriented sites, like TMZ, a celebrity gossip site, and In2TV, a collection of TV reruns from Warner Brothers, AOL’s corporate sibling. It is developing a new video search service for later this summer, as well.

This entire plan — from video-centric content, to a business model based upon maximizing advertising revenue — is based upon the trend toward ubiquitous access to broadband Internet service, and despite the trend, we are nowhere near ubiquity yet. In fact, media services firm Magna Global USA says that by 2010, 32 percent of the U.S. population –primarily lower and middle-income people — still won’t have an Internet connection, largely due to connection costs.

The new report says that, “Despite falling prices for PCs, the potential for the Internet to become a true ‘mass’ medium remains limited by the lack of ubiquitous access. As a result, endemic advertisers, marketers with e-commerce activities, companies offering deep information to consumers, and those seeking niche audiences will continue to be the primary users of Internet advertising, rather than advertisers focused on mass marketing.”

In other words, the Internet will not have the reach of traditional broadcast TV and draw the mass-market advertisers TV does unless something drastic is done to assure access to everyone. The report suggests free municipal Wi-Fi could make the Internet more of a mass medium than current projections indicate. Free Wi-Fi networks are planned for a number of cities, including San Francisco, which in April announced that a partnership of Google and Earthlink will provide free, ad-supported Wi-Fi service to the city.