Contumacious is not too strong a word to describe biographers who subtitle their tome, eight hundred and fifty plus pages though it may be, “The Life” as do authors Steven Naifeh and Gregory White Smith: Van Gogh: The Life. “The Life” suggests that here the readers finally have the definitive version, the last word—everything we ever wanted to know about what was surely one of the most tortured of lives. Clearly that is not the case. For all its length and detail, it postulates a controversial theory of the artist’s death which is sure to raise at least some hackles and generate some biographical blowback. “Van Gogh: A Life” might have been a more appropriate title.

Viewers of 60 Minutes are most likely acquainted with the authors’ theory about Van Gogh’s death. Long thought to have been a suicide, Naifeh and Smith treat that idea as little more than a tall tale made legend by Irving 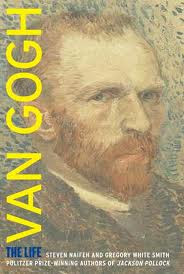 Stone’s novelization and the film that followed, Lust for Life, and a legend filled with holes. While their arguments are presented with conviction, they are arguments, even though they have been around for some time, by no means are accepted by all Van Gogh scholars.

Based primarily on a prior scholar’s 1956 interviews with Rene Secretan, an octogenarian who came forward near the end of his life to explain his own role in the painter’s 1890 death in what he claimed was an attempt to correct some of the romantic liberties taken in the film. Although Secretan doesn’t seem to have confessed to anything other than harassing the painter, whom he and his young friends considered nothing short of a crazy man, he did have access to the kind of gun that people thought must have been the weapon Van Gogh used, a weapon that was never found. Add to this a lot of circumstantial evidence including the facts that none of the painter’s equipment was found at the site where he supposedly shot himself, the peculiarity of trying to commit suicide by shooting yourself in the stomach, Van Gogh’s somewhat less than adequate statements about what he did, as well as a number of other tidbits, and you’ve got the makings of a case.

A case at least for an accident—Secretan was hassling the painter and the gun went off. He was frightened and ran off. The authors never really accuse the young man of actually murdering the painter, but they are clearly of the opinion that, however it happened, it was Secretan and his gun that were involved. Their theory may convince some, it may not others; one thing for sure, it will sell books.

In general, the picture they paint of the artist is not very flattering. For most of his life he is shown as demanding and self absorbed to the point that he was completely unable to get along with anyone, be it family, friends, or fellow artists. Even his brother Theo who supported him for most of his adult life was unable to deal effectively with his extravagant demands both financially as well as emotionally. Certainly though many of his problems were the result of his mental state, the Van Gogh pictured in this book would have tested the patience of a saint, let alone a normal human being.

Strange behavior is often tolerated in great artists. It is the price you have to pay for genius. Van Gogh’s problem was that not until the last few months of his life that his greatness was even begun to be recognized. For most of his life, he was considered little more than a mad man. His work was ridiculed. His impassioned ideas were derided. His behavior was outlandish. Naifeh and Smith are meticulous in documenting the disasters that followed him from his early career working in art sales, his flirtation with religion, and his eventual devotion to art, but through it all Van Gogh is presented as such a head case that one has to wonder how it was he ever managed to create any of the masterworks for which he has become so loved.

Not only does one have to tolerate genius; one has to tolerate all those crazies who may turn out to be not so crazy after all. If anything, the reader comes away from this life, recognizing that often there may be very little difference between genius and madness.

Book Review: ‘Library’ by Dumontier and Farber from Drawn+Quarterly

'Library' by Dumontier and Farber, is a trip through a fictional library with intriguing and beguiling titles.