An intriguing premise in a novel that falls apart under the weight of its complexity.

To begin with a really heavy philosophical question: why does evil exist? And, if one were to presuppose the existent of a benevolent god, how could one reconcile the existence of evil with that of a benevolent deity? It’s a question that most libraries devote an entire bookshelf to, containing titles from philosophers and theologians including Saint Augustine and many of the ancient Greeks. There is, so far, no satisfying solution.

Given that fact, it seems a little pretentious – if not outright ridiculous –  to attempt to tackle that question in a 250-page novel, half of which seems to focus on worldbuilding. Mark Hodder still tries in A Red Sun Also Rises. 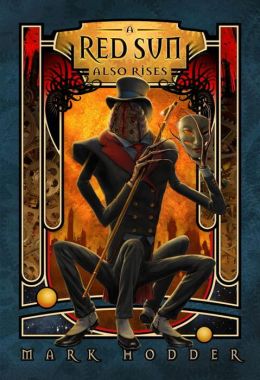 The novel has an intriguing premise: two unlikely heroes, the bookish, shy, awkward priest Aiden Fleischer and his crippled but brilliant companion, Clarissa Stark, are transported from Victorian London to a strange planet which, for some absurd reason, imitates the city they came from. In the process, Hodder proposes a short glimpse of Victorian society, a number of philosophical debates, and a pretty list of literary references that function as the means to explore the themes and ideas he piles on top of the plot.

Unfortunately, it doesn’t work out too well.

The beginning is interesting enough: the story is presented as a lost document from Fleisher, who introduces us into his life. The reader gets the impression, at the beginning, that he’s utterly incompetent, but somehow he’s fun enough to take along for the ride, with his lively, humorous style. And, once he’s joined by hunchback Clarissa Stark, the two engage in a number of intriguing debates while confronting what is possible the most popular historical period to write about these days: Jack the Ripper-era Victorian London.

From there, it all becomes a bit of a convoluted mess. Aiden and Clarissa are transported to a different planet, Ptallaya. Now, at the beginning, the description of this world is intriguing – there are, for example, a few memorable moments in which Aiden wonders whether he’s been transported to Hell and why Hell smells of citrus. However, as time goes on, the world of this mysterious planet becomes more and more convoluted, with four different species that have strange connections to another, psychic powers, the separation of the societies of these species into classes, mind-altering drugs, strange beliefs and magical technology with no scientific basis (the latter not being a crime in itself, but, in addition to all the other preposterous things, becomes simply the icing on a cake of ridiculousness).

Eventually, under the heavy weight of these descriptions and a plot that attempts to beat its way through them, the intrigue of a foreign planet, or the mystery of why it imitates Victorian London so closely, simply dissipates.

In the midst of what is already a fairly packed text, however, Hodder attempts to insert character development. This, though, feels like a strange game of “connect the dots” between who the characters started out as and what they finish as – except that there’s very few dots to connect in between. There’s only an awfully convenient ending of romantic involvement between the two protagonists, which comes out of literally nowhere, and this time I do use the word “literally,” well, literally. Furthermore, this ending is made slightly more disturbing by Clarissa’s convenient transformation by otherworldly magic from a deformed hunchback into a tall, gorgeous woman with no disabilities – as if the lack of physical disability is the prerequisite for the stalwart protagonist to eventually fall in love with her.

Which all culminates in a rather anti-climactic climax, where the supposed problems of, well, good and evil get resolved in the length of something like a paragraph. Of everything in the book, this, perhaps, is the biggest disappointment: given the intriguing, lengthy debates about the nature of evil that Hodder began the book with, I was crossing my fingers for a more thorough exploration of these concepts. Instead, Hodder’s resolution to the problem of the existence of evil became vague, abstract worldplay. I had really hoped that the genre of science fiction could provide better possibilities.

In the end, I’m left wondering about the incongruity of such an intriguing premise (and its captivating first chapters) with the completely anticlimactic result.