The four-disc set contains all 13 episodes, as well as a handful of special features. 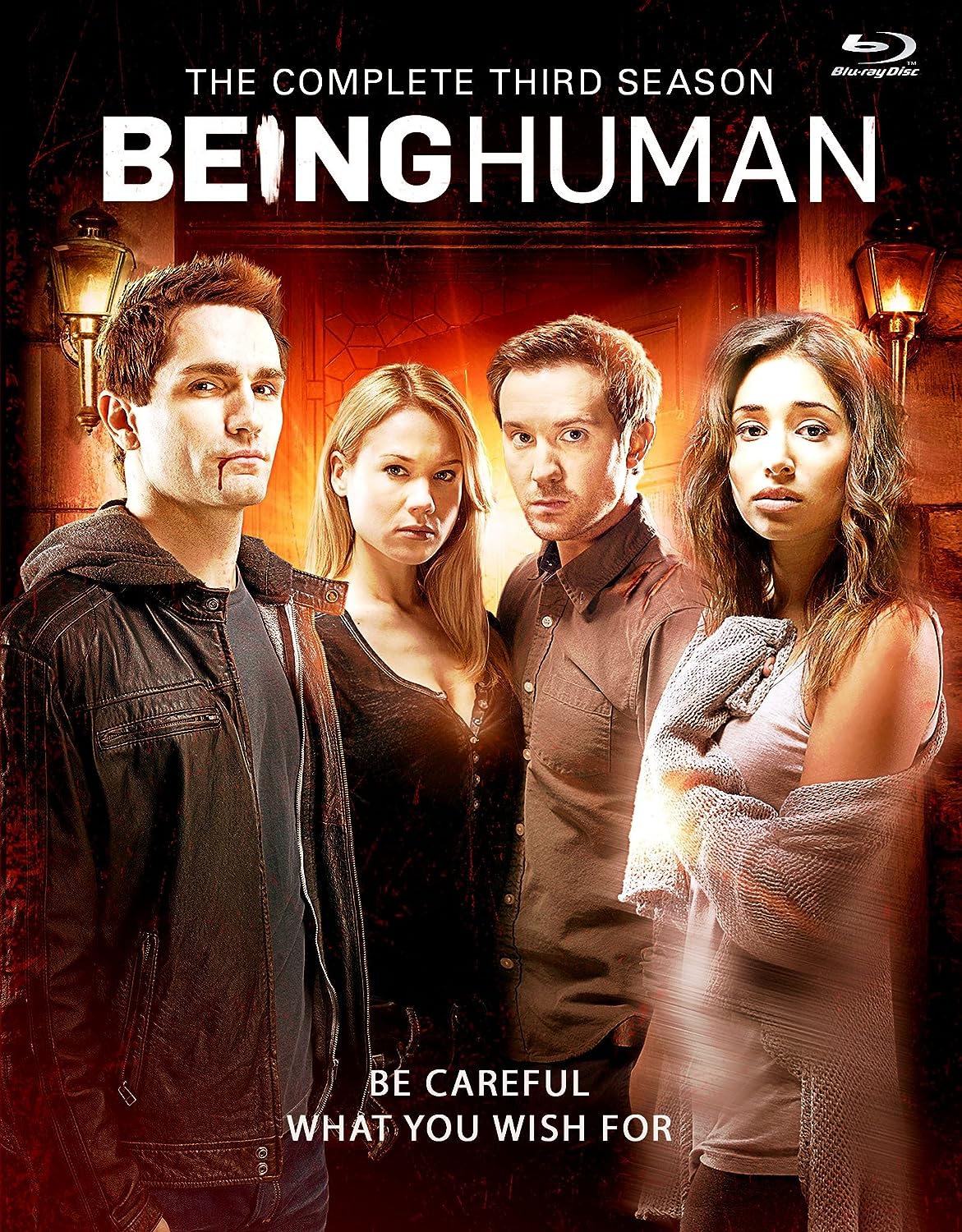 Being Human (soon to be returning to Syfy for a fourth season) is releasing its third season on Blu-ray and DVD. The four-disc set contains all 13 episodes, as well as a handful of special features. It will be on sale January 7th, and is a great way to catch up on a very exciting  batch of installments.

In case you’re not familiar with the series, Being Human revolves around three friends living together: a vampire, a werewolf (actually, two), and a ghost. The friendship of these usually conflicting supernatural types, earns them attention in their social circles, both positive and negative. The series explores how they cope with their relationships and special “gifts.”

When season three begins, 15 months have passed since events in the second season finale. Aidan (Sam Witwer) has been buried in the ground, and Josh (Sam Huntington) and Nora (Kristen Hager) continue to search in vain for Sally (Meaghan Rath), still trapped in limbo. Our favorite characters are now split up, having gone through some experiences on their own.

They soon reunite, of course, and their fondest wishes begin to come true. Sally is brought back as an actual, live human. Aidan is free of other vampires, who are plagued by a contagious, deadly disease. And Josh is no longer a werewolf, having killed his maker. On paper, it looks like everyone has found their happy endings, and they can finally enjoy their existence in the house.

But, as one might expect, this utopia doesn’t last long. Nora still has to answer to Liam (Xander Berkeley) for the death of his daughter. Josh finds himself feeling a little left out, no longer being supernatural like those he loves most, which is really too bad, since he is finally ready to accept the beast inside of him. They both have to decide how much they value Aidan. This does come between them in some ways, but in others, it allows both Nora and Josh to find themselves before permanently committing to each other.

Sally gains a new boyfriend, Max (Bobby Campo), who runs a funeral parlor. Their relationship gets complicated, though, when she begins to rot and develops a taste for human flesh. She really struggles with what to tell Max about the weird stuff, if anything, and it seems unlikely they can maintain a relationship while death hangs between them. Especially when the witch that resurrects Sally, Donna (Amy Aquino), sees something special in Sally that she wants for herself.

Aidan’s story is more rooted in the past. We see flashbacks of his relationship with Susanna (Katharine Isabelle), just after he turned, and how is family is torn apart. This informs his present situation, as he falls for a girl named Kat (Deanna Russo) and considers making a sick boy, Kenny (Connor Price), his new son. If only Blake (Janine Theriault) and the rest of the vampires would continue to leave him alone.

The American version of Being Human has the luxury of a lot more time to serve larger stories than the original British series. One thing I really like about the American series is that is often brings back characters seemingly killed off. Death does not necessarily prevent a character from popping back up when not expected. The series has definite through lines over multiple seasons with its recurring players, and it will be exciting to see how this element informs the show over its lifetime. Season three leaves fans with some major, excellent cliffhangers that will definitely have lasting impact into the fourth run.

As far as extras go, this set is a little light. There are no deleted scenes or audio commentaries, the two most common inclusions in such releases. There are a couple of minutes of OK bloopers for each installment, organized by episode, though they go a little long, and a minute and a half teasing the cliffhangers, but not providing any information about them at all, really. Better is a forty-five minute behind-the-scenes featurette, and fifty minutes of the cast at last summer’s Comic Con are included, which is actually very cool. I wish more shows released their Comic Con panels on disc.

This season is a terrific one in story, even if the special features could use just a little more. Being Human The Complete Third Season is available for pre-order now and will be released this week.