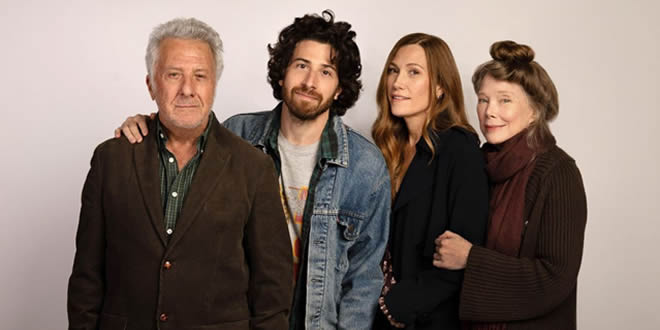 The Austin Film Festival ran October 25 to November 3 in downtown Austin. Not “just a film festival,” it prides itself on being the “writers’ festival,” championing the work of writers, filmmakers, and all artists who use written and visual language to tell a story.

I enjoyed Sam & Kate on several levels. Genre-wise, it’s a romantic comedy, yes, but it goes beyond that in two areas. As its tagline, “It’s hard raising parents,” suggests, inter-generational relationships play a part. It also explores the effect personal tragedies can have on our ability to move forward into new relationships. This makes it much deeper than run-of-the-mill rom-coms.

Much of the comedy comes from the relationship between Jake’s character, Sam, and Dustin’s character, Bill. This is the first time Jake has acted with his dad, if you don’t count his appearance in Rain Man, at the age of 7, where he played “Boy at Pancake Counter.”

Dustin plays a crotchety old guy. The first hint of this comes from his assertion that only little kids call their father “Dad,” so he insists that Sam call him “Bill.” Bill gets on Sam’s case about many things, and Sam counters with his own admonitions. Ultimately, we realize the critical demeanors hide real affection between father and son.

Spacek plays Tina, a charming, lovable lady, with a secret she tries to hide from daughter Kate. Their interactions, softer than those between Sam and Bill, also provide touching and humorous moments.

The film is the directorial debut for writer/director Darren Le Gallo. He managed to shoot it in only 20 days in Thomasville, Georgia. The story plays off small-town culture. Bill and Sam meet Tina and Kate at church. Tina has a problem with her car and Bill fixes it.

Sam, a frustrated artist who works on an assembly line at the local chocolate factory, tries to court Kate at the bookstore she runs. The connection stalls because of a secret Kate keeps from Sam.

Whether your age makes you identify with Sam and Kate or Bill and Tina, the film will touch you and make you aware of the importance and fragility of relationships. Can the past keep us stalled and alone? The film explores this question.

Sam & Kate enters theaters in limited release on November 11, with an original score composed by The Cure’s Roger O’Donnell. You can view the trailer below.

For information about future events and the Austin Film Festival’s year-round program, check its website.

'Women Talking' transports you to a remote Mennonite religious colony where terrible crimes have been committed.