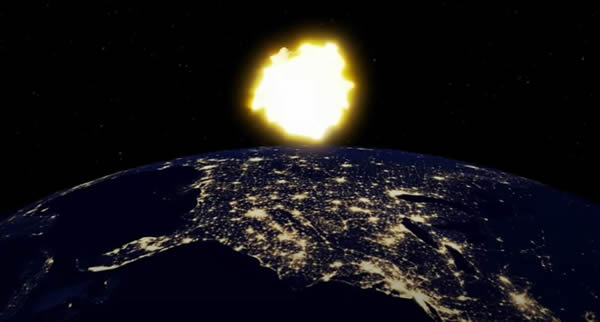 Perhaps the most disturbing film to screen at this year’s Anthem Film Festival was Grid Down, Power Up. The documentary, narrated by Dennis Quaid, explored the vulnerabilities of the power grids in the United States. That may sound like a rather technical subject of interest mainly to engineers, but the film brings home why it should be a concern to all Americans.

In short, according to experts quoted in the film, a total collapse of the electrical grid could result in the death of two thirds of the American population. How could such a thing happen and why is the grid vulnerable?

Scientists believe we may be overdue for a massive disturbance from the sun. This has happened before. On September 1, 1859, British astronomer Richard Carrington, while studying sunspots, observed two patches of intense white light erupting out of the sunspots. Over the next two days the entire world felt the impact.

Massive electrical grids did not exist in 1859, but telegraph systems did. The night after Carrington’s observation, telegraph systems all over the world began to fail. Telegraph operators received electric shocks as sparks flew from telegraph machinery, starting fires, causing contacts to melt, and damaging wires.

The National Academy of Sciences conducted a study of ice core samples in 2008, concluding that the Carrington Event was twice as big as any solar storm in the last 500 years. Should such an event happen today, satellite communications, GPS systems, and, most importantly, the power grid could all go down.

An effect similar to what happened during the Carrington event could be caused intentionally by a hostile foreign power. A nuclear bomb detonated high in the atmosphere above the United States would cause an electro-magnetic pulse (EMP). This would be similar to the effect of the solar flare but only affecting the part of the earth under the explosion.

Such an attack, given our current level of preparedness, would blow out parts of the grid which could not be repaired. Millions of Americans would be without power. Quite possibly cars and trucks would also fail. No power, no food, and no transportation.

An EMP attack would probably cause at least a limited retaliation by nuclear submarines and US forces stationed in other parts of the world, not that that would help the people in the United States. To avoid retaliation, a hostile power might choose to hack into the computers that control the systems.

Electrical systems have been hacked by people demanding blackmail to stop interference. Should a foreign power take this approach, systems could intentionally be overloaded as power is redirected and damage could be widespread. Hackers, possibly North Korean, have broken into American power firms. Russian hackers damaged the power grid in Ukraine.

Grid Down, Power Up does offer some hope. It explains that power systems can be hardened against all forms of these attacks. Unfortunately, except in small, isolated areas, no one is acting. Why?

The film argues that it comes down to money and politics. Local operators feel pressure to keep energy prices as low as possible. They don’t want to spend money on “theoretical” threats. It also cites the “revolving door” effect. People responsible for regulating the power industry, in the Department of Energy and Department of Homeland Security, move back and forth between positions in the agencies and the companies they should regulate.

During the question-and-answer session after the screening, the filmmakers suggested that the solution was to bring pressure on legislators to act. They said that the entire power grid could be secured and hardened for a relatively small amount compared to what is spent on many government projects.

Their suggestions included getting people to watch the film and organizing letter-writing campaigns and petitions. The film will become available online in August. For ways to get involved check the film website or Facebook page. For more about the power grid problems check the Center for Security Policy.

You can find out more about Anthem, including info on all its films, at its website and Facebook page.

Freedom and Communism bring about different results. Two films from Anthem Film Festival show how freedom was lost in one and gained in another.