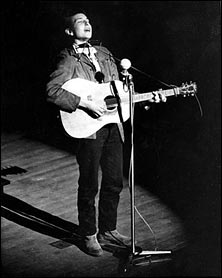 stroked us with the dry calm of age,

cooed angelic honeyed melodies, and seethed with a “voice like sand and glue.”

Dylan speaks to Ed Bradley on 60 Minutes this Sunday night, December 5, in an interview taped last month, his first on television in 19 years.

The former Robert Zimmerman says he never saw himself as a prophet, savior or anything other than a singer-songwriter.

“It was like being in an Edgar Allan Poe story and you’re just not that person everybody thinks you are, though they call you that all the time,” he tells Bradley.

“‘You’re the prophet. You’re the savior.’ I never wanted to be a prophet or a savior. Elvis maybe. I could see myself becoming him. But prophet? No.”

“My stuff…[they]were songs…they weren’t sermons. If you examine the songs, I don’t believe you’re going find anything in there that says that I’m a spokesman for anybody or anything, really,” says Dylan.

His iconic generational masterpiece “Like a Rolling Stone” was recently named by Rolling Stone magazine as the best song of all time. He shrugs.

“Oh, maybe this week [it’s No. 1]. But you know, the list, they change names … quite frequently, really. I don’t pay much attention to that.”

Dylan replies: “This week it is. But you know, who’s to say how long that’s going to last.”

Also discussed in the interview is Dylan’s recently published memoir Chronicles Volume One. The book’s publisher, Simon & Schuster, and CBS News, are subsidiaries of Viacom, coincidentally enough. Spear Shaker reviews Chronicles here, and I have an overview of other recent Dylan literature here.