And the classic ride that inspired the films reopens as well.

World Premiere of Pirates of the Caribbean: Dead Man’s Chest This Weekend at Disneyland

Three versions of Captain Jack Sparrow will be on display at SoCal's Disneyland tomorrow night — the 2-D film version, the 3-D animatronic character, and the real life Johnny Depp — as the Magic Kingdom hosts the red carpet film premiere of the Pirates of the Caribbean sequel Dead Man's Chest, and the private opening of the revamped Pirates of the Caribbean theme park attraction that inspired the films in the first place. 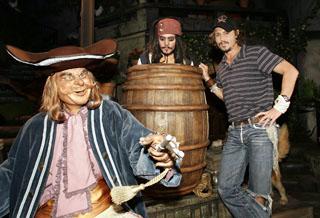 And turnabout is fair play as characters from the Pirates films have been added into the swashbuckling Magic Kingdom voyage where "dead men tell no tales." In the updated ride, Captain 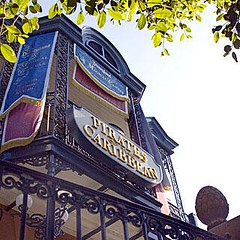 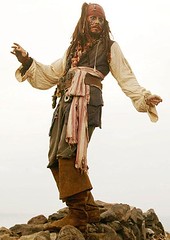 surprisingly lusty rapaciousness to claim a cache of plundered treasure – accompanied, of course, by the sea chantey strains of "Yo Ho (A Pirate's Life for Me)." In keeping with inflation, the ride's main treasure scene now includes 400,000 new gold coins and blingy booty items.

In addition to vying with Captain Jack for treasure, Barbossa captains the Wicked Wench in the famous battle scene just after guests descend through darkness to the lower-level ride proper, 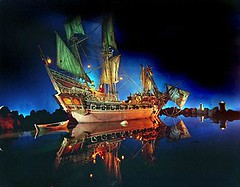 where a pirate galleon exchanges cannon fire with the defending town fortress directly over ride-goers' heads. Special effects have been upgraded to make the cannon blasts more perilously realistic; and later in the ride, the burning town scenes have been made more "fiery" as well.

The third new character in the updated animatronic cast of 68 people and 54 animals is a ghostly Davy Jones, the malevolent spirit of the sea from Dead Man's Chest, who materializes via a new waterfall effect. 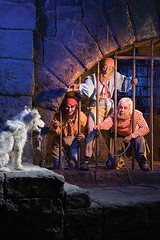 Other changes include an all-new dynamic digital sound design with 270 speakers, the addition of musical cues from the movie soundtracks, and enhanced theatrical lighting designs.

"I cannot imagine how anybody can see this attraction and walk off and say, 'Boy, they did something they shouldn't have,' " said Disney Imagineer Kathy Rogers, who oversaw the ride's creative changes. "It really has strengthened the classic."

"We shall see," I say skeptically, although really does sound pretty good. Why not update with relevant characters and upgrade using modern technology? The attraction, which opened originally at Disneyland in 1967, officially reopens to guests on June 26 at Disneyland and on July 7 in the Magic Kingdom at Walt Disney World in Florida. 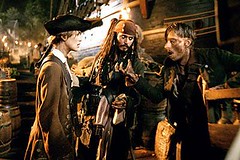 Keira Knightley — and a Disneyland historian and Disney Imagineer, who will discuss the attraction that inspired the movies.

Dead Man's Chest opens to find Will (Bloom) and Elizabeth (Knightley) preparing to exchange wedding vows. But their plans hit choppy waters with the arrival of Captain Jack Sparrow, who owes a blood debt to an implacable Davy Jones (Bill Nighy). The only way the salty rapscallion can elude the wrath of his supernatural pursuer is with the aid of Gypsy queen Tia Dalma (Naomie Harris), whose powers may help keep Jack out of the dreaded locker of his legendary nemesis.