What has not changed is in the nature and use of the visual images of women in the media.

Women’s Rights: In 30 Years How Much Progress Has Been Made?

In 1973 the then Labour Prime Minister of Australia, Gough Whitlam (who looks like an unbelievable radical from the perspective of today), told the Young Women’s Christian Association in Queensland that the Australian Government could not achieve immediately the revolution required for Australian women to develop fully as individuals … “the first and fundamental step towards freedom is awareness by women themselves of their real inequality, the extent of social, political, economic and cultural discrimination”. (The Age, August 25, 1973)

He was speaking as the women’s movement was only just arriving on our intellectually (and then physically) isolated shores. I was a child of seven. I’d never heard of Germaine Greer, and I doubt my Mum could have told you more than a sentence about her. Two years later two of the foundation texts of Australian feminism would be published. I reckon it was about this time that I can recall my father making jokes about burning bras.

This is the world charted in one of the most evocative books on my bookshelf, Media She, by Patricia Edgar and Hilary McPhee (1974), envisaged as a source book, a conscious-raiser for this new-born movement. The introduction says:

“For some readers this book may be the first time they have considered the stereotyping of sex roles and the effects this has had on their own lives.” That would have been true of me, and pretty well all of my contemporaries for the next decade. Personally, I was angry and rebellious about what being female meant, but I had no framework in which to put those feelings.

I went to a would-be-posh fee-paying school, which was utterly unable to decide if it was educating us to be solicitors’ wives, or solicitors. And perhaps that was not entirely the institution’s fault. As the Media She editors wrote:

“Marriage is regarded as the higest point in a girl’s life and women are defined in terms of the institution of marriage: mum, the wife, the spinster who ‘missed out’. Very few Australian girls leave home before they marry so the Australian woman spends all her life in the bosom of her family.”

All of that has, I’d say, at least for the middle class, changed. So what else has, or hasn’t?

Well some of the editorial and advertising looks purely prehistoric now.

There’s the reader’s story “on how to SURVIVE when the LITTLE WOMAN is away in hospital. ‘Guile will win you lots of dinner invitations if you happen to be batching,’ says Sydneysider Ian Mallard. ‘The secret is in the subtle approach.’

Then the furniture advert, the text beside a snap of the “happy couple”:

“Colin and Pru Tatham, both 20, think marriage is a great scene. The Tathams consider themselves liberated, not least when it comes to furniture. They chose Stag Rondo for the bedroom because it is bold and modern, and full of character. Colin might never admit this, but he checked quite carefully on Stag craftsmanship before settling for Pru’s choice of Rondo. Costing about £145, he decided he liked its value for money. Pru just likes Rondo for its looks … “

And jokes you’d be unlikely to see in a mainstream publication today:

Then there are job advertisement here that, I hope, we’ll never see the like of again.

“Come and work with us now! All over Australia young people are joining the National Bank. .. Chances are they’re guys and gals a lot like you … self-reliant, independent. Today’s generation. That’s the type we’re looking for: to train in any one of a dozen careers; to accept promotion on ability, not seniority; to enjoy beneits like superannuation, medical benefits and education assistance.
And girls, there are lots of interesting positions for you too. And marriage grants.” 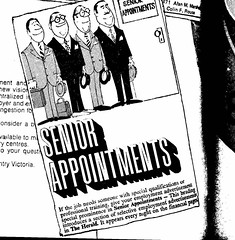 And the response to female political candidates:

“Backbench beauty? Parramatta by-election candidate Mrs Marian Pye would be the most attractive MP in Federal Parliament if she is elected on September 22. But good looks are not her only attribute.”

So yes, we have come a long way.

But then, I start looking at the things that haven’t changed. An advert for a new newspaper says: “We didn’t design The National Times for women. Maybe that’s why so many of them read it. … There’s a lot more to being a woman than just keeping up with new recipes, crash diets and what the Royal Family is doing.” Wish they’d tell today’s newspaper editors – who think stories about hairdos, lipstick and sex are all women want to read.

Then there are the “page three girls” (near-naked models “gracing” the pages of newspapers). Well they’re still in place, although when I look at these models I can’t help thinking how small, and natural, their breasts are, compared to their modern sisters’. (Although surgical breast enhancement did exist. “Don’t consider it until you’re at least 20,” says an agony aunt. Advice well out of date now, at least for would-be “glamour models”.) 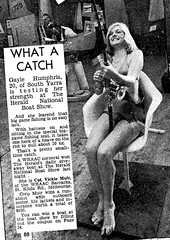 And the weight-loss advert would pretty well work without change today, although the model is probably a bit on the “fat” side … 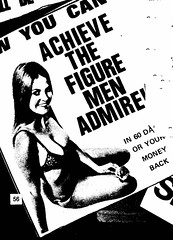 And you might not see quite such an overtly sexist advert today: 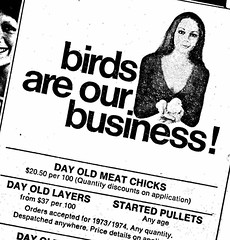 .. well except in the wilder reaches of men’s magazines, but there’s another one, of a scantily clad woman draped across a tyre, that I saw a dead-ringer for on a billboard a couple of days ago.

So, where has this impressionistic survey left me? In employment we’ve coming an astonishingly long way in 30 years – in the expectation that women will have “careers”, in the jobs they do, in their access to at least the middle and upper-middle levels of management and the professions. The cynic in me thinks, however, that Western economies needed these women’s contribution, and no longer has the clerk-typist jobs that they used to occupy.

Then on the level of rhetoric, many things that could be said with impunity in 1974, in slandering half of the human race, are not – at least publicly – sayable today. As the “advertising guru” Neil French found, apparently to his surprise.

What struck me, however, is that what has really not changed is in the nature and use of the visual images of women. Near-naked women, women who’ve “lost weight”, attractive women in vaguely suggestive poses, blonde women smiling nicely – those are the pictures of women we see on the pages of mainstream newspapers and magazines, as we did in the Seventies.

If women want to be visible – and media visibility that is far more valued today than it was back then – they have before them a million lessons in how to achieve it – lessons that say you must be pretty, petite, fair-skinned, preferably blonde, and definitely young.

If you want to find out if you are a Seventies “good wife” I also posted a quiz from Media She.

And if you fancy a bit of earlier Australian history, I recommended a text here.