The moon's dust-covered slopes are a skier's paradise.

The XX Winter Olympics have begun in Torino, Italy — which I always thought was called “Turin,” by the way – are we now referring to the famous cloth as the “Shroud of Torino”? — and today skiers will be schussing, trekking, leaping, twisting, shooting, and otherwise communing with snow on horizontal planks as nordic combined, freestyle, biathlon, and ski jumping get underway in the Italian Alps.

But let’s look to the future and a more distant potential Winter Olympic site, the moon. The moon’s dust-covered slopes are a skier’s paradise. There’s plenty of powder, no wind, moguls and some seriously low-g gravity. With only 1/6th g holding them down, skiers and snowboarders can do tricks they only dreamed of doing on Earth, like say, an octuple-twisting quadruple backflip. Unlike when you’re drunk, crashes really do happen in slow-motion on the moon, so wiping out is casual, bro. 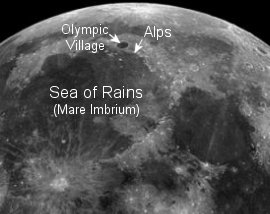 According to NASA, the ideal place on the moon to hold a Winter Olympics is the lunar Alps, a range of mountains named after the European Alps, home to most of the modern Winter Games. The lunar Alps are similar to their terrestrial counterparts in height, breadth and spectacle.

The lunar Alps can be spotted using a small backyard telescope and NASA says this week is an excellent time to try. Train your telescope on the crater Plato, a conspicuous dark oval on the northern shore of Mare Imbrium, the “Sea of Rains.” The Alps begin there and stretch around the rim of the Sea of Rains from Plato through the spectacular Alpine Valley to the towering lunar Mont Blanc. 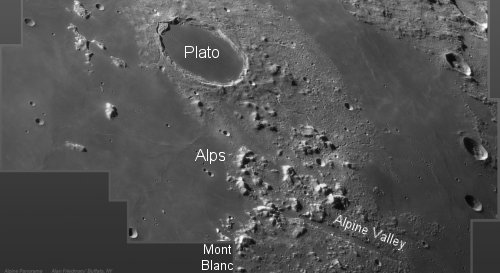 The Euro-Alps, which evolved over millions of years due to the motions of plate tectonics, stretches from France through Italy to Albania, and its the tallest peak is Mont Blanc, 15,700 ft high. The Alps of the moon were formed in an instant 4 billion years ago when an asteroid struck, blasting out the Sea of Rains, which is a crater not a “sea,” and the lunar Alps are the “splash” from that impact.

Apollo 17 geologist Harrison “Jack” Schmitt explains the lunar cross-country skiing technique he developed on the moon 35 years ago. “In the moon’s low gravity you can ski above the moondust, and I did. Imagine swinging your arms and legs cross-country style. With each push of your toe, your body glides forward above ground. Swing, glide, swing, glide. The only marks you leave in the moondust are the toe-pushes.”

Moondust is a real issue, though, because unlike true snow it is very abrasive. For billions of years asteroids have been hitting the moon’s surface, shattering rocks and fusing topsoil into glass. The ceaseless pounding has rounded the moon’s jagged mountains into ski-friendly slopes and coated the moon with a powdery residue of broken glass and sharp-edged, rocky moondust.

Teflon or some new material will be needed to coat skis when NASA returns to the moon, with the first wave of astronauts due to arrive in 2018 or so. To prepare for the eventuality, check out skier Eric Bergoust, snowboarder Hannah Teter, bobsled team member Todd Hays and snowboarder Kier Dillon in NASA TV clips as they take their events virtually to the moon. Bergoust explores whether he could double his quadruple-twisting flip with a perfect landing in the moon’s one-sixth gravity; Teter shows how her skills to hit a front side five might be used to land a lunar spacecraft; Hays uses rocket launches to jump start his bobsled, and Dillon investigates the differences between riding lunar and Earth slopes.