Burn Notics and Blogcritics want you to have a little fun in the sun this summer.

Let me ask you this – what would you do if you were a spy, and a pretty good spy at that, and one day you woke up to find yourself back in your home town, having been blacklisted?  You were falsely accused of a crime, or crimes, you did not commit, not that anyone would listen to you about it.  Well, anyone except for an old buddy of yours and an ex-girlfriend.

I think, quite obviously, you'd attempt to find out the truth about what was going on, why exactly a "burn notice" was issued on you.  You might even get yourself a great cable TV show called "Burn Notice" that focused on your life after said burn notice.  Or, as the folks at USA Network have put it:

USA NETWORK's hit series BURN NOTICE returns Thursday, July 10th at 10pm/9c. Why was Michael Westen burned? And what's he gonna do about it? The answers every Burn Notice fan wants begin to take shape with the Season Two premiere. The new season also welcomes Battlestar Galatica's Tricia Helfer as well as existing cast  Bruce Campbell and Sharon Gless. Join other fans on the official Facebook Fan Page or visit the official site.

Why am I telling you all of this?  Well, outside of the fact that I really and truly enjoy the series, I have stuff to give you for entering a little contest to promote the show. 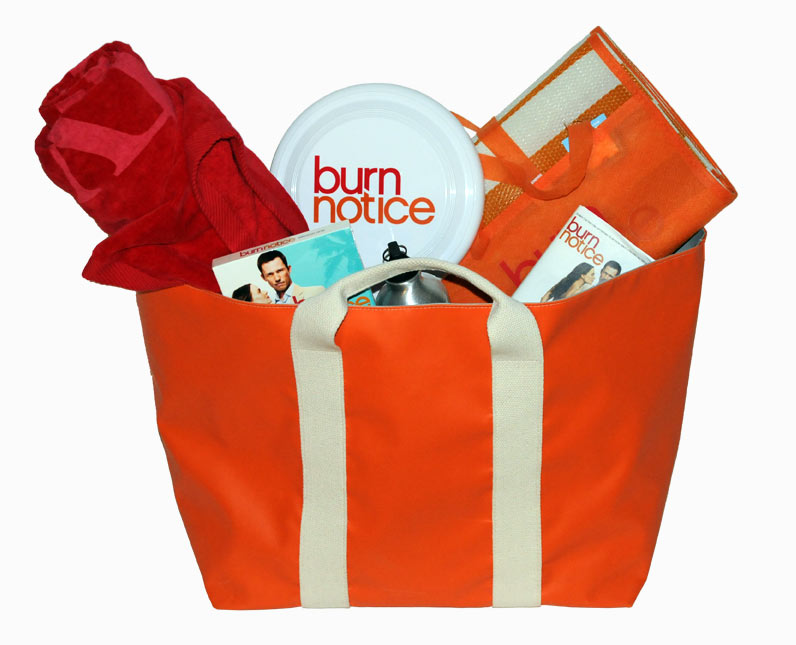 Oh yes, I do.  Here's what I'm prepared to offer you should you win the contest:  a Burn Notice beach bag filled with: – Burn Notice Season 1 on DVD, a Burn Notice book, branded towel, branded t-shirt, and branded frisbee.  Pretty much, it looks like the picture you see to the right.

Now, Blogcritics doesn't only have one of these swell Burn Notice filled beach bags to giveaway, we have two.  That's right, we're going to have two winners who will each receive said beach bag with goodies.  All you have to do is enter the contest, and get randomly chosen as one of the two winners.  Sadly for me, I'm not eligible, because I totally want to win this thing.

The rules are as follows:

Just in case you don’t know quite what Burn Notice is, here’s a scene from the season 2 premiere (USA, July 10 at 10pm).