Unlike the more subtle appeal of a Hilary Duffary, I immediately, intuitively apprehend the many and various charms of Halle Berry, who may well transcend the form-fitted leather slinkiness of Jennifer Garner in Daredevil – a claim not lightly made from this desk.

So, in the upcoming film we have the juxtaposition of the shy, vulnerable Halle (like here)

with the taut feral feline poised to unleash an epidemic of cat scratch fever. 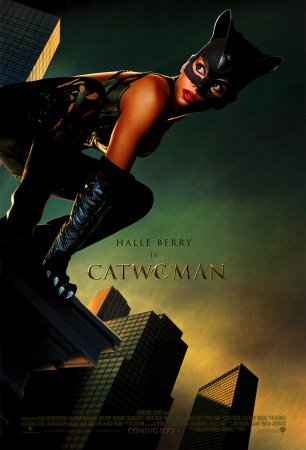 The film arrives July 23, the story is summarized here:

Catwoman is the story of shy, sensitive artist Patience Philips (Halle Berry), a woman who can’t seem to stop apologizing for her own existence. She works as a graphic designer for Hedare Beauty, a mammoth cosmetics company on the verge of releasing a revolutionary anti-aging product. When Patience inadvertently happens upon a dark secret her employer is hiding, she finds herself in the middle of a corporate conspiracy. What happens next changes Patience forever. In a mystical twist of fate, she is transformed into a woman with the strength, speed, agility and ultra-keen senses of a cat. With her newfound prowess and feline intuition, Patience becomes Catwoman, a sleek and stealthy creature balancing on the thin line between good and bad. Like any wildcat, she’s dangerous, elusive and untamed. Her adventures are complicated by a burgeoning relationship with Tom Lone (Benjamin Bratt), a cop who has fallen for Patience but cannot shake his fascination with the mysterious Catwoman, who appears to be responsible for a string of crime sprees plaguing the city.

I am guessing “appears” is a key word in the above sentence.

I enjoy the ambiguity of the transformation of Catwoman from a villain in Batman to a hero in her own right, but one, as they say above, “balancing on the thin line between good and bad.” This could make the film something more than just a hottie-in-catsuit/special efx extravaganza, but the fulfillment of said potential remains to be seen. The hottie-in-catsuit angle appears a fait accompli, however.