Twenty Years Later, Its Achtung Baby All Over Again

It must be getting close to Christmas time.

That would certainly explain all the expanded editions and boxed sets that have come down the pike in recent weeks. From The Who and Pearl Jam, to Brian Wilson and Leonard Cohen, nothing says Merry Christmas this holiday season like your favorite artists re-imagined, remastered and repackaged, complete with everything but the bow on top.

Of all this years crop of deluxe retrospectives however, none of them are as elaborate and over-the-top as the 20th Anniversary Edition of U2’s Achtung Baby. In fashion befitting a band not exactly known for its subtlety, U2 have pulled out all the stops here, providing fans a multitude of options to choose from.

For most, the 2-CD “Deluxe Edition” should prove sufficient. It features the original album remastered, along with a second disc of remixes, B-sides and alternative takes that covers the Achtung Baby period quite nicely, without overdoing it to the point of redundancy — a problem that plagues both of the bigger, and much pricier boxed sets.

Both the “Super Deluxe” and “Uber Deluxe” versions contain six discs and four DVDs, with the latter also including everything from a book and some rare art prints, to your very own pair of Bono’s sunglasses (the same model he wore as “The Fly” on the Zoo TV tour).

It can all be yours, for somewhere around $400.

All excesses aside, this sort of grandoise treatment is certainly appropriate, given an album as pivotal in the overall U2 story as Achtung Baby. At the time of its 1991 release, U2 had just completed its conquest of the world with The Joshua Tree album and tour. But with that same newly anointed status, the inevitable blowback soon followed.

The bombs hurled at the band back then, most often centered around a perception that they had ballooned overnight from a populist phenomenon into a self-important, pompous and overblown monstrosity. Rattle And Hum, their largely failed concert film experiment, did little to quiet the critics — many of whom were put off by its self-congratulatory tone.

Perhaps as a result of this backlash, U2 sought to reinvent themselves with Achtung Baby. Amazingly, they succeeded. The title is influenced at least in part by the German location where sessions for the album began with producer Brian Eno. Here, the band’s mission was to bottle their own version of the synthesized electro-funk rhythms pioneered by German groups like Kraftwerk, and exploited to the greatest effect by David Bowie on his infamous, seventies “Berlin trilogy” of albums (also produced by Eno).

This isn’t exactly how things worked out, and the band eventually returned to Dublin to complete the album with Eno and co-producer Daniel Lanois. Still, they did succeed — even if somewhat accidentally — in reinventing themselves with an album combining the Euro-pop and dancefloor elements the band was initially after, with a rawer, more stripped down version of their former arena-rocking selves.

As such, Achtung Baby is about as far removed from the anthems of The Joshua Tree as it gets (save for the one-world sentiments of the appropriately titled “One”). At the time of its original 1991 release, its comparatively minimalist sound came as something of a shock. What is apparent today however, is that Achtung Baby was the album that set the table for everything that would follow from U2. It still sounds as great today, as it did back then.

If you can actually afford it, one of the best reasons to spring for either of the pricier boxed set versions of the new 20th anniversary edition, is the inclusion of From The Sky Down. This is a great 90 minute documentary on the making of Achtung Baby by filmmaker Davis Guggenheim (best known for the Al Gore eco-doc An Inconvenient Truth).

Since the film was sanctioned by the band, there are times where it carries a certain sense of spin with it. You get the whole thing about U2’s need at the time to rebuild the band from the ground up, by first tearing it down. But at times, there is also a noticeable degree of camera consciousness on the part of the band members. Sometimes U2 appear to be trying a little too hard to present an image of being regular Joes, rather than the biggest band in the world we’ve all come to know and love.

As revealed in this film, it is also quite telling to learn just where the decision to move the band further toward the dancefloor on Achtung Baby came from. As easy — and convenient — as it would be to assume that Bono played the Mick Jagger role to Edge’s Keith Richards (and Bono does namedrop then trendy industrialists like Einsturzende Neubaten here), there was apparently no such yin and yang musical shuffling in play at all. Surprisingly enough, the move towards a trendier sound was arrived at through mutual, democratic consensus.

But the most interesting parts of the film come while watching the creative process behind the making of Achtung Baby itself. It’s fascinating to watch how a half-baked song idea (with the working title of “Sick Puppy” no less) evolves into “Mysterious Ways.” Or how a fragmented chord sequence from Edge is transformed into the genesis of “One,” once Bono adds the melody line, seemingly as an afterthought. 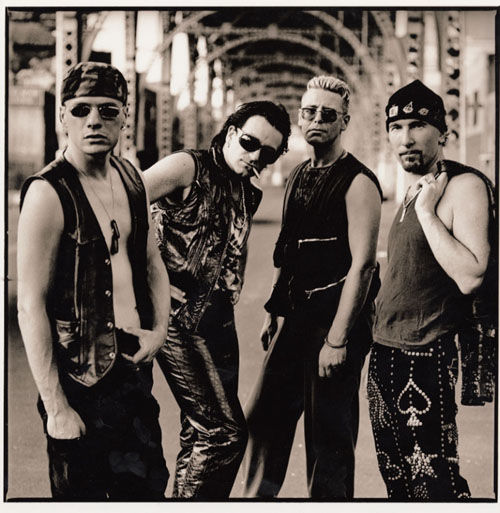 Hopefully, this film will eventually be released as a standalone DVD of its own. But in the meantime — and if you can’t afford the price tag of the box — it’s playing on Showtime all this month.

The other likely draw for fans on the boxed set will be the “baby versions” of the Achtung Baby songs, which make up the sixth “kindergarten” disc. These are mostly bare bones demos, that often feature only Bono and Edge doing very rough takes of the songs on one or two tracks.

Beyond that, the boxed sets mostly suffer from a case of too much repetition. The inclusion of the Achtung Baby companion album Zooropa is certainly a nice touch. But the numerous remixes of songs like “Even Better Than The Real Thing” and “Mysterious Ways” will already be familiar to most of U2’s hardcore fan base. To those hearing them for the first time, these dancefloor mixes offer little more than a quick lesson in the sort of nineties DJ cliches that U2 later employed to mixed effect themselves on the Pop album.

For the best of these remixes, you’ll do far better (and cheaper) with the two-disc deluxe version (the “Fish Out Of Water” remix of “Even Better Than The Real Thing” is especially good). You’ll also get great Achtung-era outtakes like “Blow Your House Down,” and choice covers of Lou Reed’s “Satellite Of Love,” John Fogerty’s “Fortunate Son,” and the Stones’ “Paint It Black.”

Music Reviews: A Deluxe Edition of U2’s ‘All That You Can’t Leave Behind’ Plus Elliott Murphy and a Ska Anthology

A deluxe edition of one of U2's best albums features an excellent concert recording. Plus, poetry from Elliott Murphy and a multi-artist ska collection.