Nova takes an in-depth look at the Parthenon and the reconstruction project surrounding it.

The Parthenon, which has existed for 2500 years, just may be the largest jigsaw puzzle ever created. Despite the fact that all its columns look perfectly straight, as does the floor, and just about ever other piece of marble in the building, none of it is. Thus, the massive restoration project currently underway at the top of the Acropolis in Greece is an incredibly slow and painstaking one.

Nova's latest episode, "Secrets of the Parthenon," uses the restoration project as a stepping stone to discuss the original construction of the building and the Athenian way of life 25 centuries ago. It is an at times fascinating look into an ancient culture that has greatly influenced our society to this day.

The Parthenon itself was built during Athens' "Golden Age," and despite its immense size and weight (many of the marble pieces weigh several tons) it took less than 10 years to construct (historians are unsure whether it was 8 or 9). From that time to this, the Parthenon has managed, at least in part, to stay standing despite being burned, pillaged, rocked by earthquakes, exploded, and suffering a restoration almost 100 years ago that may have done more damage than anything else. 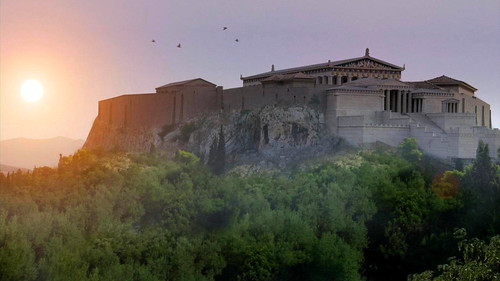 The documentary spends a significant amount of time discussing how all marble pieces used in the Parthenon construction (and there are thousands) can only be put together in one way for it to be correct. Though many of the pieces appear interchangeable, they are not. The differences may be minute, but they are there and purposeful.

Due to the nature of the human eye and the way our minds work, the eye can be tricked (drawing a 3D image on a flat piece of paper is a good example of this). In order for the Parthenon to look as though all the lines were straight, the angles 90 degrees, and the columns perfectly formed, the Athenians had to make sure they were not. They had to bow out the columns, have the floor be raised slightly higher in the center, and perform a variety of other subtle tricks to make the eye believe that what it was seeing was perfect. 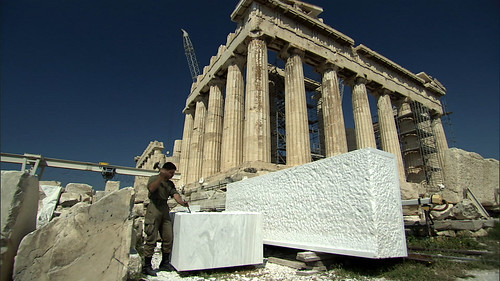 Though the documentary often goes into great and fascinating depth on many of the issues involved with rebuilding the Parthenon there are unquestionably moments where it glosses over some issues. During one part of the documentary, mathematical ratios used in the building are discussed, among them a constant ratio used, according to the scientists, to determine the distance between the columns (at the columns' edge) and the columns' radii. However, it seems as though if the column radius changes (and it does) then the distance between the columns would change as well, thus changing the ratio (at least as described by the documentary). No discussion of how the changing distances and radii affecting the ratio exists (and the show seems to insist the ratio is constant), leaving the viewer moderately confused.

Despite any quibbles behind the math involved, the show is still an interesting look at one of the most interesting structures man has made. An interest in history or architecture is probably a prerequisite for the episode, but it may prove interesting even to those who don't fall into either category.

Nova – "Secrets of the Parthenon" airs Tuesday, January 29 at 8pm ET/PT, but do check your local listings; that's the sort of thing you don't want to leave to chance.