Downton Abbey returns for a second season, and while social issues remain front and center, now they are played out against a background of life and death.

Whoever thinks there is any truth to the idea that you can put lipstick on a pig, but you can’t…had better think again. Some pigs not only wear their lipstick well, it turns out they get a lot of people forgetting their porcine roots entirely. Two cases in point: first, there is the British import just premiering its second season in the U.S. on Masterpiece Theatre, Downton Abbey; second there is the homegrown award-winning series recently announcing its breathlessly awaited fifth season, Mad Men. Turns out you can take what has been one of the least respected TV genres, the oft-ridiculed soap opera, set it back in the past, dress it up with some fancy period costumes, and viewers will not only eat it up, but so will critics, and when push comes to shove, they’ll win themselves an award or two. People who wouldn’t have been caught dead watching General Hospital or As the World Turns will be tuned into PBS with breath baited. They will be looking forward to March, the announced date for the return of Mad Men, with feverish anticipation.

And I must confess not only was I sitting in front of my television for the arrival of the Downton Crawleys and their servants, but my own temperature elevated considerably at the news of Don Draper’s imminent return. Moreover, as far as the return of Downton Abbey is concerned, I wasn’t disappointed. It is two years later, and WWI is raging. The episode opens on the Somme in the midst of the battle. Clearly the stakes for the new season have been raised. Social issues remain front and center, but now they are played out against a background of life and death. The right dress for dinner and who serves it, important as it is, is less important than it might have been two years earlier. Class divisions are beginning to break down more rapidly. The new world that was beginning in the first series is gathering steam. 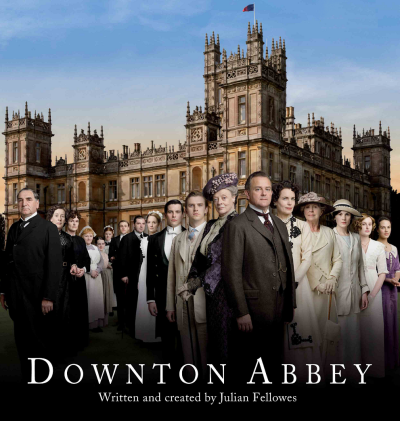 There are still those who aren’t ready to accept it. The irascible dinosaurs like the Dowager Countess of Grantham, played with a knowing gleam by Maggie Smith, and the faithful butler Mr. Carson may not be quite ready to deal with the new order. But, if it was only Matthew Crawley, the unwilling heir to the estate, who seemed to be ready for the changing social values in the first series, now there is a whole crew of converts. Lady Sybil takes up nursing. Lady Edith learns to drive and takes a hand in some local farming. A chauffeur can even look to make advances upon the daughter of the house, and a lady kiss a farmer. This, after all, is not a social tract.

To be sure, the major story lines are picked up with relish. Matthew is now engaged, but Lady Mary has clearly had second thoughts about him. Another romantic entanglement seems inevitable, despite new attachments showing up for each of them. Bates and Anna begin making plans for their future until his estranged wife shows up to make waves, and the honorable valet sacrifices himself for the honor of the Granthams. We can only hope, along with Anna, for his return. The duplicitous lady’s maid O’Brien and the scheming ex-footman Thomas are working their way up to their old tricks. The dowager will continue to try to run things for the family, and Lady Grantham will assert herself gently. It is the war, however, that dominates the first episode—the horror of battle, efforts on the home front, patriotic fervor, and craven cowardice. It looks to be a promising season: world-shaping events with a dollop or two of soap.

Let’s hope that Mad Men’s return slated for March is as auspicious. Those of us who have been feeding our addiction by replaying the first four seasons on Netflix are impatient for news. What happens to Don and Megan? Does the agency make it past the Lucky Strike disaster? Will Betty and Henry stay together? What happens…well, there are a lot of questions, and like any good soap opera, if you can keep your audience salivating with anticipation, you’ve done your job. Downton Abbey has done it; Mad Men has been doing it for four seasons, there’s no reason to suppose they won’t continue.