Nova's latest episode takes an in-depth look at the bonobo.

Nova’s latest episode, “The Last Great Ape,” has the makings of a wonderful documentary. Check that, it has the makings of two wonderful documentaries. As a single piece, it is fails to hold together or hold the viewer’s interest. And that assessment doesn’t even focus on the misleading title that the producers have given the episode. To say that the bonobo is the “last great ape” implies that there are no other great apes. There are, of course, tons of other great apes. They probably mean that the bonobo is the most recently discovered great ape, or, perhaps, the last great ape discovered. That, however, makes for a far less rousing title.

The episode follows the bonobo apes, their discovery, their attitudes, actions, how they differ from humans, how they’re similar, and their genetic relationship to chimpanzees. It then goes on to talk about the difficulty in studying the bonobos, and worries for the bonobos' survival, due to the political strife that currently exists in Congo, which is the only place the bonobos can be found. 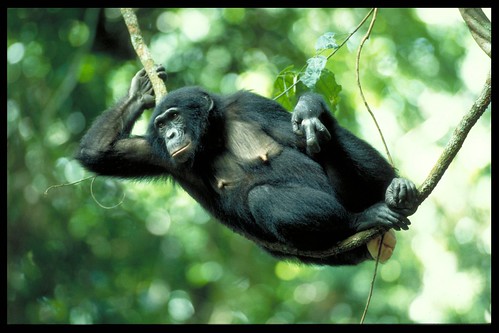 It is possible to create a single cohesive documentary that discusses all these aspects of the bonobos and their lives. Nova, however, did not accomplish that task. Rather, the first half of the documentary discusses the bonobos, and their relationship to humans and chimpanzees. It goes through the bonobo lifestyle, in depth. Actually, the entire thing feels like a classic observational nature documentary, with tons of footage of bonobos in trees, on the ground, fighting amongst themselves, copulating, eating, etc. 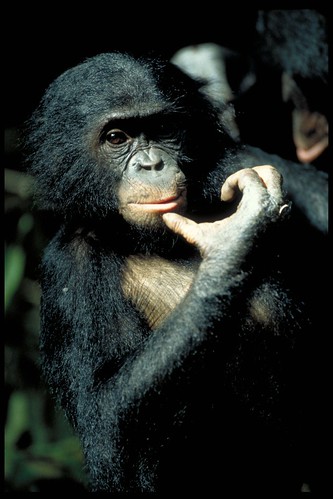 The actual pedigree of the bonobos is vaguely interesting. Humans branched off from other hominoids about 7 million years ago, then 2 million years ago chimps and bonobos branched. Thus, as chimps have always been closely associated genetically with humans, bonobos can be seen in that regard as well. Bonobos, unlike chimps, are far less aggressive, and are formed into matriarchal societies. The documentary argues that by observing both chimps and bonobos, people can better understand human society. Human warlike tendencies are reflected in chimpanzee behavior, and peaceful social actions are seen by studying bonobo behavior.

The second half of the documentary takes a look at the political and social strife and upheaval that have taken place in Congo and surrounding nations. Researchers were forced to leave the bend in the river that marks the home of the bonobos and have only been able to come back recently. They were quite concerned as to what they would find, had all the bonobos been destroyed (bonobo meat has been found at markets), would they no longer allow the researchers near them, had they migrated? Dr. Frances White is, happily, able to find them again and the population seems relatively safe. 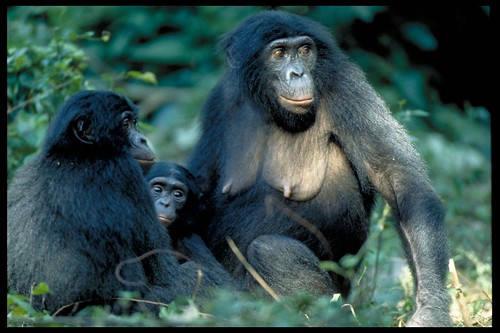 This second half of the episode is a happy story for the bonobos, but it really doesn’t mesh with the first half. There is, unquestionably, a way that these two pieces of documentary can be fit together into a single whole. Sadly, that does not occur here. There is a definite separation between the two pieces and it makes the entire documentary feel rather jumpy. Neither half really feels as though it goes in-depth enough to satisfy the viewer, leaving many questions unanswered.

There is absolutely a certain level of interest which this documentary can arouse, but, it is not among the best, or most engaging, episodes that Nova has put out this season.

Nova – "The Last Great Ape" airs on PBS Tuesday February 13 at 8PM ET/PT (but, as always, check your local listings).