Prepare to be deeply, deeply offended.

TV Preview: Nova – “Family That Walks on all Fours”

Maybe this is too strong, but I don’t think so: I’m amazed and disgusted. The very notion that such a television program could air in this day and age puzzles me and offends my sensibilities.

Imagine for a moment a television program that looks into the genetic abnormalities of the offspring of two cousins who went out and got married. Picture the documentary crew filming such a story in your own backyard. Maybe it's your next door neighbors, maybe they’re first cousins and never told you as much because of the stigma. What if, due to the genetic abnormalities in their offspring, in addition to having serious cognitive issues, were unable to walk upright, and due to your neighbors having so many kids in such rapid succession they were too busy to focus on the problems of five of them (out of the dozen and a half they had). Then along comes a scientist, who posits that the inability of the now-adult offspring to walk upright is some sort of “backwards evolution.” That these people provide an insight into humanity’s development a millennia ago; they actually represent a throwback to pre-humans. 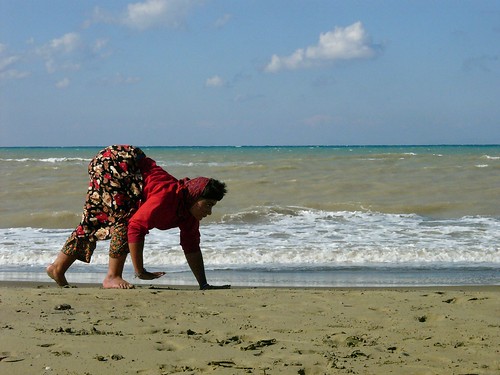 Add to all of this a documentary team for a PBS show visiting the family and lending credence to the notion that your next door neighbors are, in fact, devolving. The documentary provides the opposing point of view as well: scientists who believe the abnormalities suffered by some of the children are more likely caused by recessive traits making themselves known due to the parents being cousins.  The point of the show being put together by PBS is not to exhibit the sad plight of these people, but rather to investigate whether or not your neighbors are, over the course of several generations, going to slowly revert to monkeys.

While it is great that Nova does show the other point of view in their newest episode, “Family That Walks on all Fours,” lending any sort of credence to this devolution, or “genetic throwback” theory at all smacks of sensationalism. I very much doubt whether this sort of “journalism” would be accepted if the family in question lived in the United States. I believe such a story is only viewed as acceptable and amazing because it takes place in a poor area of rural Turkey, a distant enough physical location that some scientists can dehumanize this family without feeling guilty.

Nova makes itself look as an observational, or “fly-on-the-wall” documentary. They purport to simply be viewing the events as they take place and following the various scientists studying the family, and not influencing the goings-on. While an interesting notion, it’s an impossible reality. The act of observation effects that which is being observed (see Schrodinger’s Cat for the classic example of this truth). Events in a small, poor village being recorded by a camera crew are necessarily changed by the camera crew’s presence. In this case, the Turkish army showed up because they were worried about how the family would be represented on television. It is a crime, explains the narrator, for humans in Turkey to be compared to animals, and that is exactly what this whole evolution/devolution notion does. The army showing up at the family’s door due to the presence of a film crew doing nothing more than “observing” has affected the family in a very profound way.

It actually turns out that, with some hard work, the helper of a walker, and some parallel bars that the “hand walkers” can, in fact, learn to walk in a bipedal fashion. It seems as though the family was too busy, too poor, and never had the opportunity to attempt such a corrective measure. The mental disabilities of the offspring remain, and they don’t walk perfectly, but they can walk.

The documentary shows the cerebellums of the adults in question are smaller than that of the average individual, which most likely has an effect on their ability to walk. It is absolutely a result of some genetic abnormalities, and the episode does explain genes and does have some educational value on that level. However, the scientific value of the episode is completely overshadowed by the sensationalism contained therein.

By lending any sort of credence to this “genetic throwback” theory, Nova allows the “Family That Walks on all Fours” to be dehumanized. If these people are not as developed as the majority of our society, then they are somehow less human. Somehow, these people’s genes make them less than human. Maybe it’s then okay to put them behind glass or bars to study them. Maybe it’s okay to mass execute them. After all, they’re something less than human, aren’t they? Are we not students of history? Do we not know what happens when a group of people are dehumanized? Or, at the very least, did we not watch The Elephant Man? “I am not an animal! I am a human being! I am a man.”

Nova — "Family That Walks on all Fours" airs Tuesday November 14th at 8:00PM on PBS.