Does PBS's all-new version of Jane Eyre measure up?

Airing over the next two Sundays as a part of PBS’s long-running Masterpiece Theatre, is a brand new version of Jane Eyre.  Or, at the very least, it’s new-to-you because while it’s aired in Britain, on the BBC, this is its first trip across the pond.  This adaptation stars Ruth Wilson as Charlotte Brontë’s title character and Toby Stephens as the inimitable Edward Rochester.

Most people are aware of the story, Jane Eyre. Abandoned to a cruel school by her family as a child, she grows up, becomes a teacher, and goes to work as a governess at Thornfield Hall, for the mysterious and moody Edward Rochester.  Despite mysterious goings-on at Thornfield, and a rocky start to their relationship, Jane and Rochester fall in love, only to have Rochester’s past come back to haunt him.  The relationship is threatened, looks doomed, but… well, that’s enough of the plot.  Needless to say, the story is often melodramatic, at times spooky, but not wholly without a sense of humor.

Certainly the BBC did not skimp in any way on the production budget, the sets are wonderful, the clothes perfect, and all the little details exactly right.  The acting, too, is good, with relative-newcomer Ruth Wilson more than able to carry the burden of such a large role. 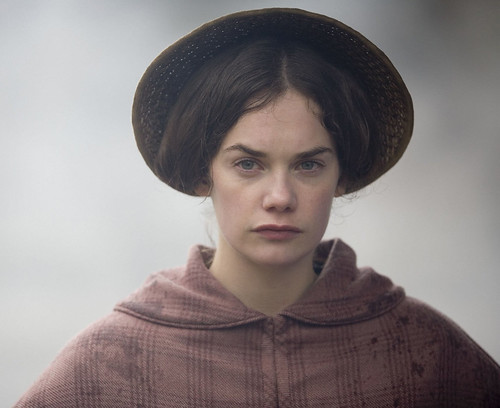 However, there is still something about the first two hours of the miniseries that fails to truly click.  Possibly the problem lies in the overall weight of the production.  Jane Eyre is anything but light fare, and at a running time of four hours, this entire production is in danger of collapsing in upon itself.  It’s not without its light-hearted moments and its humor, but at times all the pieces conspire to form a miniseries that is so crushing it can hardly stand.

Thankfully, the second half of the miniseries seems to shake the weight of the first two hours, or at the very least runs fast enough to avoid its crushing weight.  It is only in the second half of the film that what is just around the corner is less obvious, and is more exciting to watch take place.  It is true that a great number of people watching will already know the story, and thus know what is going to happen, but even so, the second half is more enjoyable than the first.

Highlights of the miniseries include many of the scenes between Jane and Rochester, particularly where it becomes evident early on that the two are falling in love and the moments of their courtship.  Additionally, Jane’s interactions with Rochester’s friends in the first part of the miniseries play out wonderfully (as does the scene with the fortuneteller) as does Jane’s life upon leaving Thornfield.

One of the more fascinating aspects of the entire endeavor actually appears in the press release for the miniseries.  They quote Donna Marie Nudd in the 2001 Norton Critical Edition of Jane Eyre as asking numerous questions about the novel, one of which is “why has there only been one film or television adaptation with a heroine most people would consider plain?”  Shockingly, the Press release states that this “shortcoming” is “remedied in this Masterpiece Theatre production.”  This is fascinating because they’re referring to their star as looking “plain” which is tantamount to calling her ugly.  This should, at the very least, greatly displease Ruth Wilson, and is an incredibly odd 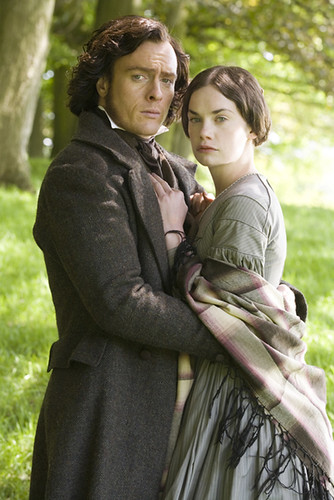 statement to make about one’s star.  And, I think in this case, untrue.

Leaving that aside, this new production of Jane Eyre has a lot to recommend it:  a good story, a cast that performs at a high level, and wonderful production values.  It is, often, a little much, but that may simply be an attempt to better fit itself in with the original work on which it is based.  Though more would have to be omitted from the novel than is here, an hour shorter running time may have made all the difference in this production.

All fans of Jane Eyre, the time period, and the genre will most likely enjoy this Masterpiece Theatre two-parter, even if this version of Jane Eyre does not become their immediate favorite.