Wedding Wars asks the question: What would happen if the percentage of the workforce that is gay went on strike?

A&E's original movie, Wedding Wars asks the question, what would happen if the percentage of the workforce that is gay went on strike? Though it is presented here with a light romantic comedy spin, the underlying point does give the viewer reason to pause.

Shel (John Stamos) is a gay wedding planner whose brother Ben (Eric Dane) is about to marry Maggie (Bonnie Somerville), daughter to Maine's governor (John Brolin). The ongoing tension between Shel and Ben is established early, but when Ben writes the speech in which the governor calls for a constitutional ban on gay marriage, it explodes — just two weeks before Ben's and Maggie's nuptials. Shel, upset that his brother would support such a bill, walks off the job and pickets the mayor's mansion. 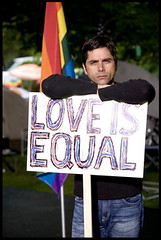 Ben and Shel's boyfriend Ted (Sean Maher) write it off as a temper tantrum at first. For just the slightest moments, the viewer does get a sense that it is more an issue between brothers then a political one, but when the local media picks up on his picketing, a strike of one becomes a strike of the local community, then the state, and eventually the nation. The heart of the issue does come into focus, and the viewing audience learns, along with Shel, that the right to marry is about more than his personal emotions or wanting what his brother has.

Though the issue is politically charged, the film has a way of taking a look at all sides, and the many opinions and perspectives get their time on screen without any single one being portrayed as the absolute solution. Beyond that, the movie keys into relationships, not only between romantic partners, but of brothers and parents and children. It is delivered in a delightfully comedic way that emphasizes those familial bonds.

Wedding Wars entertains as well educates, and ends on a very nice note that confirms those bonds of family while reinforcing the fact that the issue is far from solved.

The film is directed by Jim Fall, written by Stephen Mazur, and produced by Storyline Entertainment in association with Sony Pictures Television. A video clip about the movie can be found on a webpage at the A&E website. It premieres on A&E tonight at 9 p.m..