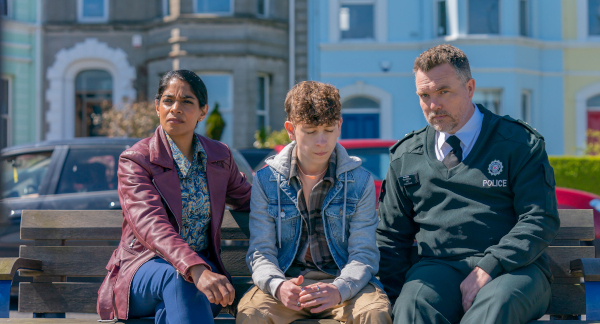 A Return to Northern Ireland

Executive producer and series co-creator Paul Marquess, who hails from Belfast, told me that he was excited about the opportunity to work in Northern Ireland once more after years spent in England. Before pitching the idea to studios, he met with screenwriter and series co-creator Susanne Farrell (Sulphur and White) in Donaghadee to discuss the show. “It felt like it was the right moment for everyone to do something entertaining, mainstream, and warm about Northern Ireland, which I don’t think anyone’s really done before,” he commented about the early process.

Audiences get to know the locals of Port Devine through Detective Constable Hussain, who arrives at the police station as a transfer from England. She has her own reasons for being in Port Devine, but she immerses herself in the day-to-day work of solving local crimes. “She is a very liberal, laid back contemporary woman…They are unknowns to her as she is unknown to them, but they find out there is more to it than that.”

A Fish Out of Water?

Hussain doesn’t start on the right foot with the locals, especially her co-worker, Sergeant Marlene Pettigrew (Kerri Quinn). “In episode two, [Leila] puts her foot in it and gets backstabbed… Marlene thinks at the beginning that Leila is an incoming bully, throwing her weight around. What she realizes is that actually Leila has a big heart and is operating from a place of justice and love.”

Hope Street dedicates a lot of time to the amusing interactions and quarrels between characters, particularly in the case of older residents Concepta O’Hare, Finn’s mother, and Barry Pettigrew, Marlene’s stepfather. Audiences are likely to rate their encounters as memorable moments of the series. “Concepta and Barry sort of represent the past. This is not a show about the Troubles, [because] this is first and foremost an entertaining crime drama [but] you cannot just whitewash the Troubles out. They represent two traditions. They pretend to hate each other, but we know they really love each other.”

“Some of my favorite moments are [when] Concepta and Barry decide they’re better off working together,” he added after considering the generosity and strength they have in common.

Casting in the Age of COVID

Casting the two parts correctly was crucial to getting that rivalry and cooperative spirit. Marquess last worked with Des McAleer in Picking up the Pieces over 20 years ago and enjoyed their off-camera chats. He was excited about reuniting with McAleer. Marquess was also thrilled about Brid Brennan’s performance in the hit film Brooklyn and was eager to get her onboard with Hope Street.

Finalizing everything with casting was a unique challenge due to the pandemic because it was handled remotely. “What we couldn’t do was put Des and Brid in a room together to see if they had chemistry, though I was pretty sure they would!”

Marquess celebrates the contributions of the Hope Street team and crew, especially the great writers. For example, an early episode starts with a beautiful cottage and a predictable meeting with a “classic old Irish farmer.” However, the plot shifts into something completely different a few minutes later into Hussain’s investigation. “We work with a different writer in each episode. We encourage them to bring their own crime stories so we had real variety in tone as well as subject matter.”

Hope Street shares a simple yet powerful message about fostering good communication and a supportive network in your community. Marquess believes this to be especially true of the locality the new series spotlights. “In Northern Ireland, if you are in trouble, people will cross over and help you. They won’t ask what religion you are. That’s what I wanted to capture in this show: people helping out their friends and neighbors.”

TV Interview: Marsha Thomason from ‘The Bay’ on BritBox