Until quite recently, hearing anyone mention Edmond Rostand’s Cyrano de Bergerac would invariably remind me of three versions: the Royal Shakespeare Company production (1984) starring Sir Derek Jacobi, the French film (1990) starring Gerard Depardieu, and of course, the film Roxane (1987) with comedian Steve Martin. However, Cyrano receives a fresh retelling this season in a new adaptation by Martin Crimp at the Playhouse Theatre in London. Directed by Jamie Lloyd, there are many strong points about this production that make it as memorable as the three versions I mentioned.

Set in 1640, the play follows the adventures of poet and swordsman Cyrano de Bergerac (James McAvoy), whose ugly nose makes him reluctant to woo his beautiful cousin, Roxane (Anita-Joy Uwajeh). Instead, he decides to do it via proxy, unbeknownst to handsome new recruit Christian (Eben Figueiredo). Christian, who also loves Roxane, lacks talent with his words and accepts Cyrano’s coaching and penned love letters.

Lloyd’s production is refreshing as it puts a modern spin to the well known story. The number 1640 appears on the back wall, but everything else about the show bespeaks a modern touch to energize and breathe new life into the story. First, Crimp’s script is a love of labor with the language and the pace of the lines, applying a rap or a poetry slam battle framework to it. That structure works well in tandem with another notable element: the sound and composition established by Ben and Max Ringham. Rap beats play over the speakers as audience members take their seats before the performance begins. Transitions between scenes incorporate these tunes as well.

The design by Soutra Gilmour and lighting by Jon Clark are worth marveling at, too. The set may strike one as rather stark at first, with its neutral colored walls and floor, accentuated only by a step and risers. Microphones and a few orange chairs have been placed near the front of the stage. There’s a large mirror at the very back of the stage when Cyrano converses with Ligniere (Nima Taleghani) about his feelings for Roxane. The lighting is beautifully rendered to cast large shadows below, particularly around Cyrano’s nose.

It’s interesting to note that James McAvoy does not sport a fake long nose, unlike what’s typically done in other adaptations of Cyrano. Yet the tension, discomfort, and humor still carry through quite splendidly as other characters ridicule or avoid the subject with Cyrano. Additionally, McAvoy uses a Scottish accent.

Crimp’s script references topics that are more befitting of today’s world. Bad actor Montfleury (Adrian Der Gregorian) initiates a hilarious puppet version of Hamlet’s “What’s he to Hecuba, or he to Hecuba?” monologue, instead of a shepherd’s speech of a more classical era. The blue Gonzo-like puppet is sure to have one rolling with laughter because of how the speech is hammed up, no pun intended.

Ragueneau (Michele Austin) runs a coffee and pastry shop where Cyrano and Roxane meet up a couple of times. It doubles as a place for poets to gather and take lessons from Ragueneau. There’s healthy debate about the changing times and whether “poetry is dead.” The play goes meta here in its analysis of rhyming and poetry, adding humor and some very fun lines. In one scene, Ligniere elicits quite a few chuckles with his remarks, “Give me some steam on the coffee machine.”

Many scenes are adroitly staged throughout the play. One stand-out scene in my mind is when Cyrano, Christian, and rival De Guiche (Tom Edden) are engaged in conversations at different points with Roxane. Four plastic chairs are on stage, some facing the audience whereas others face the back wall. The actors periodically stand and exchange chairs depending on who is participating in the dialogue. It’s a simple and powerful way to keep the momentum of the scene going.

In a pivotal conversation much further on in the play, I would have liked to have seen a little more interaction between Roxane and Cyrano. The heartfelt lines, though strong and sincere, would have been better delivered to each other rather than by each one facing the audience.

Jamie Lloyd’s Company employs other innovative techniques to make Cyrano a strong production. Cyrano and his compatriots under the command of De Guiche must fight what appears to be a hopeless battle. To represent the men dying, the microphones and by extension their poetic voices simply get disconnected.

In other scenes, a lively atmosphere is created through the actors doing beatbox on the mic. Cyrano’s poetry and sword duel with Valvert (Nari Blair-Mangat), a henchman of De Guiche, is enlivened when McAvoy uses the microphone cord like a jump rope. The fight is expertly choreographed and directed by Kate Waters.

Uwajeh, Figueiredo, and McAvoy display strong chemistry together to shine light upon the joys and trials of the love triangle their characters go through. Standout actors also include Austin and Taleghani. Austin’s sonorous voice as Ragueneau lends a sensitivity to Cyrano’s plight and a masterly touch to the joyful and cautioning instruction of the poets in training. Taleghani brings to life a brilliant Lignere, particularly in a poignant set of lines early on and a challenging line of “cut me, cut me” as he reflects about his belief in free speech.

Cyrano de Bergerac as adapted by Martin Crimp and directed by Jamie Lloyd is a fantastic play to go see, whether you are a longtime fan of Rostand’s text or coming to the story for the first time. The bold staging and script choices are exciting to take in from opening moments, and serves as an example of how we can envision these stories within the 21st century. I’m not saying to leave the old texts behind, but it’s a brilliant exercise to wonder what a beloved character would say about the topics we wrestle with today.

Cyrano is a remarkable addition to the Jamie Lloyd Company’s portfolio, which includes the critically acclaimed Betrayal with Tom Hiddleston and the Pinter at the Pinter series last year in London’s West End. If you find yourself wanting more from the company, be sure to check out Emilia Clarke (Game of Thrones) in a new version of The Seagull in March 2020 at the Playhouse Theatre.

Performances of Cyrano de Bergerac continue through February 29, 2020. The Playhouse Theatre is located on Northumberland Avenue, Charing Cross, London. Tickets may be booked through ATG tickets. If you can’t make the trip to London, clear your calendar on February 20 for the National Theatre Live broadcast at a movie theatre near you. 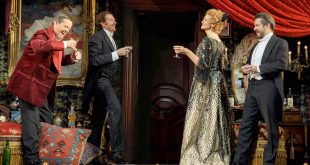 As Sarah Bernhardt circa 1897, confronting Shakespeare's best-known character, Janet McTeer's dynamism astounds. Her Bernhardt is a whirlwind of delight and shimmering brilliance.