Jon Sobel May 17, 2008 Comments Off on Theater/Dance Review (Brooklyn NY): The Judgment of Paris by Austin McCormick and Company XIV 199 Views

Here's a little secret of the critics' trade: we don't know half as much as we seem to. It's our lightning-fast research skills that enable us to quickly write something halfway intelligible with that unearned air of authority we're so proud of.

We like readers to think we know an awful lot. And we're pretty good at fooling people – at least some people, some of the time. Other times, though, it's best not to bother. Medieval Japan, for example – I know hardly anything about that, and I wouldn't try to seem like I did. Same with hedge funds. And cribbage.

Here's another one: Baroque dance. This refers to European (notably French) dance styles that predate ballet. I only know that much because of a chance conversation I once had with a bartender who – this being New York City – was, of course, in real life, a Baroque dancer.

That's all I knew, prior to last night. And I don't know much more now, even after seeing Austin McCormick's dazzling new dance-theater piece, The Judgment of Paris. The production mixes modern, ballet, and Baroque dance forms with several centuries' worth of music and storytelling to create a colorful, sad, comical-tragical new presentation of the story of Paris's fateful decision to award the golden apple to Aphrodite and its ramifications for the beautiful Helen of Troy and the whole ancient world.

Barely into his mid-twenties, McCormick is a gifted choreographer with a deep knowledge of early dance forms. He also has a flair for spectacle and a sharp ear for the right music to complement his vision. His company of six performers handily plays a variety of roles, dancing gorgeously, speaking, and in the case of Toby Burns, who plays both Paris and Menelaus, singing. (Burns's exquisite baritone would do any opera company proud.)

We can recognize seeds of the classical ballet movements we are familiar with in the courtly 17th century dance techniques that McCormick incorporates into his modern work… I think (see paragraph 1 above). Some of the wonderful costumes are authentic to that time… I think. 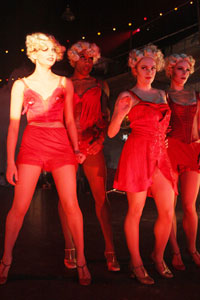 What's certain is that the historical elements are artfully merged with modern dance movements, abstract and literal, slinky and angular. This is a pretty sexy show. Parts of it are inspired by the Folies Bergère (fans of the movie Moulin Rouge will love it) and it uses music from Offenbach's showy operetta La belle Hélène.

The rest of the music and the text comes from sources as varied as Arvo Pärt, Pergolesi, Joyce Carol Oates, Charles Mee, Jordi Savall, and Aeschylus. But far from a pastiche, the work impresses as an integrated whole. McCormick's broad vision takes full advantage of the company's large space, a converted tow truck warehouse by the Gowanus Canal in Brooklyn. The staging and music mixing (all by McCormick) are emotionally powerful, and the set, costumes and lighting are all top notch. But the heart of the show is McCormick's choreography and the agility and sensuality of his dancers. You do not need to be a dance aficionado to get swept up in these visions and sounds. The ovation the cast received at the end was fully deserved. 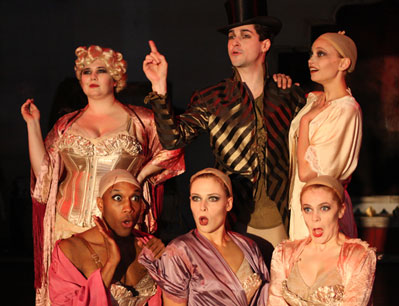 One might quibble with a few aspects of the production. Some psychological aspects of the myth of Paris and Helen get unnecessarily short shrift, given the sensitivity with which the show treats other parts of the story. Some of the dances in the second half, while beautiful and affecting in themselves, drag down the tale itself with their length and slowness. But these are easily dismissed amid the grand spectacle. Catch this show, it's something unique and special. 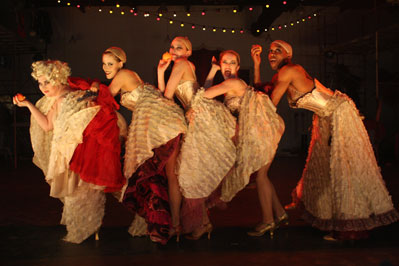