Maeve McGuire plays Gertrude as a real mother rather than a psychological construct.

Theater Review: The Heart of My Mystery: The Hamlet Project

With The Heart of My Mystery: The Hamlet Project, Barbara Bosch and Mark Ringer have pulled off a neat trick: giving a fresh twist to Hamlet, while presenting a true, cathartic, and very good production of Shakespeare's most iconic and psychologically complex play.

Interrupting the action of the play with quotes from four centuries of Hamlet commentary sounds like it would be awkward or too cerebral, but turns out to have been a small stroke of genius. Delivered by the actors (who step out of character at opportune moments) from sources as diverse as Voltaire, Freud, and Stephen Greenblatt's excellent recent biography Will in the World, the commentary, far from coming off as a self-conscious meta-theatrical device, is interesting and often just plain funny. The idea, according to the program notes, is to place the play "in juxtaposition with the critical response it has inspired" and create "an irreverent and scholarly study of Hamlet." That it does, but the result is not a dry experiment but a first-class entertainment.

The cast of nine, solid from top to bottom, is the foremost cause of that success. It seems almost unfair to single out any single performance. Bosch pushes her actors to find the conversational rhythms in Shakespeare's poetry, and they do so with amazing success. The few exceptions to the naturalism, like Rand Mitchell's herky-jerky Ghost and Antonio Edward Suarez's mugging Guildenstern and Osric, provide satisfying doses of oddity and broad humor.

Natasha Piletich's heartbreaking Ophelia deserves a special mention, not because she outshines others in the cast, but because what she does with her part is unusual. Often the heroine's madness is played as a result of weakness of character; she becomes a fluttery, ghostlike lunatic. In this production, by contrast, over-the-edge Ophelia is just a tiny step from sane Ophelia; from her dark eyes the exact same person looks out. It seems natural to witness such a spirited, dangerously emotional person – a type we've all met in real life – addled by extreme grief. Piletich's performance makes this difficult character more real than any recent interpretation that comes to mind. 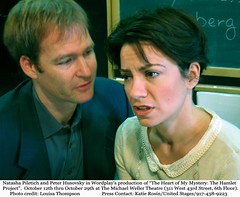 Can one review Hamlet without saying something about the lead? Suffice it to say that Peter Husovsky is thoroughly convincing as Shakespeare's haughty, tragically troubled, and in this case surprisingly funny prince of indecision. He gets able support from Maeve McGuire, who plays Gertrude as a real mother rather than a psychological construct, and Bob Adrian as a gangsterish but desperately tormented Claudius. Bryan Webster holds down the story's emotional center as the loyal Horatio, and co-adapter Mark Ringer fulfills the comic promise of the blowhard Polonius even without the benefit of the "Neither a borrower nor a lender be" speech – one of the more obvious of the many cuts.

Those abbreviations, and the fast pacing, allow the play to clock in at under two hours even with the commentary. I highly recommend this production for all ages and tastes – except, perhaps, for someone unfamiliar with the play, who should to see an uncut (or less cut) version – sans knowing commentary – first. This clever and lively adaptation with its capital cast deserves to be filling a much larger theater than the tiny off-off-Broadway space in which it plays until October 29. If you're going to be in New York any time this month, get thee to a phone or a computer (you're already on your computer, aren't you?) and get a ticket.