The role of the half-crazed Princess is gloriously larger-than-life, and Joanna Bayless knocks it out of the park.

There's no law that says a small space can't hold a big production, and Terry Schreiber's revival of Tennessee Williams's Sweet Bird of Youth thinks big. It has to, to accommodate the play's large themes, outsize characters, and grand poetic speeches, all vintage Williams.

Drifter Chance Wayne returns to his Southern home town intending to reclaim his one true love, Heavenly Finley, who happens to be the daughter of the corrupt, bigoted local political boss. Chance's secret weapon is aging actress Alexandra del Lago, who, believing she has blown her last comeback attempt, has "disguised" herself as the "Princess Kosmonopolis" and adopted Chance as caretaker/gigolo. He hopes to use her connections to further his own failed acting career and bring his true love with him. The South's last stand against federally enforced desegregation is the backdrop. Violence occurs both on and offstage, both physical and psychic.

Get the feeling the story doesn't end well?

Yes, the play is a tragedy, at least for most of the characters. Though quite funny in places, it moves slowly, like a stately pageant, through three acts and three-plus hours – a rich story with big, exaggerated personalities. Paul Newman and Geraldine Page created the roles of Chance and the Princess in the original 1959 Broadway production, and starred in the 1961 movie. Irene Worth won a Tony in the latter role in a 1975 revival, which also starred Christopher Walken. Schreiber doesn't have the big names at his disposal that Elia Kazan and Edwin Sherin did, and not surprisingly, this production's most significant strengths and weaknesses both lie in its casting. 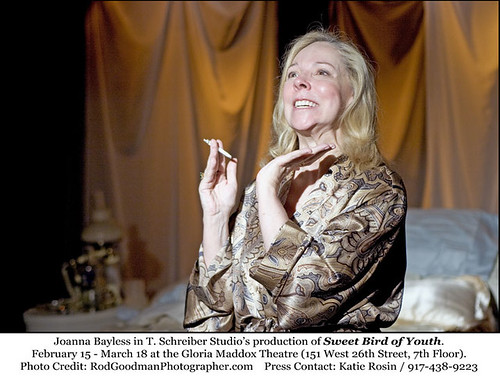 The role of the half-crazed Princess is gloriously larger-than-life, and Joanna Bayless, more than up to the challenge, knocks it out of the park. Whether outmaneuvering Chance in a prolonged battle of wills, hyperventilating in what would today be called a severe anxiety attack, or suffering an embarrassing public collapse, she takes complete command of her every scene. Bayless bares the humanity behind the haughtiness, simultaneously embodying proud grande dame and lost, sick soul.

As Chance, Eric Watson Williams seems lost too, but not in a good way. Though he looks the part, he doesn't come off as the charming, virile scoundrel he's supposed to be. He seems stiff, sure of his lines but uncertain of his rhythm (and his Southern accent). As a result we find Chance hard to sympathize with – he should be a complex character, a cynical dreamer, but he lacks focus. Only in his almost wordless final scene does he come fully to life. Then we glimpse the depths to which Chance Wayne's peripatetic life has really taken him. 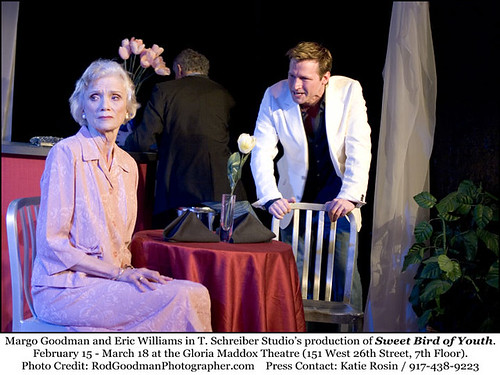 David Donahoe as Boss Finley dominates his scenes as effectively as Bayless does hers. Cocksure, hypocritical, spitting mad, fiercely protective of his daughter's honor even while using her for political gain, the stalwart separatist seems as real as a lynch-post. Timothy Weinert also does good work as Finley's fiery son, while Shelley Virginia is the picture of tragedy as the ruined Heavenly. Andrea Jackson makes a swaggering Miss Lucy, and Jack Drucker and Margo Goodman do well with important small roles. Effective lighting and sets, and dreamy, if somewhat repetitive, jazz music add to the drowsy backwater atmosphere established by the calculatedly lazy pace Schreiber sets. Though not the very best of Tennessee Williams, it's a powerful piece that just needs some more power at its center.

An eclectic anthology collects the songs that made Billboard's Top 100 in one week of August 1957. Plus, Marvin Gaye and Diane Huber.